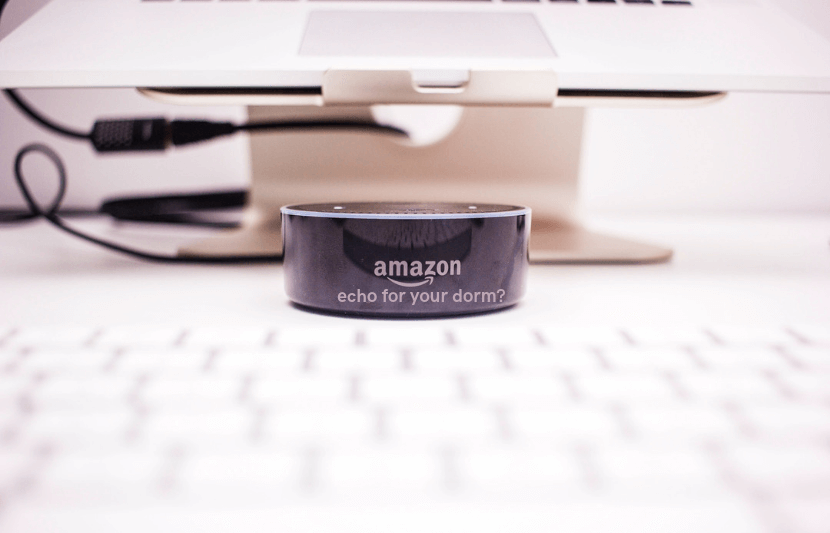 The Amazon Echo and other smart speakers have exploded in popularity over the past couple of years. Powered by Amazon’s Alexa voice-control system, the Echo can be used to answer questions, create shopping lists, wake you up in the morning, stream music, and much more.

But should you get one for your dorm room? That depends. Is a smart speaker necessary for college? No, not necessary, but it can be a convenient productivity accessory. Students can use digital assistants to get answers for homework, set reminders for assignments, and organize events on its calendar. Some universities even provide them for their students.

Here are a couple of things to consider before you purchase an Amazon Echo for college.

If you’re living in a dorm, you may not be able to connect your Amazon Echo to the school’s WiFi network. Many schools use WPA2-Enterprise network security for their WiFi network, which requires you to enter a username and password. Amazon Echos aren’t compatible with this kind of network — they require a direct WiFi connection and can’t be connected via an Ethernet port. This isn’t necessarily a dealbreaker, as your school may have configured a way to work around it. Check with your school’s IT department to see what kind of WiFi network you will have access to, and if it is possible to connect an Amazon Echo to it.

Amazon’s Alexa software has raised privacy concerns. In April 2019, Amazon admitted that its employees listen to Alexa conversations. Teams of Amazon employees transcribe and analyze voice recordings captured by Alexa in order to enhance the software’s speech recognition. Amazon also collects advertising information based on your interactions with Alexa. All of this has created the perception among skeptical consumers that Amazon Echos are spying on their owners. That claim isn’t exactly fair.

The microphones in Alexa-powered devices are always on, but they only begin recording and sending your conversations to the cloud when prompted by a “wake-word,” which, in Amazon products, is “Alexa.” So in a sense, your Amazon Echo may be hearing you, but it isn’t always listening. Still, the privacy concerns are sure to raise the eyebrows of more than a few people out there. If you are living with a roommate, make sure you run it by them before you bring in a digital assistant.

Amazon is not the only company that produces smart speakers. Google and Apple have both released smart speakers powered by their own digital assistant software (Google Assistant and Siri, respectively). Each has its own advantages.

At this point in time, we think Alexa-equipped speakers are the best option for most people. The Amazon Echo has been around longer than the Google Home or Apple HomePod and the competition is still playing catch-up. Amazon allows third-party creators to make “Skills” apps for Alexa, so the Echo’s capabilities are ever-growing. Some skills should particularly appeal to college students. The Domino’s Pizza Skill, for example, enables you to order a pizza through your Alexa. Among some new features announced late in 2018, Alexa is also capable of reading and replying to emails, a helpful feature which Apple and Google’s smart speakers are unable to do as of yet.

Google got in the smart speaker game later than Amazon, but they have quickly gained ground on the industry leaders. The Google Home’s major advantage is its search capabilities. With the world’s most expansive search engine at its disposal, the Google Home can answer pretty much any question you throw at it. The Google Assistant also has the best voice recognition, and is able to interpret commands and questions better than Alexa or Siri. It also takes advantage of some of Google’s other services, including Google Translate and Google Maps.

Apple’s HomePod is a wonderful but not-so-smart speaker. By far the most limited digital assistant, Siri voice recognition works well, but it has a limited set of commands that it will react to. The HomePod is also largely restricted to Apple services. For example, the Homepod will only respond to voice commands to play music through Apple Music. If you’re a Spotify user, you won’t be able to access your playlists by voice commands — you’ll have to connect via Bluetooth or AirPlay. The HomePod also doesn’t support any third-party skills, so its functionality is seriously limited compared to Amazon’s and Google’s smart speakers.

What can I do with an Amazon Echo?

Earplay — A unique skill that really shows off Alexa’s capabilities, Earplay tells immersive stories that you can respond to and interact with, like a choose-your-own-adventure book.

Jeopardy! — The world’s most popular trivia game is also one of the most popular games on Alexa. Jeopardy! on Alexa is the same game you know from television, with countless categories and new clues every day.

The Bartender — Sure to be a favorite of many a frat star, The Bartender turns anyone into an amateur mixologist. Ask the bartender how to make your drink of choice and it will respond with a recipe. If you don’t know what you want, you can search based on type of liquor or even ask for a random drink recipe.

Big Sky — The best weather skill for Alexa, Big Sky uses the Dark Sky API to give you super-local hour-by-hour forecasts based on your street address.

Find My Phone — The Find My Phone skill will call your phone, so that you can find it easily if you misplaced it. Once you add your phone number, all you need to say is, “Alexa, find my phone,” and it will do the rest for you.

Uber and Lyft — Two different skills that serve the same function, Uber and Lyft allow you to call a car using Alexa. A super-convenient skill for those living in urban areas or areas with little public transportation.

Domino’s — Order a pizza with minimal effort. All you have to do is ask Alexa to open Dominos and place an order. You can even track your order as you wait.

As far as we’re concerned, students looking for an Amazon Echo should just go with the cheapest option. The Echo Dot can do anything that the standard Echo can do. The only differences are size, cost, and sound quality. We actually count the smaller size as a plus for students, as it makes it more portable. The smaller and cheaper Dot has a worse speaker than the Echo does. But the speaker in the Echo, as well as the even-more-expensive Echo Plus, isn’t anything to write home about, anyway. If you’re looking for great sound quality, I recommend buying a bluetooth speaker (check out our list of the best bluetooth speakers for college students). You can pair your Echo Dot to a speaker via bluetooth or a standard 3.5 millimeter stereo jack and get better sound quality than you would with the Echo. Beyond sound quality, there isn’t really any substantial difference in performance between the Echo and the Echo Dot.

If you want a smart speaker with a visual interface, go with the Echo Spot. The Echo Spot is the smaller budget version of the Echo Show, which has a rectangular 7-inch screen that is primarily designed for video chatting. The Echo Spot’s round 2.5-inch screen is admittedly very small. It’s pretty useless for watching videos. But it’s okay for video calls. The video is crisp and the sound quality is clear. A smaller screen means it underperforms the Echo Show in this department, but it costs $100 less. The size and design of the Echo Spot make it a good alternative to an alarm clock — the display can be set to show the weather, news, the time, album artwork, and song titles.

A few third-party manufacturers have teamed up with Amazon to create speakers with Alexa integrated into them. Our favorite for college students is the Ultimate Ears Megablast. Ultimate Ears is a popular portable speaker company known for producing durable, high-quality speakers. The powerful Megablast is no exception. The Megablast and the smaller Blast both have an IP67 waterproof rating, meaning that they can survive for a half hour under a meter of water (though I wouldn’t recommend testing that). The Megablast is more expensive and has better sound quality than the Blast, though both have better sound than the entire Echo line. The Megablast is a phenomenal, bassy speaker, with sound quality comparable to speakers from industry leaders like Bose. Both are equipped with WiFi connectivity and a slightly limited version of Alexa. You won’t be able to make voice calls on the UE Megablast, but you will be able to use a number of music services, including Spotify, Amazon Music, Pandora, and others.