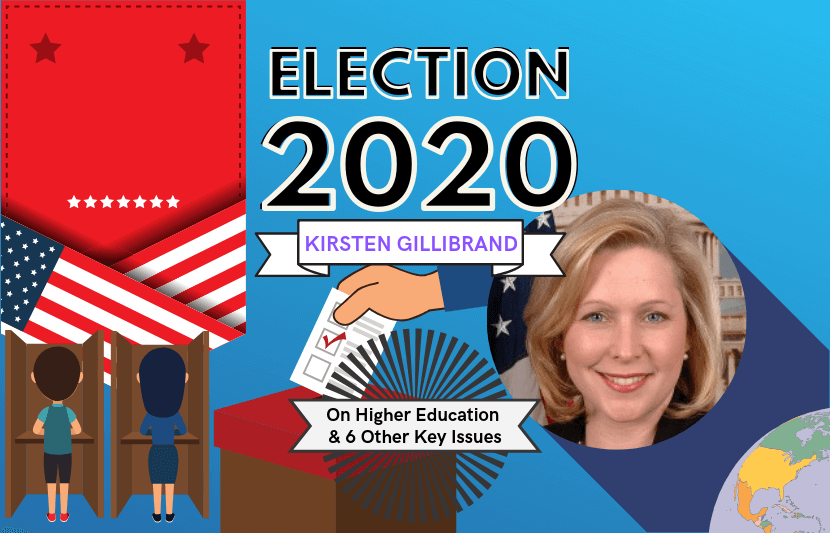 Kirsten Gillibrand (D-N.Y.) was born and raised in upstate New York. As the daughter of two attorneys, law and politics are practically in her blood. Before replacing Hillary Clinton’s U.S. Senate seat in New York in 2009, she worked as an attorney and as a member of the U.S. House of Representatives. Fittingly, she was a leader in the fight to grant permanent health care to the 9/11 first responders whose health was impacted by the dangerous toxins at Ground Zero. As a member of the Senate, she worked with Democrats and Republicans to address sexual assault in the military and on college campuses. Currently, she sits on the far-left side of the political spectrum, but that wasn’t always the case. She has significantly switched her opinions on, primarily, immigration and gun control. In 2010, she went from having an A rating from the National Rifle Association (NRA) to an F.

Here is what Kirsten Gillibrand stands for:

Gillibrand joins Sen. Cory Booker (D-N.J.), Sen. Elizabeth Warren (D-Mass.), Sen. Kamala Harris (D-Calif.) and others in support of the Debt Free College Act, which would make the entire cost of college free, including housing, books and other expenses.

But before college is made free for future generations, Gillibrand wants to help those who are swamped in student debt.

Recently she tweeted: “Our current system of federal student loans makes no sense: Stopping graduates from buying homes or starting businesses is a drag on the whole economy. We need to let existing debt be refinanced to a lower rate like any other, then make debt-free college a reality for everyone.”

Gillibrand believes community college should be free. She has signed her support of the America’s College Promise Act, which would make two years of community college free. The Act proposed that the federal government would invest $3 for every $1 a state invests towards community college tuition for students. It also ensures that community colleges offer academic credits that can easily be transferred to a four-year state college or university.

Eliminating student debt is one of Gillibrand’s priorities. She introduced the Federal Student Loan Refinancing Act, which would allow students to refinance their loans from 6.8 percent — what they are paying now — to 4 percent.

“Student debt is at a crisis level in this country, and it holds our whole economy down,” she tweeted. “One of the first things I’d do as president is [to] allow all students to refinance their loans at 4%. The federal government shouldn’t be making money off the backs of our students, period.”

Gillibrand has been outspoken about campus sexual assault and dismisses the U.S. Secretary of Education Betsy Devos’ proposed changes to Title IX that would, among other things, “require schools to apply basic due process protections for students, including a presumption of innocence throughout the grievance process.”

She recently tweeted: “When someone reports sexual assault or harassment, as a first step, we must listen and believe them so all allegations can be investigated fairly and properly. But @BetsyDeVosED’s draft rules on Title IX weaken protections for survivors and discourage reports of abuse in schools.”

Gillibrand sees the need to shrink the wage gap and address income inequality. But in a race where some of her competitors have suggested significant taxes on Wall Street and the super-rich, Gillibrand has primarily voiced her support of paid leave, a $15 minimum wage and equal pay for women.

“We have to stop this notion that we want someone to work 40 hours a week and still live in poverty. That is not the American Dream, and that is not who we are as Americans,” Gillibrand said in a 2015 interview with CNN. “If someone is working 40 hours a week and can’t find their way to the middle class, because they aren’t learning a living wage, it’s a huge problem.”

Although Gillibrand is best-known for being an advocate for women, she also has a history of supporting the LGBT community. As a member of Congress, Gillibrand voted in favor of the Sexual Orientation Employment Nondiscrimination Act, the Local Law Enforcement Hate Crimes Prevention Act and the Don’t Ask, Don’t Tell Repeal Act, among other bills.

And in a 2019 tweet, Gillibrand voiced her support of the Equality Act, stating: “It’s hard to believe that in 2019, in more than half of states, LGBTQ Americans have no legal protections against discrimination. It’s long past time for us to pass the #EqualityAct.”

Gillibrand recognizes the need to reform the criminal justice system. In December 2018, she voted in favor of the First Step Act, which encourages incarcerated people to join rehabilitation programs and engage in “productive activities” by incentivizing them with an opportunity for an earlier release date.

And after Paul Manafort was sentenced, she pointed out the racism and inequities in the U.S. criminal justice system, tweeting: “Until we confront the glaring racial and economic disparities in our criminal justice system, people like Manafort get to act above the law while low-income people and people of color sit in jail for far less serious charges. If this feels like an outrage, that’s because it is.”

3. Kirsten Gillibrand on the Environment

Gillibrand is a staunch believer in climate change, and she backs renewable energy solutions to mitigate the issue. In 2018, she helped sponsor the Climate Risk Disclosure Act of 2018, which would require public companies to disclose their greenhouse gas emissions, fossil fuel holdings and more. She has also voiced her support of the Paris Agreement and the Green New Deal.

In December of 2018, she tweeted: “To take on the impacts of climate change, we need to take bold action. We need to rein in corporate polluters and Big Oil. We need to invest in technological innovations and renewable energy. We need to finally pass the reforms that will protect our planet.”

Gillibrand’s support of the Green New Deal signifies her desire to shift the United States towards renewable energy in order to mitigate climate change.

Gillibrand has changed her views on immigration. In 2007, while Gillibrand was a member of the House of Representatives, she co-sponsored the SAVE Act, which aimed to add 8,000 border patrol agents, force companies to check the legal status of their workers, make deporting undocumented immigrants simpler and quicker, and employ an additional 1,150 Immigrations and Customs Enforcement (ICE) agents.

But she has since changed her views altogether, telling the New York Times that “it’s a case of learning more and expanding my view.”

In 2010, she was a co-sponsor of the Dream Act, which, in some cases, would grant U.S citizenship to illegal immigrant minors. And in 2018, Gillibrand became the first U.S. senator to announce that she was in favor of abolishing ICE. More recently, she voted to block President Trump’s national emergency that would have allowed him to build his border wall.

Like many of her Democratic competitors, Gillibrand supports the federal legalization of marijuana. Recently, she announced she was co-sponsoring the Marijuana Justice Act, which would legalize marijuana across the United States, expunge the records of those who served time, and reinvest in the communities that have been heavily impacted by strict marijuana laws.

“Millions of Americans’ lives have been devastated because of our broken marijuana policies, especially in communities of color and low-income communities,” Gillibrand said in a statement. “Just one minor possession conviction could take away a lifetime of opportunities for jobs, education, and housing, tear families apart, and make people more vulnerable to serving time in jail or prison down the road. The reality that my 14-year-old son would likely be treated very differently from one of his Black or Latino peers if he was caught with marijuana is shameful.”

Gillibrand believes in the Second Amendment, but she does call for regulations and background checks. Specifically, Gillibrand is against national concealed carry, supports universal background checks on the sale of every firearm, and has introduced legislation to minimize firearm trafficking.

Recently, Gillibrand tweeted: “Tens of thousands of Americans are killed with guns every year. Many are kids. There’s no excuse for the NRA’s chokehold on our laws; even gun owners want background checks.”

Like many of her Democratic competitors, Gillibrand is a supporter of net neutrality, as she believes everyone should have access to a free and open internet where they can express their ideas, opinions and creations.

After the Federal Communications Commission (FCC) voted to repeal Obama-era net neutrality laws, Gillibrand said: “The FCC just voted to give the biggest corporations much more control over what people see on the Internet. This was a shameful decision, and now that it has gone through, the biggest service providers could be able to decide which sites are fast and which sites are slow with little oversight.”