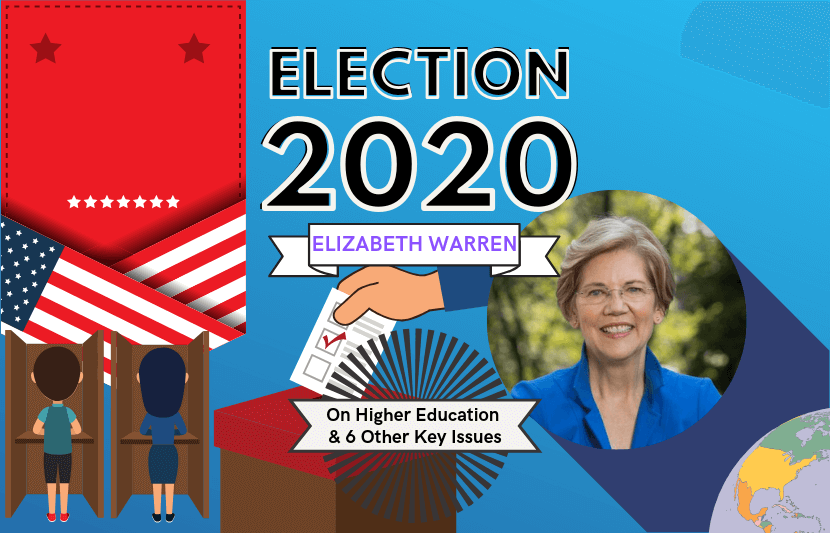 As an Oklahoma native with middle-class roots, Sen. Elizabeth Warren (D-Mass.) has dedicated her political career to, primarily, protecting what she calls “America’s promise” — the promise that anyone who works hard and does what they are supposed to should be able to support themselves and the ones they love. But Warren hasn’t always been a politician. She spent the majority of her days teaching law at Harvard and other prestigious universities. It wasn’t until “America’s promise” was threatened by the 2008 economic crash that she entered the political sphere.

“After Wall Street crashed our economy in 2008, I left the classroom and went to Washington to confront the broken system head-on,” Warren said in a video signalling her launch of an exploratory committee for president. “I never thought I would run for office — not in a million years. But when Republican senators tried to sabotage the reforms and run me out of town, I went back to Massachusetts and ran against one of them. And I beat him.”

Here is what Elizabeth Warren stands for:

Like many of the 2020 Democratic candidates, Warren has continuously vocalized her support for free college. In 2017, she supported Sen. Bernie Sanders’ (D-Vt.) College For All Act, which would make public colleges and universities tuition-free by imparting a small tax on Wall Street’s speculative financial trades.

More recently, she proposed the Universal Free College Program, which would eliminate the cost of college by implementing a 2 percent annual tax on the 75,000 richest families in the United States. Her campaign estimates the tax would bring in $2.75 trillion over 10 years.

In a passage on her website, Warren writes: “As I travel all across the Commonwealth [Massachusetts], I meet young people who have done everything right: they played by the rules, they worked hard, they finished college, and yet they’re finding themselves unemployed, drowning in debt, and in many cases, moving back home with mom and dad. These young people did all we asked of them — and they’re getting slammed.”

Warren publicized her commitment to making community college free and accessible for anyone when she supported Bernie Sanders’ College For All Act. She has also vocalized her support for improving high school to community college pipelines, which she believes could help close the educational achievement gap.

Warren has pledged to eliminate up to $50,000 of student loan debt for 95 percent of borrowers on the very first day of her presidency. She could do this, she claims, because she wouldn’t need approval from Congress.

In a blog post, Warren explained she would cut the debt using the legal authority granted through the Higher Education Act, which gives the Department of Education the power to “modify, compromise, waive, or release student loans.”

The Department of Education, she wrote, “already has broad legal authority to cancel student debt, and we can’t afford to wait for Congress to act. So I will start to use existing laws on day one of my presidency to implement my student loan debt cancellation plan that offers relief to 42 million Americans.”

Warren has made it clear that closing the income gap between the rich and the poor is her main priority. She believes that reducing income inequality is essential to upholding “America’s promise.”

“I’ve spent my career getting to the bottom of why America’s promise works for some families, but others who work just as hard slip through the cracks into disaster,” Warren said in a video. “What I’ve found is terrifying. These aren’t cracks that families are falling into, they are traps. America’s middle class is under attack. How did we get here? Billionaires and big corporations decided they wanted more of the pie and they enlisted politicians to cut them a fatter slice.”

Warren has stayed consistent in promoting equality for LGBT people. In 2015, she worked with Senate Democrats to help get rid of the lifetime ban on gay and bi-sexual men donating blood. And in 2019, she signed her support of the newest version of the historic Equality Act, which would ban discrimination against LGBT people in education, employment, housing, credit, public accommodations, federally funded institutions, and federal jury service.

“No one should be discriminated against because of race, color, national origin, sex, disability, sexual orientation, gender identity or expression, or religion,” Warren states in a passage on her website. “We are a people who believe in equal opportunities, and discrimination on such grounds undermines our most basic values.”

While criminal justice will likely not be the key talking point of Warren’s 2020 campaign, she believes that the system is “racist” and is in need of reform.

Recently, she helped pass the bipartisan First Step Act into law. The Act encourages incarcerated people to join rehabilitation programs and engage in “productive activities” by incentivizing them with an opportunity for an earlier release date. However, Warren believes the Act doesn’t go far enough.

“We need criminal justice reform and we need it now,” she opines on her website. “That means ending racial disparities in our justice system. It means banning private prisons. It means embracing community policing and demilitarizing our local police forces.”

3. Elizabeth Warren on the Environment

Warren is a staunch supporter of the fight against climate change. She recently proposed a plan to invest $2 trillion in creating a green manufacturing sector, so the United States can advance production of American-made clean energy technology.

In 2015, she, along with four other Senate Democrats, sent a letter to U.S. governors encouraging them to comply with then-President Obama’s Clean Power Plan.

And after Trump withdrew from the Paris Agreement in 2017, she called him out by referring to his action as a “big gift to Republican donors.”

“In this democracy, government can be seized by a handful of people with money who can get government to tilt in their direction,” she said, according to the San Francisco Chronicle. “Money slithers through Washington like a snake.”

“Climate change is a real and present danger — and it will have an enormous effect on the value of company assets,” Warren said in a statement. “Investors need more information about climate-related risks so they can make the right decisions with their money. Climate change can be an economic opportunity if we act boldly and decisively. But if we don’t, we will see a global catastrophe that will put the 2008 crisis to shame. Our bill will use market forces to speed up the transition from fossil fuels to cleaner energy — reducing the odds of an environmental and financial disaster without spending a dime of taxpayer money.”

Warren encourages the transition to clean energy, as she sees both economic and environmental benefits. In 2016, she voiced her support of a resolution that encouraged the United States to work towards operating on entirely clean, renewable energy by 2050 — a plan that also was projected to create thousands of jobs.

But she now believes 2050 may be too late. She hopes her recent proposal to create a green manufacturing sector would speed up the process.

“We need to invest in clean energy, lead the fight on climate change, and stop giving tax breaks to Big Oil,” she wrote in a recent Facebook post. She also voiced her opinion that coal lobbyists don’t have a place in the Environmental Protection Agency (EPA).

Along with many of Warren’s competitors for the 2020 Democtratic nomination, she stands against the idea of building a wall to keep Mexican immigrants from entering the United States illegally. Warren is also a supporter of the Dream Act, which would protect young undocumented immigrants from deportation, allow them to work in the United States and travel in and outside of the country.

Warren believes in the legalization of marijuana for both recreational and medical purposes. In 2018, she introduced the STATES Act, which would put an end to the federal ban on marijuana and allow states to decide whether to legalize it or not.

She has also voiced her support of Cory Booker’s Marijuana Justice Act, which would legalize marijuana across the United States, expunge the records of those who served time, and reinvest in the communities that have been heavily impacted by strict marijuana laws.

No specific gun control plan is outlined on Warren’s website, but her history suggests that she supports universal background checks, gun licensing, and a ban on assault weapons, bump stocks, and high-capacity magazines.

After the shooting at Stoneman Douglas High School in Parkland, Florida, Warren sent a letter to nine gun company investors warning them of the potential consequences of their decisions.

“Your company is in a powerful position,” she wrote in the letter. “You have reaped significant benefits from your investment in gun manufacturers, but have done little to reduce the violence and murders caused by their products. I encourage you [to] take action to ensure that the gun companies in which you invest are taking steps to reduce gun violence.”

Warren was a crusader in the fight for a free and open internet. In 2014, she, along with 10 other senators, wrote a letter to the Federal Communications Commission (FCC) requesting the agency’s dismissal of the proposal by its then-Chairman Tom Wheeler to create “internet fast lanes.”

Warren has remained consistent in her opinion. In 2018, she voted to overturn the FCC’s decision to dismiss net neutrality rules, in hopes that the internet would stay open.