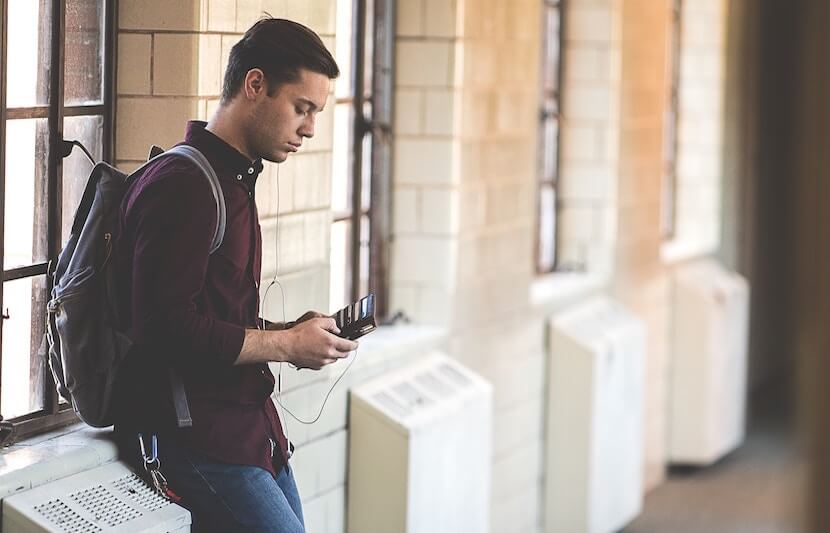 When envisioning the typical college student, people may see a 20-year-old fumbling books while walking through a library, or maybe — if they have seen the movie “Animal House” too many times — they think of partygoers decked out in togas.

But in reality, college students today are very different from those outdated stereotypes, and they come from a wide range of economic, social and cultural backgrounds.

So, who are they?

1. They are older than you think

The majority (55 percent) of students are still under 21 years old, but the Hollywood depiction of a college student — where they enroll directly after high school, live in dorms and take a full course load — doesn’t apply for everyone.

Largely, student bodies are becoming much older, and many students have responsibilities outside of the classroom. In fact, 41 percent of today’s college students are over 25 years old, and 26 percent have children.

2. A majority of them work and are financially independent

At 55 percent, the majority of students are already financially independent, but nearly half of them live at or below the poverty line.

Primarily, individuals attend college so they can earn a higher-paying job. But to pay for living costs and tuition while working towards their degree, 58 percent of students are sacrificing study time to work jobs. On top of their course load, students with jobs spend an average of 19 hours a week at work.

With all of these responsibilities, there is little time for sleep. Students are only sleeping an average of 6-6.9 hours a night.

3. They have a lot to worry about

There is no question that mental health issues are widespread at colleges and universities.

Members of Generation Z — who make up the bulk of “traditional” students — report having worse stress than any other generation.

And in a study involving more than 67,000 college students from across more than 100 institutions, researchers from Brigham and Women’s Hospital found high rates of stressful life events, mental health diagnoses, and the risk of suicide or suicidal thoughts among all students surveyed.

Largely, today’s college students are concerned about their financial security, the state of the nation, climate change, and their peers, among other things.

College students, today, are paying more for their education than any generation of students before them. Increasingly high tuition costs are forcing students and their parents to take out high-interest-rate loans that can take decades to pay off.

In fact, 70 percent of students have to take out loans to pay for their college education, and by the time they graduate, each borrower racks up an average debt of $37,172.

Leaving college with that much debt hinders many young graduates’ ability to buy a home, start a business, be an active consumer, and even move out from their parents’ house.

With the rise of automation and the declining value of a bachelor’s degree, finding a job after graduation is not as easy as it once was. Largely, the job market is oversaturated with qualified employees who are often competing for the same positions.

As a result, 40 percent of college graduates have to take jobs after school that don’t require a degree.

And those who choose to stay in the field they majored in often have to make money by seeking out freelance opportunities, which can create additional stress.

And even those who are able to earn a full-time job after graduation likely won’t receive as high of a starting salary as their parents did when they left college.

The lack of positive news is disconcerting for everyone, but for young college students, each negative story is a reminder of the future they face.

Consequently, this has driven many people to be more politically active.

“Part of what causes the heightened level of stress is the level of uncertainty about what’s happening in the world,” Wright said.

“The challenge with uncertainty is that it reminds us of all the things that are out of our control,” she continued. “So, when we do contribute in ways to our community, whether that’s taking active steps to vote, volunteering in community-level organizations or participating in protests, those are really active steps that people can take to manage their stress.”

Boomers and Gen Xers have largely failed to mitigate climate change, so it falls on the younger generations to make an impact that will preserve the earth for years to come.

And, in stride, students and higher education institutions have taken it upon themselves to lead the way.

Colleges and universities all around the United States have ramped up sustainability efforts, by way of recycling initiatives, sustainable farming, and transitioning to renewable energy, among other things.

But a lot of the time, it’s students who start the ball rolling.

Take Leah Johnson, a former biochemistry and environmental studies major at UW–Madison, for example. While she was in college, she co-founded her own organization that advocates for renewable energy on campus, campaigned for a three-credit environmental course required for all incoming students, and helped draft UW’s carbon neutrality goal.

Thirty-six percent of college students have faced some kind of homelessness, 9 percent live completely without a home, and 48 percent experience food insecurity.

These issues are commonly under-reported to the public. But students, on the other hand, are often aware of the troubles experienced by many of their peers.

As a result, student- and university-run campus groups have sprouted up to help.

Here are just a couple of examples.

To combat campus homelessness, a UCLA student group opened the Bruin Shelter, which provides students with a bed to sleep in, toiletries, dinner and a bagged breakfast.

To help feed their hungry students, many colleges and universities have opened up campus food pantries in which students can pick up the necessities to prepare healthy meals. The University of California Irvine took it a step further and opened up a new type of food pantry called the FRESH Basic Needs Hub. The 2,318-square-foot space also serves as a place for students to learn how to prepare their meals.

4. They are quitting social media

A recent study conducted by the Pew Research Center found that 44 percent of 18- to 29-year-olds have recently deleted Facebook from their cell phones. And further evidence suggests they are quitting social media altogether.

But, privacy is also a big concern for this age group. In fact, 64 percent of 18- to 29-year-old users claim to have recently adjusted their Facebook privacy settings.

5. They prefer experiences over things

Although 40 percent of college students are over the age of 25, only 8 percent are over 40 years  old. Therefore, the vast majority of students are either millennials or Gen Zers.

And, generally, these two age groups enjoy spending whatever extra money they have on experiences — things like travel, food and social gatherings — rather than physical objects.

In fact, 78 percent of millennials said they would rather spend money on a memorable event than a desirable purchase.

Traveling is not always cheap, and while students are enrolled in college, it isn’t always an option. But that doesn’t hinder their passion for it.

Overall, millennials and Gen Zers are spending more time traveling than their parents and grandparents. And, in recent years, more and more American students are deciding to study abroad.

Food insecurity is a huge issue on college campuses, as mentioned above, and many students are forced to make difficult decisions between, say, buying a textbook or going to the grocery store.

However, students who do have money are spending a significant portion of it on going out to eat or ordering their meals through food delivery services, such as Uber Eats, Postmates and DoorDash.

In fact, a study found that a majority of students would choose to put their spending money towards food, over long-lasting items like clothes or electronics.

Millennials are famous for seeking out social gatherings. They attend parties, festivals, concerts and other live experiences at higher rates than other generations.

Gen Zers, on the other hand, love food and traveling, but when it comes to social gatherings, they tend to be more frugal. Some once-popular social gatherings, such as Ohio University’s “#’s Fest,” are now struggling with student attendance rates.

While college students today are very different from the stereotypes of the past, the one thing they do have in common is the bond they form as students while pursuing their educational interests. The things they see, experience and learn while working towards their degree still brings them together the way it did decades ago.