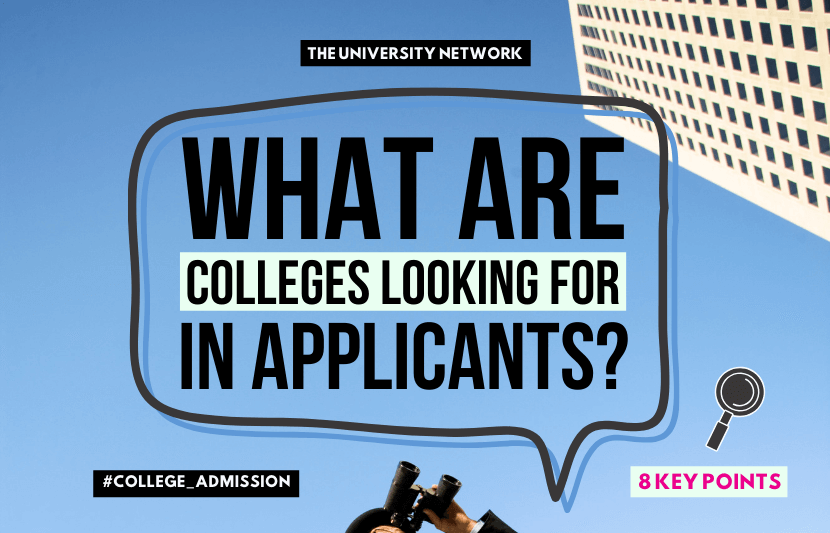 For aspiring college-goers, few things are more stressful than the college application process.

From a young age, students are pressured to maintain a good grade point average (GPA), earn high test scores and still fit in time for extracurriculars — so, one day, they can experience the relief of opening a college acceptance letter.

But, getting into college is a competitive and difficult process. And a lot of the time, it is beyond an applicant’s control.

Even those with nearly perfect credentials could be turned away by a college or university if they don’t fit the school’s admissions needs for the year. See, colleges and universities don’t always admit the students with the best test scores or grades. They also have a responsibility to consider applicants’ personalities and the overall diversity of a school.

So, unfortunately, there is no silver bullet for getting into college.

But, after speaking with experts and evaluating admissions criteria from multiple public, private and Ivy League colleges and universities, The University Network (TUN) was able to assemble some advice to help applicants stand out from the crowd and get into their dream school.

Here are the key points students should pay attention to.

Colleges aren’t seeking out students who are content with where they are. Instead, colleges want to admit students who show a desire to grow.

Students can demonstrate their ambition to college admissions departments by taking challenging courses and working hard to excel in them.

“If a student is looking to apply to fairly selective to very selective colleges and has all As, that’s great. But if they are not challenging themselves with honors classes or APs, that’s going to be a mark against them,” said Joe Korfmacher, a director of counseling at Collegewise, the nation’s largest college counseling organization.

This advice holds true across various colleges and universities.

The University of Georgia (UGA) has this advice on its admissions website: “To be most competitive, you should challenge yourself by pursuing the most rigorous courses available in your high school that you, your parents, and your guidance counselor deem appropriate to your level of ability.”

And Washington and Lee University, a private school with an enrollment of close to 2,000 students, looks for similar traits in applicants.

Its admissions website states: “The most important part of your application is your daily record — what courses you have taken and how well you have done in them. We are looking for students who have a superior record of achievement in the most challenging curriculum available to them. This does not necessarily mean that you should take every AP class your school offers, but it does mean that you should push yourself in every subject.”

Not every student is suited to take honors and AP courses early in their high school career, and some may even hit a few bumps early on. But that is OKAY.

When reviewing applications, admissions counselors may consider, “If a student started high school kind of rough, did they show improvement?,” Cassell said.

High schools vary in difficulty, so it isn’t fair for college and university admissions departments to evaluate students solely on their GPA.

So, college admissions officers also have a responsibility to develop an understanding of the difficulty of the high school that each applicant attends, Korfmacher suggested. From there, they can measure applicants in terms of how well they performed compared to their peers.

Generally, high schools rank their students based on their “weighted GPA,” which is a formulaic measurement that combines letter grades with course difficulty.

Prominent public colleges, such as the Ohio State University, typically admit students who graduate in the top 25 percent of their high school class. And Ivy League schools, such as Dartmouth, generally admit applicants who are in their graduating class’s top 4 percent.

4. Focus on letter grades, not GPA

For many college admissions departments, the grades students receive in their high school courses are still the most important factor of a college application.

But students shouldn’t get hung up specifically on their GPA, Korfmacher suggested.

When college admissions officers are evaluating an applicant, they look at his or her entire transcript, which includes every letter grade received from freshman to senior year of high school. And if admissions officers want to consolidate grades, they generally do it using their own unique formula.

So instead of concentrating on GPA, students should focus on their letter grades and, more specifically, getting all As and Bs.

Yes, SAT and ACT test scores definitely still do matter, but not as much as you think.

“It’s something that is standardized, so it is easy for schools to read, and it helps them develop their incoming class,” Korfmacher said.

However, some schools rely less on test scores than students may assume.

UGA, for example, writes this note to its applicants: “A high score on the SAT or ACT will not compensate for a non-competitive GPA. Your record of three to three-and-a-half years’ worth of rigorous academic work in the classroom will be the primary focus of any admission decision.”

And Washington and Lee has this to say: “Although we do not put undue weight on test scores, they are an important tool that helps us distinguish between similarly qualified applicants. We realize they reflect your performance on one Saturday morning, and we want to give you every benefit of the doubt.”

Some colleges and universities have even decided to become “test optional” and no longer require applicants to take the SAT or ACT. Such schools include Bates College, Bowdoin College, George Washington University, Hofstra University, University of New Hampshire, and others.

6. Gain edge with extracurriculars, leadership roles and letters of recommendation

Extracurriculars, leadership roles and letters of recommendation certainly can’t supplement a poor GPA or SAT score. However, when applying for a position at a competitive college or university, they can set applicants apart.

“Some big colleges will have so many applications to review that all they might be looking for during the application review is the transcript and test scores,” Cassell said. “But other colleges tend to look at a variety of other factors — certainly (students’) leadership outside of the classroom, their involvement and letters of recommendation.”

And in regards to such activities, schools generally like to see that applicants have shown consistency and fully enjoy what they are doing.

While not every admissions department has the time to evaluate students based on their level of interest in attending, some smaller, competitive schools take it into consideration.

Although this may seem surprising, universities are like communities. They want members who are excited about joining and who are eager to get involved.

8. Let your personality shine through

As hard as it may be to believe, even public colleges with huge enrollments take the personality of their applicants into consideration.

“There are a lot of students that don’t show great on the application, but maybe in the essay piece or the interview, they will come off as a nice person,” said Korfmacher. “Admissions counselors are responsible with bringing, basically, outsiders into their community. So, they want people that are going to fit in well and be liked.”

Collegewise has come up with an acronym that sums up the personality traits that college admissions officers are looking for in applicants. The acronym — PIILL — stands for passion, initiative, individuality, likability and love of learning.

Love of learning is huge, according to Korfmacher.

“There are a lot of students that have the grades and scores, but they can’t really show that they truly love learning,” he said.

Students can express their love of learning through their essay and their interview and by taking courses that push them academically, such as AP and honors classes.

Will the recent admissions scandal affect how colleges analyze applicants?

For years, students have followed these preceding guidelines to get into their choice college or university. But some worry that the recent college admissions scandal may forever change how schools consider applicants.

Certainly, the scandal, in which parents illegally slipped their children into spots at prestigious universities by bribing coaches, administration and others, has shaken the college admissions world.

But ultimately, Korfmacher doesn’t believe it will greatly impact what colleges and universities are looking for in applicants.

“I think that some admissions offices are going to have to do a bit of housecleaning and make sure that this is a fair process for all,” Korfmacher said. “They are still going to be looking for the same elements in applications, but they just need to make sure that everyone has a fair shot.”

Currently, Stanford, Yale and other universities wrapped up in the admissions scandal are conducting their own investigations and developing ways to eliminate vulnerabilities in their admissions processes.

And other universities that were not involved with the scandal, including Southern Methodist University are taking precautionary steps and reviewing the admissions records of currently enrolled students to make sure everyone enrolled was admitted fairly.