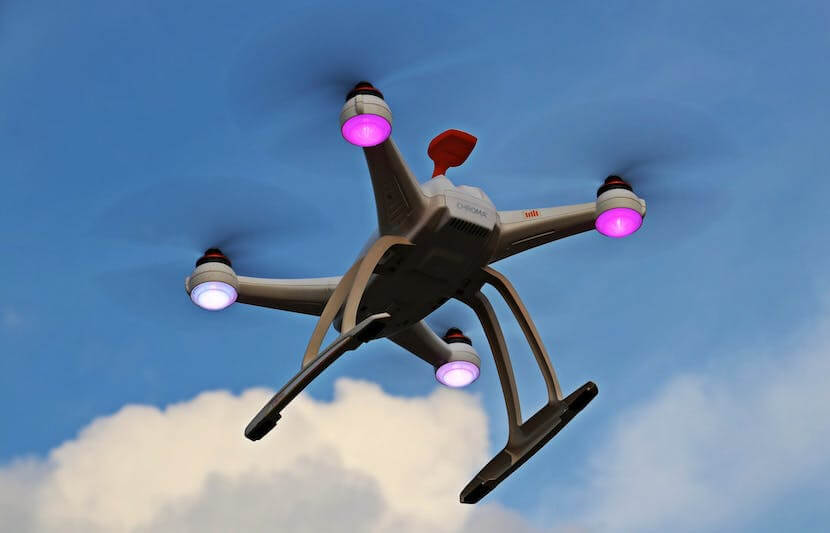 Robots have long been imagined in science fiction novels and films, but current technology shows that such machines are no longer a point of fantasy.

Each day, great strides are made to further develop diverse, intelligent and multi-capable robots, and often, women are at the forefront of such work.

In this article, we highlight five women who are “killin it” within the field of robotics.

Robots are helping humans in classrooms, factories and even operating rooms — and Sheila Russo’s latest work with soft robotics is an example of just that.

Russo worked with a team from Harvard’s Wyss Institute for Biologically Inspired Engineering, Harvard John A. Paulson School of Engineering and Applied Sciences (SEAS) and Boston University to develop a new method to fabricate soft millimeter-scale materials, paving the way for flexible microrobots to be used in medical procedures and other hard-to-access environments.

Russo helped start the project as a postdoctoral fellow at the Wyss Institute and SEAS.

Soft robots, whose inside and outside are both made of soft materials, promises more flexibility working around changing or unstructured environments, in a manner that could not be achieved by the traditional, rigid robots.

To demonstrate their new technology, Russo and her team created a robotic soft spider using a new fabrication process to design millimeter-scale robots with multiple functions. 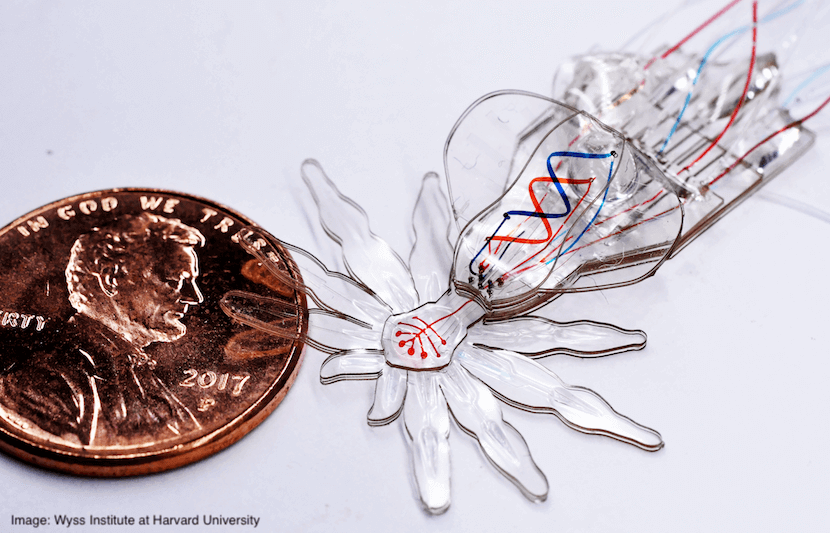 The researchers believe this new process will allow soft robots to explore highly unstructured and complex environments for multiple applications, ranging from safe and delicate manipulation of tissues inside the human body to searching and rescuing in dangerous areas.

“The smallest soft robotic systems still tend to be very simple, with usually only one degree of freedom, which means that they can only actuate one particular change in shape or type of movement,” Russo said in a statement.

“By developing a new hybrid technology that merges three different fabrication techniques, we created a soft robotic spider made only of silicone rubber with 18 degrees of freedom, encompassing changes in structure, motion, and color, and with tiny features in the micrometer range.”

As a professor of electrical engineering and computer science, and director of CSAIL at MIT, Daniela Rus has worked on a plethora of projects in robotics, mobile computing and data science.

Among those projects, Rus has created a robot capable of altering its appearance and abilities by changing exoskeletons. Known as “Primer,” this robot design is a departure from traditional thinking in which robots are built to perform one task or suit one particular purpose.

Instead, Primer has the ability to adopt the form best suited to a given task.

After seeing inflexibility as a hindrance to the field of robotics, Rus and her team wanted to develop a robot that can perform a number of functions without traditional setbacks.

“Robots – and especially rigid-bodied robots, like the kinds you see in movies – are generally pretty inflexible, since most of the time each of their parts has a fixed structure and a single defined purpose,” said Shuhei Miyashita, a former CSAIL postdoctoral research associate who is now a lecturer in intelligent robotics at the University of York in the UK.

“This means that they can’t easily be developed to achieve different types of tasks.”

Without any exoskeletons, Primer has the appearance of a gold sugar cube. By donning its various exoskeletons, it can walk, roll, sail and glide.

Its movement is controlled via magnets, and its exoskeletons come in the form of sheets of plastic which, when heated, fold up around Primer. Once the task is accomplished, Primer sheds it exoskeleton by immersing itself in water. 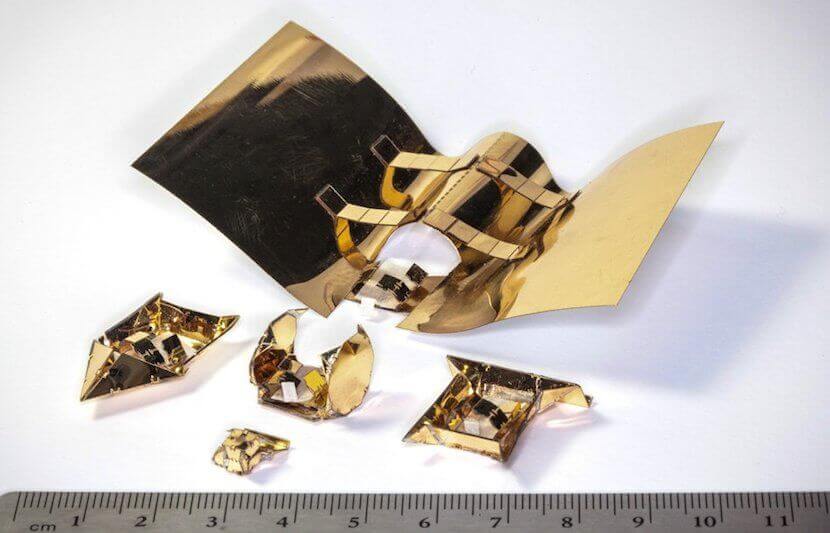 Image: Courtesy of the MIT researchers

“Our approach shows that origami-inspired manufacturing allows us to have robotic components that are versatile, accessible, and reusable,” said Rus in a statement.

The researchers propose that this work could be used for a number of applications — from drug delivery within the body, to future vehicle designs.

Autonomous flight in robotic vehicles without the use of GPS technology is becoming a reality, thanks to the work of Mozhdeh Shahbazi and her recent drone technology.

Shahbazi has spent her academic and professional career advancing fine-scale 3D-mapping and modeling technology. To her, unmanned aerial vehicles (UAVs) serve as a “platform to improve mapping and navigation purposes.”

But until recently, UAVs have relied on GPS technology to guide them through the air.

This is a problem because, when the flying machines reach urban areas, skyscrapers and other urban infrastructures cut off the GPS signal. In rural areas, trees do the same.

Shahbazi recognized these faults of past autonomous flight, but saw potential in the idea.

“Autonomous UAVs or other types of unmanned systems (robots) can be extensively applicable as geospatial tools if we teach them properly how to interact with the environment around them for safely navigating themselves and, also, for fulfilling the mapping missions that we give them,” she told TUN.

“The geomatics applications of these solutions, which I am interested in, include infrastructure inspection, on-demand emergency mapping, city modeling, wildlife management, and precision farming.”

In order to work toward a better system, she plans on “implementing vision-based techniques of precise navigation”, creating a “task-based active view planning for autonomous image acquisition,” and developing “semantic stereo-vision computation for automated and accurate 3D mapping of infrastructure.”

This means her new 3D technology should be able to “see” the urban infrastructures, such as buildings, telecommunication towers, power lines, and roads, to gauge its location.

“It uses this information to determine both its current position and its next move, which should be concerned with not only reaching the desired destination safely but also accomplishing the task it’s been given.”

Though she has not yet tested her technology in the field, she has been collaborating with Augmented Urban Space Modeling Lab at York University, under the supervision of Gunho Sohn, an associate professor of geomatics engineering at York University.

Alongside other researchers at Stanford University and UC Santa Barbara, Allison Okamura developed a “soft” robot that can extend its tip and change direction without moving the body.

Because it would be able to maneuver well in tight or constrained spaces, such a robot could be used to clear blockages in arteries or tunnel through debris in search and rescue operations.

The inspiration came from natural organisms that cover distance by growing from their tips, such as climbing vines, fungi and nerve cells.

“Essentially, we’re trying to understand the fundamentals of this new approach to getting mobility or movement out of a mechanism,” Okamura said in a statement.

“It’s very, very different from the way that animals or people get around the world.”

The robot is equipped with small pneumatic control chambers and a camera on the tip, which is held in place by a cable that runs through its body and gives visual feedback of the environment. The soft robot grows due to pneumatic pressure from within it, like an inflating balloon, which allows it to transport the things inside it.

What’s different in the case of the soft robot, in contrast to a balloon, is that the pressure leads only to the tip unfurling. Because the body of the robot itself does not expand, but takes the shape of the tip’s path, it doesn’t lead to a sliding friction between the body and the walls of the environment.

This characteristic is key to the robot’s ability to maneuver tight spaces.

The research team is evaluating the potential application of the soft robot in endovascular surgeries.

Unlike conventional techniques, which could pose a problem when a catheter inserted into an arterial system has to navigate narrower blood vessels, the soft robot doesn’t face the same limitation. The robot’s tip would be able to navigate the intricate pathways of the vascular system and bring the catheter along even through narrow blood vessels without rupturing the blood vessel walls.

Additionally, the soft robot would be useful in search-and-rescue operations, where it could be used to weave its way through debris, without destabilizing it, and deliver water to people who are trapped underneath.

The soft robot would also come in handy in construction, where it could be used to guide cables, wires, and hoses through narrow or hard-to-reach spaces.

As a Wyss Institute staff member, Kathleen O’Donnell led an effort to translate a robotic “exosuit” technology to the clinic, that allows stroke victims to walk normally.

The technology, which was developed by a research team at Harvard University’s John A. Paulson School of Engineering and Applied Sciences (SEAS), in conjunction with the Wyss Institute for Biologically Inspired Engineering at Harvard and Boston University’s College of Health & Rehabilitation Sciences: Sargent College, is a robotic suit that attaches to a “hemiparesis” limb, or a limb that suffers from mobility loss.

The exosuit is attached to the limb stricken with hemiparesis in the form of a piece of skin tight clothing, and uses mechanical power to supply the extra force necessary for the limb to move normally.

The exosuit is powered by a battery worn on a hip belt, and the power is transmitted to the affected limb through a series of cables, similar to the way in which the muscles in our palm and forearm move our fingers using tendons. 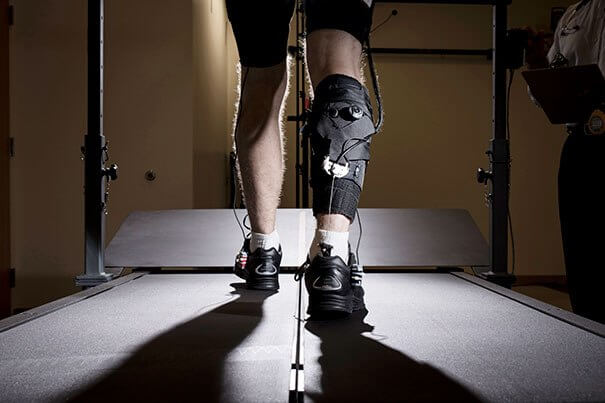 O’Donnell took interest in the prototype, and working with ReWalk Robotics, a company that manufactures and distributes mechanical devices designed to help those suffering from diminished ambulatory abilities, has entered into a partnership with the goal of mass-producing and widely commercializing exosuits based on the prototype.

O’Donnell herself had previously worked as a field support engineer for Integra Neurosciences, and observed first-hand some of the real-world challenges encountered in the operating room and ICU.

“What makes the soft exosuit development so unique is the extreme multidisciplinary nature of the work. In addition to our varied technical expertise as a team, our research with voluntary study participants has been central to our understanding of how we need to design and build these exosuits,” she said in a statement.

Today’s technology is capable of incredible feats, and robots are progressing to perform tasks within nearly every field of science.

Each of these women has contributed significant work to conceptualize, design and promote the creation of impressive new machines.