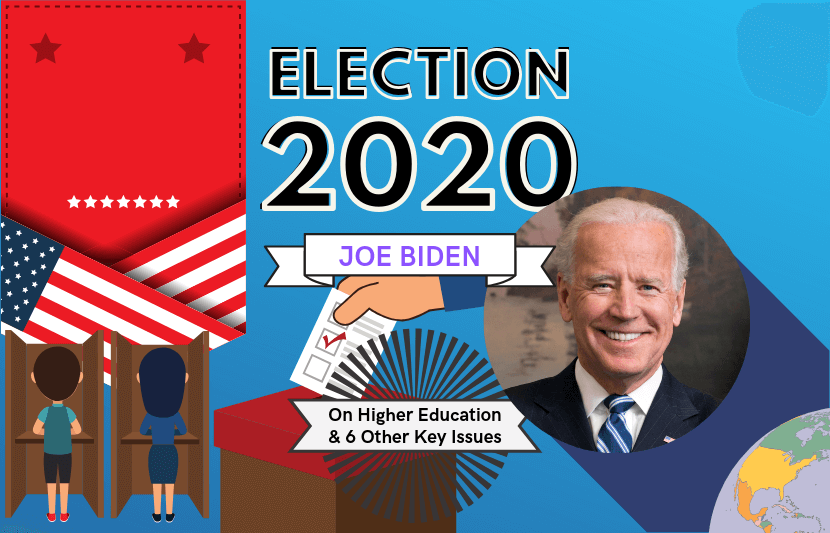 Joe Biden certainly isn’t new to politics. Before becoming the 47th vice president of the United States, he represented Delaware in the U.S. Senate for 36 years — from 1973 to 2009. Up until Biden announced his candidacy, many people questioned if the 76-year-old had the desire to run for office. But to Biden, he never really had a choice. He considers the 2020 election as the “battle for the soul of this nation.”

His announcement video recalls President Trump’s reaction to the 2017 white supremacist rally in Charlottesville, Virginia, in which a young counterprotester was killed. “There were very fine people on both sides,” Trump said.

“And in that moment, I knew the threat to this nation was unlike any I had ever seen in my lifetime,” Biden says in the video.

“We are in a battle for the soul of this nation. I believe history will look back on four years of this president and all he embraces as an aberrant moment in time. But if we give Donald Trump eight years in the White House, he will forever and fundamentally alter the character of this nation — who we are — and I cannot stand by and watch that happen.”

Here is what Joe Biden stands for:

Biden vocalized his support of free four-year college in 2015. In a more recent speech, he explained the details of his plan. He claims that his free-college program would cost $6 billion every year, and it would be paid for by eliminating the “stepped-up basis loophole,” which essentially allows heirs to inheritances to avoid paying capital gains taxes on inherited assets like stocks and land.

The former Vice President takes a more moderate approach to solving the student loan crisis. He won’t forgive all student loans, but instead would simplify income-driven repayment plans.

Under a Biden presidency, graduates making less than $25,000 won’t have any student loan payments and won’t accrue any interest on their loans. Everyone else will pay no more than 5 percent of their discretionary income towards loans. And after 20 years, those who’ve “responsibly made payments,” will see the remainder of their loans forgiven.

Biden recognizes the need to address income inequality, but he has hesitated to support progressive ideas, such as Andrew Yang’s universal basic income, or a hefty tax on the uber-rich that is supported some of his Democratic competitors, including Elizabeth Warren, Bernie Sanders, and others.

Instead, he has shown support for more moderate-progressive ideas like expanding tax credits for low-income people and raising the minimum wage to $15 an hour.

“I love Bernie, but I’m not Bernie Sanders. I don’t think 500 billionaires are the reason why we’re in trouble,” Biden said in a 2018 speech. “I get into a lot of trouble with my party when I say that wealthy Americans are just as patriotic as poor folks.”

Biden has been a long-time supporter of gay marriage, as he believes that “in America, everyone is entitled to be treated with dignity and respect, regardless of who they are or whom they love.”

But his support extends beyond gay marriage. His discourse suggests that he would push for all legislature intended to expand LGBT rights.

In 2018, the Biden Foundation launched a campaign intended to raise awareness of the importance of family and community acceptance of LGBT youth, titled “As You Are.”

“I’m so proud to announce the Biden Foundation has launched this campaign,” Biden said in a statement. “We’ll use our resources to highlight the harms of family rejection — and lift up research, best practices, and personal stories to powerfully show the significant value of family acceptance.”

In the past, Biden has been tough on crime. In the 1990s, he supported crime bills that set strict prison sentencing laws and, according to some, escalated mass incarceration and the war on drugs.

However, Biden has since recognized his actions as mistakes.

In a recent speech at the National Action Network’s Martin Luther King Jr. breakfast in Washington, D.C., Biden referred to a 1994 crime bill that set strict prison sentencing standards saying, “It was a big mistake when it was made. We thought, we were told by the experts, that crack you never go back, it was somehow fundamentally different. It’s not different. But it’s trapped an entire generation.”

“There’s something we have to admit — not you — we, white America, has to admit, there’s still a systematic racism and it goes almost unnoticed by so many of us,” he added.

3. Joe Biden on the Environment

Biden is a staunch supporter of the fight against climate change. In his recently released climate plan, he aims to eliminate the United States’ net carbon emissions by 2050. To do so, he suggests that the federal government should invest $1.7 trillion into clean energy research, among other things, over the next 10 years, which he claims could be funded by rolling back corporate tax cuts.

And in 1986, Biden introduced a climate bill — first-of-its-kind — that called on the president to establish a task force to research global climate.

Biden has expressed his support of the need to transition to renewable energy, but the former vice president has been hesitant to go as far as supporting Rep. Alexandria Ocasio-Cortez’s (D-N.Y.) Green New Deal.

In a 2019 address, however, Biden praised the 100 cities and towns that have committed to 100-percent clean renewable energy. That is consistent with his position in 2015.

“Our energy future is in cleaner, cheaper renewable energy, and all of you understand that clean energy investments have provided financial and social returns,” Biden said in 2015.

In regards to immigration, Biden seems to stand in the middle. He has denounced Trump’s idea to build a border wall. But in 2006, then-Senator Biden voted in favor of the Secure Fence Act, which would fund the construction of a 700-mile fence along the United States-Mexico border.

While serving as vice president, however, Biden was a staunch supporter of the Deferred Action for Childhood Arrivals (DACA) program, which protects children who were illegally brought into the United States.

And at a recent discussion at the University of Pennsylvania, Biden dismissed Trump’s immigration policies, saying, “It’s about xenophobia. This is not healthy.”

Biden stands in opposition to the majority of his Democratic competitors in regards to marijuana legalization. He does not want to see marijauna legalized, as he considers it a “gateway drug.”

In a 2010 interview, Biden said, “There’s a difference between sending someone to jail for a few ounces and legalizing it. The punishment should fit the crime. But I think legalization is a mistake. I still believe [marijuana] is a gateway drug.”

Granted, 2010 was a long time ago, and many politicians have switched their opinion regarding marijauna since then. But Biden has yet to do so.

Biden supports universal background checks and a ban on assault weapons and high-capacity magazines. He also said he would support a federal gun buyback program.

But gun control is nothing new topic to the former vice president. He has been pushing for stricter gun legislature for decades. In 1989, he sponsored a bill that would ban nine assault rifles, including the AR-15. In 1993, he voted in favor of the Brady Bill, which established a five-day waiting period on handgun purchases. And after the Sandy Hook shooting in 2012, Obama made Biden the head of a task force to tackle the issue of gun violence.

Biden has a mixed record on net neutrality. He served as vice president in an administration that strongly supported net neutrality laws intended to protect individual’s rights to a free and open internet. However, as a senator, Biden was hesitant to back net neutrality legislation. In 2006, he sounded skeptical of net neutrality, suggesting that there wasn’t a big need for it. In regards to his potential presidency, it seems safe to say that net neutrality will not be a priority of his.