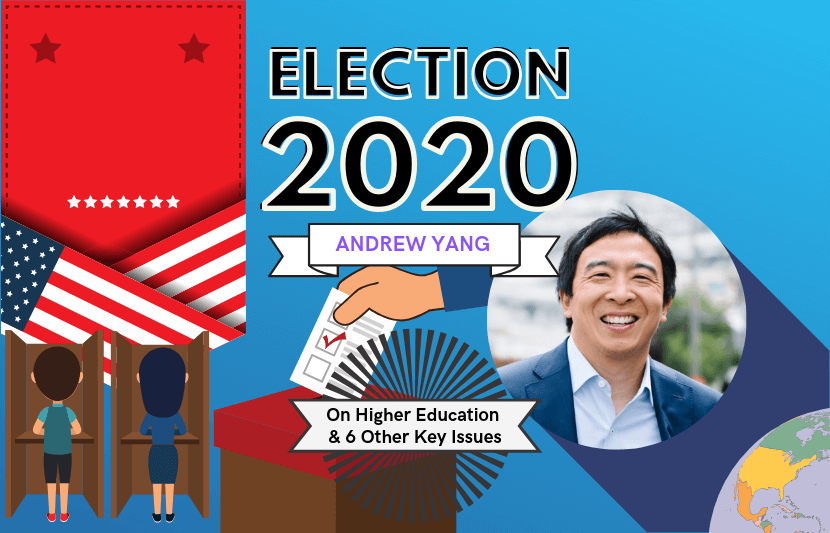 Andrew Yang, an entrepreneur and lawyer born and raised in upstate New York, is running for president, primarily, to protect the U. S. economy from the rise of automation. Unlike many of his competitors for the 2020 Democratic nomination, Yang is new to politics. He spent the majority of his adult life as an entrepreneur and founder of the nonprofit organization Venture for America (VFA), which helps entrepreneurs create jobs in cities that were hit hard by the financial crisis, such as Baltimore, Detroit, Pittsburgh and Cleveland. Since its inception in 2011, VFA has helped launch dozens of startup companies, and it has created over 2,500 jobs across the United States. The nonprofit’s success was enough to catch the eye of President Obama, who named Yang a Champion of Change in 2012 and a Presidential Ambassador for Global Entrepreneurship in 2015.

Here is what Andrew Yang stands for:

Unlike many of his Democratic competitors, Yang is not a supporter of free college. “I love the spirit of free college . . .  I just think it sends the wrong message,” Yang said at a South by Southwest press conference.

Yang recognizes the need to bring down tuition costs, but, largely, he thinks that the United States is “overselling” four-year colleges. Instead, he believes that young adults should consider college as just one of their many options.

“As we have tried to plow more people into college. . . we’ve brought down the college completion rate,” Yang said.

“Forty-one percent of people who start college do not graduate within four years,” he continued. “And so selling college as a panacea is not going to work. It’s subsidizing something that is enjoyed by the top third of the population.

Policy-wise, he wants to address the college affordability problem at its roots — by shrinking tuition costs. Specifically, he wants colleges to work towards adjusting their administrator-to-student ratio from the current 1-to-21 to 1-to-30.

“The ratio was 1 to 50 in the 1970s,” Yang states on his website. “If we can get back to that level then college will be much cheaper.

Yang believes in investing “very highly” in vocational schools, technical schools and community colleges, as they produce skilled workers in necessary fields, such as plumbing and air conditioning repair, that aren’t as replaceable by automation.

“We need to start trying to address the imbalances in our system. And one of the imbalances is that we are overprescribing college and we’re undersupporting vocational trades and apprenticeships,” Yang said.

As a borrower himself, Yang understands how student loans can hamper a young person’s ability to finance their adult life. He is in support of increasing student loan forgiveness efforts to help those who have already graduated from college. He also wants colleges to be more transparent about their students’ post-graduation debt and salary figures.

Additionally, as part of his long list of suggestions, Yang has committed to ask colleges and universities to forgive some, or all, of the loans taken out by students who failed to graduate. He also has proposed allowing students to discharge their student loan debt through bankruptcy, which he believes will force lenders to work with students “in good faith.”

At the center of Yang’s political platform is the concept of universal basic income (UBI). If elected president, Yang wants to give every American over the age of 18 $1,000 a month, which they could put toward paying bills, furthering their education and/or starting their own business, among other things. As American companies increasingly replace human workers with automation, Yang views UBI as vital to our future. His book, “The War on Normal People,” further illustrates this point.

A passage on his website states: “In the next 12 years, 1 out of 3 American workers is at risk of losing their jobs to new technologies — and unlike with previous waves of automation, this time new jobs will not appear quickly enough in large enough numbers to make up for it. To avoid an unprecedented crisis, we’re going to have to find a new solution, unlike anything we’ve done before. It all begins with Universal Basic Income for all American adults, no strings attached — a foundation on which a stable, prosperous, and just society can be built.”

As for paying for universal basic income, Yang proposes consolidating some welfare programs and implementing a “value-added tax” (VAT) of 10 percent, among other things. The VAT would be applied on the production of goods and/or services that a business produces. For support, Yang points to the 160 of 193 countries in the world, including all of Europe, that already have a VAT. (Canada also has a VAT.) He believes that if the United States implements a VAT at just half of the European level, it could generate $800 billion a year in revenue.

Yang is a staunch supporter of LGBT equality. If elected president, he would promote any legislation protecting LGBT rights, increase funding for programs that would educate the public on LGBT issues and appoint LGBT individuals to senior positions in his administration, among other things.

“Who you love and how you love are up to you,” Yang states on his website. “The law should recognize and protect lesbian, gay, bisexual and trans individuals. I’ve always been pro-gay marriage; why should straight people have all of the fun? People are people and all love is beautiful.”

Yang is a strong advocate of criminal justice reform. He has prioritized developing ways to prevent people from committing crimes, rather than focusing on how to punish those who do. If elected president, he would amend mandatory minimum sentencing laws, end private, for-profit prisons, and “shift federal drug policy away from punishment and towards treatment,” among other measures.

“Our rates of incarceration are 4 times higher than most other industrialized countries, and it’s a national disgrace,” Yang states on his website. “People on both sides of the aisle now recognize that our system is badly in need of reform. Our criminal justice system is particularly punitive toward blacks and other minorities. As President I will overhaul the treatment of drug offenses and reduce our rates of incarceration over time.”

3. Andrew Yang on the Environment

Yang believes that combating climate change should be one of the federal government’s top priorities. If elected president, Yang would appoint an “action-oriented” leader of the Environmental Protection Agency (EPA) who would regulate carbon emissions.

“Climate change is up there with automation as a society-wide threat,” Yang states on his website. “Parts of Florida and Virginia are already experiencing flooding and hurricanes are more powerful and frequent. This is exactly the kind of problem that government must rise to meet. As much as we must evolve and take responsibility, the U.S. only emits 15% of the world’s greenhouse gases – this is a global problem.”

Yang believes that, in order to mitigate climate change, the world must transition to clean renewable energy. If elected president, he would invest in technologies that could reverse damage already done by climate change, end tax cuts that give an edge to fossil fuel companies and institute a tax on emissions, which he would use to fund health care initiatives to find solutions to respiratory diseases that were caused by the harmful emissions.

“We should invest resources in large-scale geo-engineering measures like shoring up glaciers and reducing solar exposure to counteract the effects of climate change even as we reduce our emissions,” Yang states on his website. “Waiting around for the oceans to rise is not the American way. If we don’t adopt and lead in geoengineering, China will wind up making decisions for us when it decides to modify the climate in about 20 years.”

As the son of Taiwanese immigrants, Yang is pro-immigration. He supports immigration legislation, such as the Dream Act, which would protect young undocumented immigrants from deportation, allow them to work in the United States, and travel in and outside of the country. He also supports the idea of creating a pathway to citizenship for the 11 million undocumented immigrants already living the United States.

However, he isn’t as loose on immigration as some of his Democratic competitors. He does support the need to increase security on the Southern border. But to do so, he suggests working with border security experts, immigrant advocates and the Mexican government, so we can develop “effective, secure, humane border security.”

Yang, like many of his Democratic competitors, is a proponent of legalizing marijuana, primarily because of its impact on the criminal justice system.

“I don’t love marijuana,” he states on his website. “I’d rather people not use it heavily. But it’s vastly safer than people becoming addicted to opiates like heroin. And our criminalization of it seems stupid and racist, particularly now that it’s legal in some states. We should proceed with full legalization of marijuana and pardon those in jail for non-violent marijuana-related offenses. It’s a safer, less addictive means to manage pain for many Americans.”

Yang believes in the Second Amendment, but he does call for common-sense safety regulations and background checks. Specifically, he supports a “tiered” system, where individuals can gradually obtain licensing for more “advanced” weaponry. After passing a background check, taking a safety course and providing a receipt for a gun locker, someone can buy a hunting rifle or handgun. After a year of ownership, someone would qualify to move onto the second tier, in which they qualify to purchase semi-automatic rifles, and so on.

In regards to regulations, Yang wants to ban all bump stocks, suppressors, incendiary ammunition and grenade launcher attachments. Additionally, he wants to create a federal buy-back program for anyone who decided they no longer want their firearm.

Like many of his Democratic competitors, Yang is a supporter of net neutrality, as he believes everyone should have access to a free and open internet where they can express their ideas, opinions and creations.
“Whoever has the most money or clout is a terrible way to decide who gets the most bandwidth on the Internet,” Yang states on his website. “Net Neutrality has served us well and should continue to be the law. I will make it so as President.”