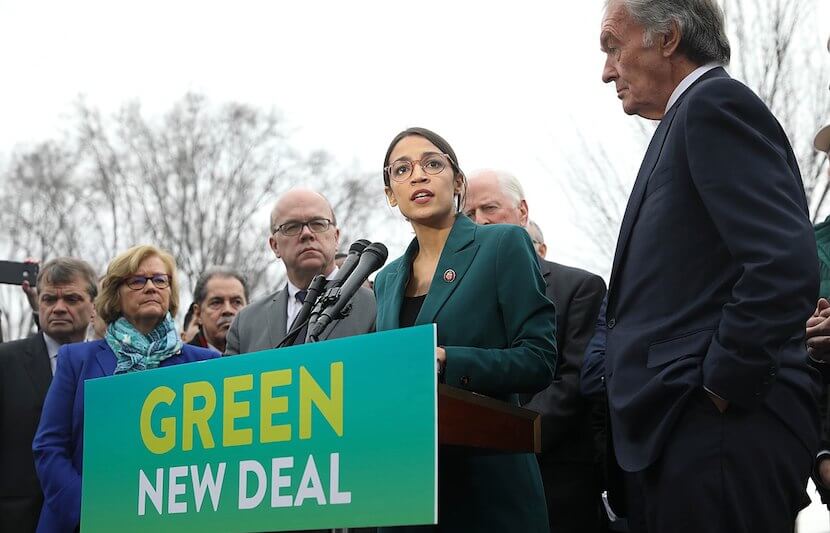 Alexandria Ocasio-Cortez, 29, is now one of the biggest stars in politics. Her dance moves, along with her proposition of the Green New Deal, have made her viral on the internet and a force to be reckoned with in Washington, D.C.

In a short period of time, she has become a millennial archetype.

Just over a year ago, at age 28, she was working as a bartender at Flats Fix, a Mexican restaurant and bar near Union Square in Manhattan.

Even she was surprised by the speed at which things turned around for her.

“Last year I was bartending, and I bought my first couch two weeks ago — shortly after I got health insurance,” she tweeted in November 2018. “So don’t worry, growth doesn’t happen in a straight line! We’re all closer than we believe.”

Last year I was bartending, and I bought my first couch two weeks ago – shortly after I got health insurance 😬

So don’t worry, growth doesn’t happen in a straight line! We’re all closer than we believe. https://t.co/G6ZEIgVoR8

Technically, Ocasio-Cortez’s constituency is the 14th district of New York, which includes the eastern part of the Bronx and part of north-central Queens.

However, her reach extends much further. Her rhetoric, attitude and actions represent her generation — millennials.

For many young adults who have struggled to see their expensive education translate to jobs, her achievements symbolize hope and opportunity.

And her advice — that we are all closer to success than we may believe — hits home.

Truly, it is unfair to lump today’s young adults into one cohesive, like-minded group. Millennials, like any other generation, come in all shapes and sizes.

But there is one quality that young adults undeniably share with Ocasio-Cortez — the stigma attached to being born between 1981 and 1996.

And despite political differences, struggling millennials can all take comfort in the advice that “we’re all closer than we believe” to achieving growth and success.

In Congress, Ocasio-Cortez is defying stereotypes of millennial laziness and entitlement by representing young adults’ drive and determination to excel in their careers.

Her youth hasn’t scared her off. When her colleagues belittle her attitude, drive or “cheap rhetoric,” she barks back.

Not sure why fmr Sen. McCaskill keeps going on TV to call me a “thing” and “shiny object,” but it’s pretty disappointing.

McCaskill promised she’d “100% back Trump up” on his anti-immigrant rhetoric & lost. In MO, almost all progressive ballot issues won. https://t.co/53qKvnr8KG

Her presence in the legislative branch, which is stronger than any junior Congresswoman before her, shakes up a very old group of lawmakers. She’s there, not only to represent her district, but also her age group — all of their strengths, weaknesses and concerns.

Appropriately, one of her first responsibilities as a member of Congress was teaching her Democratic colleagues how to effectively use Twitter.

Her story — quickly evolving from a Boston University-educated bartender to a star lawmaker — perfectly echoes the struggles, opportunities, downsides and benefits of being a part of her generation.

Although, politically, Ocasio-Cortez clearly sits on the far-left side of the spectrum, her ideas are geared towards preserving the future of the earth and creating educational and economic opportunity for millenials, Gen Zs and their children.

Ocasio-Cortez’s proposition to mitigate climate change and reduce income inequality through her Green New Deal, as disputed as it may be, shows she is tired of the government sitting in limbo as the window of opportunity to slow down climate change continues to shrink.

And according to Michael Mann, a renowned climatologist and geophysicist, the plan could work.

“There are no physical obstacles, nothing in the laws of physics, that says it can’t work,” he said. “It’s simply a matter of our commitment, willpower and willingness to reject the status quo.”

And to the Republican and Democratic lawmakers who claim the plan is “too expensive,” Mann says:

“The cost of inaction — in the form of devastating superstorms, droughts, heat waves and floods — is already far greater than the cost of taking action.”

Millennials have grown up with a generally stagnant legislative branch, so to many, Ocasio-Cortez’s desire to act quickly and make a significant impact is rejuvenating.

But to tenured members of Congress, Ocasio-Cortez is portrayed as an eager rookie.

The Speaker of the House, Nancy Pelosi recently shrugged off Ocasio-Cortez’s plan, calling it “the green dream, or whatever they call it” in an interview with Politico.

But while Pelosi and other politicians may have justification to roll their eyes at Ocasio-Cortez’s ambitious plan, many millenials are encouraged to see Ocasio-Cortez stirring the pot, making noise and suggesting beneficial legislature instead of assuming her role as a freshman member of Congress and sitting idly.