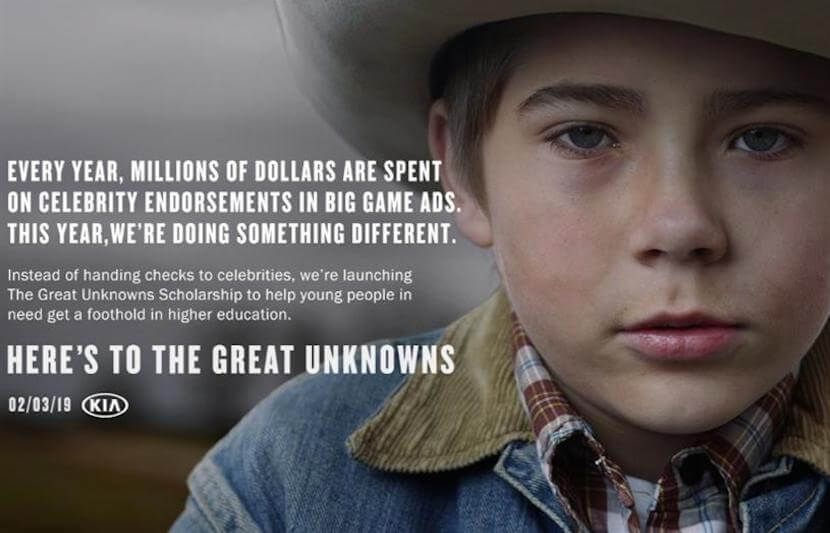 Kia Motors made history tonight by using students and faculty from Troup County Comprehensive High School in Georgia  — and not celebrities — for its 2019 Super Bowl Commercial. Instead of paying celebrities for endorsements, Kia is using the money to fund The Great Unknowns Scholarship.

Kia’s explanation for its unconventional Super Bowl ad is this:

“Every year, millions of dollars are spent on celebrity endorsements in big game ads. This year, we are doing something different. Instead of handing checks to celebrities, we’re launching the Great Unknowns Scholarship to help young people in need get a foothold in higher education.”

The beautifully crafted 140-second commercial melds three stories together: the story of a small town, the pride in cars made there, and the great unknown students.

With a high school as the backdrop for most of the story, the camera zooms in on a young boy in a cowboy hat saying:

“We’re not famous. There are no stars in the sidewalk for us. No statues in our honor. We’re just a small Georgia town of complete unknowns. The closest thing to a world stage is 81 miles away in Atlanta tonight. … Because we’re not known for who we are. We hope to be known for what we do, what we build. … No, we’re not famous, but we are incredible. And we make incredible things.”

The commercial ends with the message:

“Here’s to the great unknowns … Give it everything.”

Rather than pay for celebrity endorsements, Kia will be helping 16 students with $5,000 scholarships.

“Our goal is to discover and reward students who embody the spirit of ‘Give It Everything,’ and help them pursue their academic dreams,” Kia notes in its scholarship application rules.

While payouts for celebrity endorsements are often held behind closed doors, it has been reported that Arnold Schwarzenegger was paid $3 million for a Bud Light Super Bowl commercial in 2014. During the 2005 Super Bowl, Brad Pitt was reportedly paid over $4 million for appearing in a Heineken commercial.

But, Kia now understands that its money is better spent on helping deserving students than promoting celebrities, and it encourages other companies to do the same.

Scholarships are a great way for brands to give back to their communities and create a lasting impact.

Even the funniest Super Bowl ads are forgotten. But deserving students, who otherwise may not have been able to afford higher education, will never forget the company that put them in position to achieve their dreams.

By sponsoring a scholarship, companies elevate the image of their brand within the college student community, including their families and friends.

Taco Bell plans to award $4 million in 2019 through its Live Más Scholarship, which focuses on a student’s passion, rather than academic or athletic performances. Through its scholarships, the company is investing in “the next generation of innovators, creators and dreamers who want to make a difference in the world.”

The Nikon Storytellers Scholarship, which is in its second year, aims to help create the next generation of visual storytellers.

“We understand that it takes dedication to pursue and become successful in creative fields, and we are excited to play a role in supporting students’ achievement in academic excellence through The Nikon Storytellers Scholarship,” said Lisa Baxt, the associate general manager of communications at Nikon.

“Recipients of The Nikon Storytellers Scholarship are empowered to push their creative boundaries and pursue new projects to further their development as young creators,” Baxt said.

As college tuitions continue to skyrocket, a degree in higher education is becoming more and more difficult to attain. Companies should be inspired by Kia, Taco Bell, Nikon and others, and recognize that they can do more to help bring higher education to young people who, otherwise, couldn’t afford it.