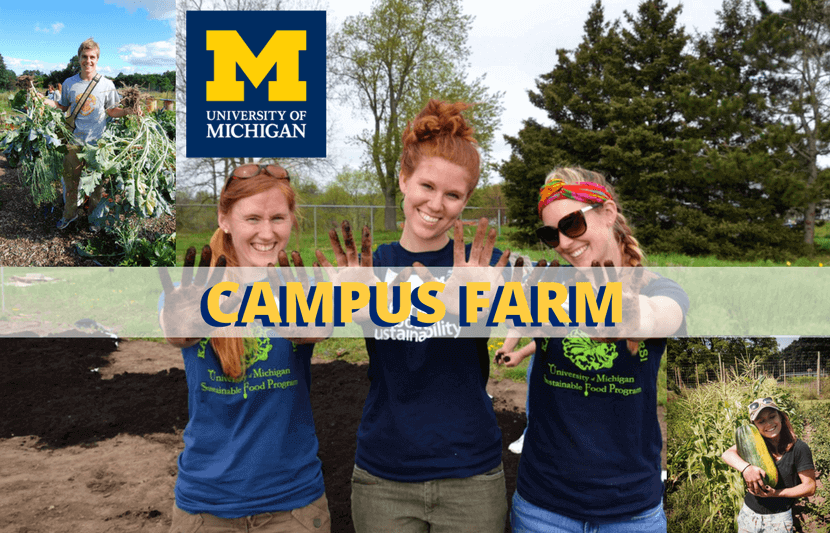 The University of Michigan in Ann Arbor, Michigan has many traditions and qualities that fans and non-fans alike might know and even love. There’s one thing, however, nestled near the Project Grow garden in the Matthaei Botanical Gardens that many people might not be aware of. A campus farm.

Though the Campus Farm began in 2012, the idea for UM’s farm began much earlier. According to record.umich.edu, the idea for the farm first began in the late ’90s, after members of the faculty started a course on sustainable agriculture.

In 2011, the idea for the Campus Farm finally began to take shape. A student proposal led to the Planet Blue Student Initiative Fund providing the budding farm with $42,000 in seed funding.

Part of the Campus Farm’s purpose was to help with other sustainable food initiatives on the school’s campus including a new undergraduate minor in Sustainable Food Systems, new student organizations dedicated to sustainable food and more.

In addition to these food initiatives, students, faculty and more are very involved with maintaining the farm. Anywhere from 30 to 50 students volunteer during the week, while 20 to 30 Matthaei-Nichols staff members and 10 to 15 faculty members volunteer as well.

Produce from the farm is sold at local farmers’ markets, according to campusfarmers.org, as well as taken home by volunteers and even donates to a local organization that donates food to the needy.

The farm is approximately 10,890 square feet, which is on the small side, compared to other campus farms around the country. The oldest campus farm is at Berea College located in Berea, Kentucky.

Began in 1871, Berea’s campus farm spans across 500 acres and includes everything from gardens to woodlots to pastures. Agricultural and Natural Resources (ANR) majors at the college are often employed at the farm and works with both field and horticultural crops, as well as aquaculture, beef cattle and more, according to berea.edu.

Other colleges and universities such as Yale University and the University of Minnesota have their own campus farms as well. It seems to be a growing trend among post-secondary institutions as becoming more eco-friendly and sustainable is on the rise.

As for the Campus Farm at the University of Michigan, the university wishes to incorporate Campus Farm grown food into the dining halls by the Fall of 2017.

Tandra Smith is a journalism major at Georgia Southern University and an avid news junkie. When she’s not consuming as much news as she can, she is attempting to watch something from her infinitely growing My List on Netflix. Sarcasm is one her greatest joys in life.