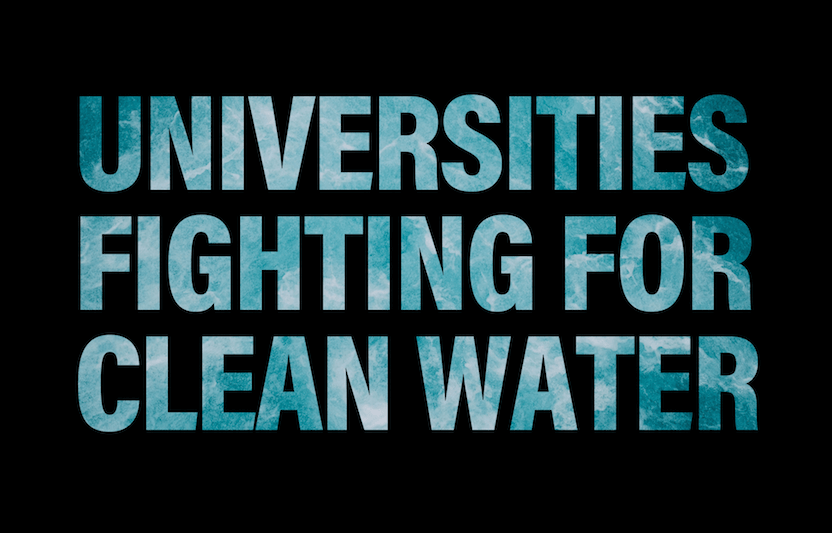 Let us use our imagination.

Three hours of walking into the Kenyan desert, but somehow, your surroundings haven’t changed. The same endless, barren land, the same piercing heat, the same girl marching in front of you with her battered water buckets rattling as they hit against each other.

Suddenly, all the girls in front of you start running, each dragging her water buckets. As the dust picked up by the girls’ running slowly fades out of sight, you see a waterhole. You bend down, dig the sandy waterbed with the lid, and fill your bucket with contaminated water. You tighten your grip over the heavy bucket, brace yourself for another three-hour trek, and remind yourself that you need to retake the entire round trip before you cook dinner and wash dishes.

If you’re feeling desperate to wake up to real life, that’s too bad because this is real life. According to the World Health Organization, at least 2 billion people in the world have no choice but to use contaminated water sources even for drinking.

Now, before you feel devoid of hope, you should know that there are organizations, universities and students like you all around the world who are leading the battle for clean water. Keeping in step with Goal 6 of the United Nations’ Sustainable Development Goals (SDGs), they are all working hard to make clean water a reality for everyone on this planet.

In this article, we highlight some of their efforts to alleviate the water crisis.

Innovation can come from anyone, but everyone needs resources to turn innovation into reality. The XPRIZE Foundation knows that. Using large-scale incentive competitions, XPRIZE doesn’t simply throw money at a problem, but challenges anyone with an innovative idea to solve it.

Keeping in step with the UN’s SDGs, XPRIZE hopes to inspire innovators to help create a world of abundance, where everyone has access to energy, clean water, shelter, education and health care.

On the clean water front, the organization launched the Water Abundance XPRIZE, a multi-million-dollar competition aimed at solving water scarcity with energy-efficient technologies that produce clean water from water vapor in the air, in October 2016.

“Over 780 million people in 43 countries are facing water scarcity due to lack of availability, uneven distribution and access, and contamination,” Zenia Tata, Prize Lead at XPRIZE, said in a statement.

For maximum impact, the Water Abundance XPRIZE sought “to create decentralized, affordable access to water, whenever and wherever people need it” using 100-percent renewable energy.

To win the grand prize of $1.75 million, which was awarded in October 2018, the Skysource/Skywater Alliance developed an easily deployable, energy-efficient water generator that produces a minimum of 2,000 liters of water per day from the atmosphere in any climate at a cost of no more than two cents per liter.

Together, a team of researchers from MIT and the University of California at Berkeley invented a device that pulls water from dry air.

All that’s needed to power the device is sunlight, which will be particularly useful in poor and remote areas that lack access to safe water.

In field tests, MIT researchers have proven that their prototype device can indeed pull water from desert air.

“It’s really rewarding for us as scientists and engineers to be working on such technology and making developments which enable us to get closer to the realization of a full-scale device and address local water scarcity,” said co-lead authors Hyunho Kim, former MIT graduate student, and Sameer Rao, MIT postdoc.

Developed by Abdennour Abbas and his lab team, the “super sponge” uses nanotechnology to remove mercury, a neurotoxin that can cause serious health issues, from tap and lake in less than 5 seconds and from industrial waste in just 5 minutes.

As an example, it would take only a basketball-size sponge to clean Como Lake in Minnesota if it were contaminated with mercury.

Led by Guihua Yu, an associate professor in the School of Engineering at UT Austin, a team of researchers developed a solar-powered technology that absorbs moisture from the air and returns it as clean water.

This new technology could possibly make use of an estimated 50,000 cubic kilometers of water contained in the atmosphere to bring clean, potable water to the most vulnerable regions.

According to Yu, the team is planning to further explore the science behind capturing and releasing moisture and evaporating and condensing water to improve their technology’s performance and to find a more cost-effective design based on hydrogels.

And he’s proud to be a part of a group of universities fighting for clean water for all.

“The attention from the universities on SDGs, especially the clean water-related topics, is a clear sign showing the significance of such topics to the sustainable development of human civilization,” said Yu.

Inspired by beetles and plants, a team of researchers from the University of Texas at Dallas and Penn State University has developed a surface that can rapidly collect water molecules from fog and air vapor and direct them toward a reservoir along lubricated microgrooves.

Learning from desert beetles how to absorb water droplets from fog and from pitcher plants and rice leaves how to quickly direct the water droplets toward a reservoir, the team constructed a surface and etched directional, nano-sized structures into it. They then coated the surface with a hydrophilic liquid lubricant.

The combination of directional grooves and the hydrophilic slippery surface proved to be more effective at capturing and directing water droplets than comparable surfaces.

The researchers have already filed a patent on their “hydrophilic directional slippery surface” or SRS.

“We plan to manufacture the SRS in a larger scale,” said Simon Dai, assistant professor of mechanical engineering in the Erik Jonsson School of Engineering and Computer Science at UT Dallas. “Our group’s future research includes the development of a durable material for water harvesting in a low humidity.”

A team from the University of Maryland has successfully developed an inexpensive, solar-powered evaporator that desalinates water.

“Currently, solar-driven water desalination is becoming one of the most promising techniques to augment clean water supplies due to the abundance of solar energy and seawater as well as its negligible carbon footprint, especially for remote areas that lack electricity or infrastructure,” said two of the researchers, Liangbing Hu, an associate professor of materials science at UMD, and Chaoji Chen, a postdoc associate at UMD.

Made of wood, the evaporator floats on saline water, absorbs solar heat on top, pulls up the saline water from below, converts it to steam on its top surface, leaves behind the salt and produces potable water.

At Monash University, Australia, a team of researchers led by Xiwang Zhang, a professor of chemical engineering, developed a solar-powered technology that desalinates seawater to produce clean, potable water to thousands of off-grid communities.

Through a cotton thread, with 1-millimeter diameter, the saline water is pumped up to the evaporation disc, which is made of super-hydrophilic filter paper. The filter paper traps the pure water and pushes the remaining salt to the edges of the disc.

“We hope this research can be the starting point for further research in energy-passive ways of providing clean and safe water to millions of people, illuminating environmental impact of waste and recovering resource from waste,” Zhang said in a statement.

At Politecnico di Torino, Italy, a team of researchers has successfully developed a prototype of a floating device that collects seawater using a low-cost porous material, heats up the collected seawater using solar energy, and separates salt from the evaporating water that then becomes potable.

Unlike conventional methods that require costly and cumbersome mechanical or electrical components, such as pumps, their technology simply absorbs seawater through its porous material.

In a statement, the researchers said they successfully produced up to 20 liters of drinking water per square meter exposed to the sun per day.

Another method that could help water-starved areas is by using plant materials as a means to filter unclean water.

Researchers at Carnegie Mellon University have developed a way to combine seed proteins from the Moringa Oleifera plant, a commercially valuable plant native to India, with sand filtration techniques to produce a simple and effective filtration mechanism.

According to Tilton, f-sand will be easily adapted by local users, since the technique requires few tools and fairly simple work.

“Systems could be set up to work at a very localized level, probably even at the individual household level,” he said.

Led by Qilin Li, a professor of civil and environmental engineering and of materials science and nanoengineering, Rice University researchers are working on a treatment system that can selectively pull harmful toxins from drinking water and wastewater from factories, sewage systems, and oil and gas wells.

The system selectively pulls target ions from fluids passing through a maze-like system. Then, when the pores get filled with toxins, the electrodes can be cleaned, restored and reused.

The treatment system is expected to be a low-cost, energy saving alternative to traditional systems.

From the Chinese Academy of Sciences in Beijing and Yangzhou University in Jiangsu, a team of researchers developed an energy-efficient, water purifying technique by using nanosheets of graphitic carbon nitride, an inexpensive material that absorbs the light, generates reactive oxygen and helps kill bacteria.

Unlike traditional methods of water purification, their technique uses a unique catalytic design that offers both environmentally safe and efficient water treatment. Their prototype not only required just 30 minutes to purify bacteria-rich water, killing over 99.9999 percent of bacteria, such as E.coli, but also didn’t leave behind secondary pollution or heavy-metal-ion residues.

On top of researching for innovative ways, colleges are sharing their technologies with the people who need them to work the most — the locals in water-scarce regions.

At Cornell University, as one of many projects led by the Tata-Cornell Institute for Agriculture and Nutrition (TCI), a research initiative focused on solving poverty, malnutrition and rural development in India, AguaClara builds solar-powered, electricity-free water treatment facilities in rural regions.

Developed by Cornell University, the technology removes suspended matter and fecal contamination from water, uses solar energy to pump lowland wells to an elevated tank in a village and then, without electricity or depending on fossil fuels, delivers clean water into village homes.

In order to encourage community ownership and governance, AguaClara usually partners with local organizations to build, operate and maintain the water treatment facilities.

For example, in Jharkhand villages of India, an AguaClara’s facility partners with PRADAN, a local non-governmental organization (NGO), and trains locals to operate and ultimately maintain the facility through an affordable tariff system.

In Northern Ireland, Ulster University is leading a £6 million research project to develop low-cost technologies that can deliver safe drinking water in developing regions. Working with multiple universities from other countries, the Safe Water Project brings in experts from multiple fields, such as engineering, business, law and psychology.

Initially working with rural communities in Columbia and Mexico, the team involves the locals from the very beginning of the project so that the technologies will meet the locals’ needs.

Fighting together for clean water and more

Most times, it’s easy to take things for granted. But just because you can walk up to a water fountain on your way to a class and drink out of it without having to worry about it being contaminated, it doesn’t mean it’s that easy for everyone else around the globe. Fortunately, organizations and universities are not turning their blind eye to the problem. Instead, they’re doing what they do best to bring clean water to every household — innovation, ideation and action.

“Universities and especially 18-22+ year olds are the future of our earth,” said Chen. “Learning and caring more about SDGs and clean water will help 18-22+ year olds to address these challenges more efficiently when they graduate and enter society.”