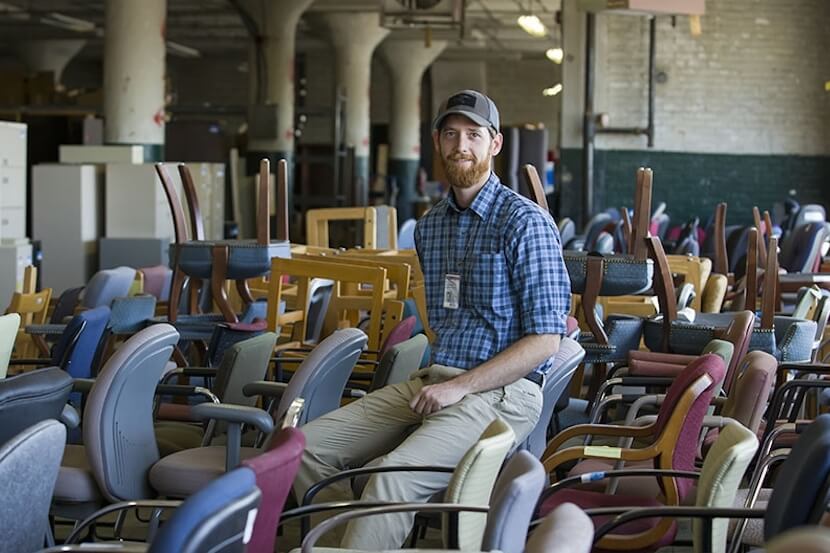 In 2014, Americans generated about 258 million tons of municipal solid waste, which is defined by the U.S. Environmental Protection Agency to exclude industrial, hazardous and construction waste. That translates to each person producing 4.4 pounds of trash per day. That’s a lot of trash!

More than half of the trash generated is either incinerated or landfilled. In 2014, about 33 million tons were incinerated, and about 136 million tons ended up in landfills.

Fortunately, there is also an upward trend to recycle and compost. In 2014, about 66.4 million tons of trash were recycled and about 23 million tons were composted.

Many universities and colleges have joined the recycling movement by ensuring that surplus items find new homes. One such university is Temple University in Philadelphia, so TUN spoke with Kathleen Grady, Temple’s director of sustainability.

Temple Surplus to the rescue

Temple University is committed to sustainability, and carries out its objectives through the Office of Sustainability, which has many initiatives in place to green its campus.

One such initiative is Temple Surplus, a program that recycles unwanted but reusable items owned by the university. Surplus programs are key to sustainability.

“When we think about successful sustainability initiatives, we think of a surplus property program,” said Grady.

Institutions can really help the environment, cut costs and generate revenue at the same time.

Temple Surplus functions essentially as a central platform for collecting and redistributing all types of equipment, such as office chairs, tables, chairs, shelving, and filing cabinets. Any item that is not recycled for university use is either sold or donated.

Temple Surplus uses outside warehouse space to store surplus property. Before the program was implemented, these items might languish for months or years either in a Temple building or central warehouse. Now these items are placed on a strict timeline that finds new homes for them within the university, or they are sold to the public, or donated to local charities.

Eric Grzybowski, Temple’s surplus property coordinator, estimates that about 500 items have been listed for sale since he joined Temple in January this year. Every week the program adds about 80 to 150 items to the list. The program raised $19,000 from sales in March with individual transactions averaging $50. There were also certain significant sales, according to Grzybowski. Someone on eBay spent $350 on a chair that would match one he already had. A local doctor bought about 80 pieces of shelving, tables and chairs to ship to Pakistan, where the items would be used to help outfit a hospital. Grzybowski also sold four lots of folding tables and stacking chairs – each originally listed at $75 – together for a total of $1,600.

How does Temple Surplus work?

In June 2016, Temple University adopted a formal policy, spelling out the procedures for the handling of property that are no longer in use by university departments, schools and colleges. While the disposition of computer and electronic surplus property is handled by the Computer Recycling Center, other surplus property fall under the purview of Temple Surplus, which is jointly run by Grady and Mark Gottlieb, associate director of operations and logistics.

Temple University has benefited in many ways from the Temple Surplus program. First, the university saves money by spending less on new purchases and hauling less trash to landfills, thus maximizing tuition dollars. Second, the program generates revenue through sales of retired items that are not claimed for use internally. Third, the program helps the local community in need. Last, but not least, the program reduces waste thereby helping the environment, and we can’t put a price on that.

The university is able to promote reuse, reduce waste and the associated hauling costs, and generate revenue to help keep Temple affordable and accessible for our students.