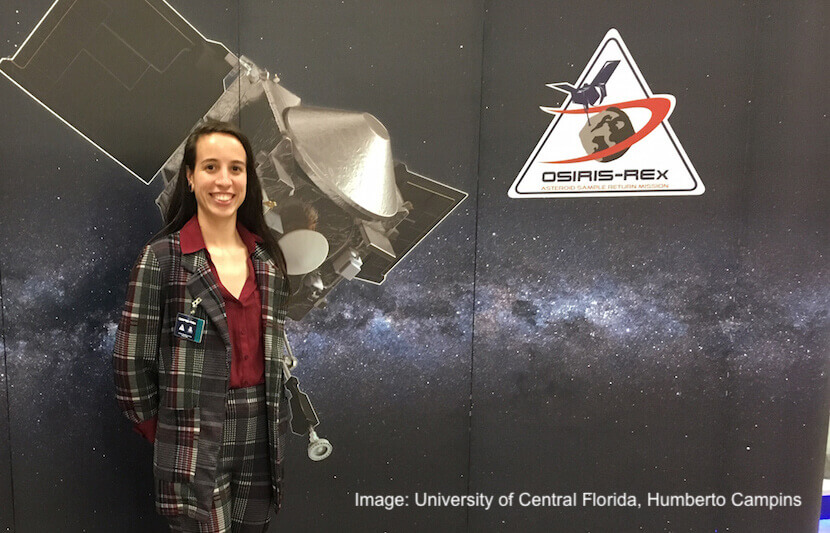 For Jennifer Nolau, a University of Central Florida (UCF) physics student and self-described “sci-fi nerd,” working this past summer with NASA was a dream come true.

Instead of sleeping in or working a part-time job — as most undergrads do during summer break — Nolau spent her time examining images of boulders and rocks from the asteroid Bennu, the focus of NASA’s OSIRIS-REx (Origins, Spectral Interpretation, Resource Identification, Security-Regolith Explorer) mission. OSIRIS-REx is the first American mission of its kind.

NASA believes that Bennu’s regolith — the outer layer of dust, soil and broken rock — may contain molecular clues to the origins of life and Earth’s oceans. A primary goal of the mission, which has been ongoing since 2016, is to return a sample of Bennu back to Earth.

But, NASA had some trouble determining the best location for grabbing that sample. Images taken a few months earlier by the spacecraft revealed that the rocky surface of Bennu was mysteriously shooting projectiles — boulders and rocks — into space. So, the mission had to be restructured to enable more pictures to be taken to find the safest spot to collect a sample.

Working for one week at the hub of the OSIRIS-REx mission at the University of Arizona (UA) in Tucson and the rest of the time virtually from the comfort of her own Orlando apartment, Nolau sifted through more than 100 images, observing hazardous projectiles, determining their size and location, and helping to decide the safest place on the asteroid to collect a sample, she explained.

Just recently, the team identified four locations as finalists for where to collect the sample.

In December, the team plans on narrowing that list down to two sites, one primary and one backup. And to help, Nolau will be called back to work in early October, she said.

“I still can’t believe it,” Nolau said in a statement. “This is just so mind-blowing. I mean I’m an undergrad and here I am part of this NASA mission. I’m making connections here that will help me establish my career when I graduate. The people I’m working with are amazing. I’m still pinching myself.”

Nolau, who is now 25 years old and specializing in planetary science, has clearly found her calling. But, it took her some time. She, like so many other students, started college pursuing a degree that wasn’t right for her.

“I initially started back in 2012 working towards a biomedical science degree, and I was just not feeling it,” Nolau said. “Being an A+ kid my entire life, I was having the hardest time. I would put so much energy and everything into it, and my effort wouldn’t be reflected in my grades.”

In addition to majoring in physics with a specialization in planetary sciences, Nolau is now minoring in mathematics, which she says is a field she’s always been comfortable in.

And since changing her major in spring of 2016, she has felt rejuvenated and has had constant momentum. Despite being a non-traditional undergraduate student, she’s not missing a beat.

Nolau told UCF she knew she had made the right decision by switching her major to physics after taking a course with professor Humberto Campins last year. Campins, who is also working on the NASA mission, is the one who suggested Nolau pursue this image-analysis job.

And as they say, connections are everything.

While Nolau was at UA, she said she had the opportunity to meet many members of the NASA team, something she would be unable to do if she only worked virtually from her couch in Orlando. She developed relationships with key members of the team — namely, Carina Bennett, the mission’s image processing engineer — that could jumpstart her professional career and maybe even last a lifetime.

Perhaps most importantly, Nolau was introduced by Campins to T.D. Swindle, the director of the Lunar and Planetary Laboratory at UA, which resulted in the two of them collaborating on a separate research project, UCF reports. And last month, Swindle presented their research, on behalf of Nolau, at a meeting of the Meteoritical Society in Japan.

“You have to take advantage of every opportunity,” Nolau said in a statement. “Professor Campins and UCF have opened the doors for me. I want to do all I can to be ready for my first job, my first grant. I want to make them proud.”