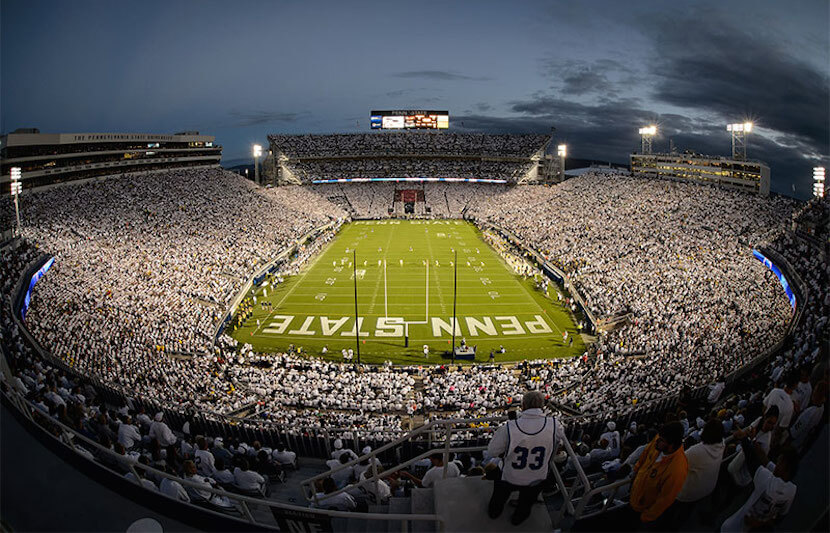 Penn State University’s Beaver Stadium, home to the Nittany Lions football team, is the second largest university stadium in the U.S. It hosts seven home games each year with attendance for each game reaching anywhere from 110,000 to 150,000. Imagine the waste generated in the stadium and the surrounding parking lots, which together occupy 110 acres of land!

He is also using his expertise to help other sports venues, such as Pocono International Raceway and NASCAR Green, find “green” solutions.

Michael’s efforts to reduce waste at Beaver Stadium started in 2013 when he partnered with Green Sports Alliance and NatureWorks to make the President’s and Governmental Affairs suites section of Beaver Stadium a zero waste showcase.

Michael also collaborated with various departments at Penn State, including the President’s Office, Office of Donor Relations, Office of Governmental Affairs, Hospitality Services, Intercollegiate Athletics, and Office of Physical Plant, to make the initiative a success.

He relied on more than 30 Penn State students as his zero-waste ambassadors at each game to educate and engage fans on the zero-waste goals.

“I have had multiple undergrad and graduate classes working on the campus zero waste projects,” said Michael.

“This has been good experience for the students and they have made a tangible impact on operations while gaining valuable skills.”

The initiative introduced the use of eco-friendly cups, utensils, plates and straws from Ingeo.

“Packaging and foodservice items were the first step in achieving our zero waste goals,” Michael said in a statement.

“Having Ingeo’s ASTM-certified products allowed us to have confidence that the materials we collected would be compatible with our university composting system. We were also confident that the suites clientele would not be disappointed in the performance of the foodservice items provided by StalkMarket.”

Compostable materials from each game were taken to Penn State’s own composting facility and converted into mulch over time, so it could be used on campus or sold to others.

“We are lucky to have our own state-of-the-art composting facility where we can test various materials and send compostables with a very small transportation footprint,” said Michael.

He credits NatureWorks and PepsiCo for their contribution to the university’s composting efforts.

“NatureWorks has been a valued partner in all that we have done in this area, and their experts have given us lots of advice and products to test,” said Michael.

“PepsiCo has also been a key partner in working with us on cutting edge compostable packaging. Their R&D group is working on new packaging products that will be used with potato chips and other snack products.”

The initiative mandated waste audits, which were taken after each game, so the research team could learn about the composition of waste created and figure out where they should direct their efforts.

Extension of knowledge to other venues

Michael and his team are using the knowledge they gained from the zero waste showcase to expand the initiative to all of Beaver Stadium and other Penn State sports venues.

“We have extended that knowledge to other parts of football operations and are currently discussing a comprehensive program for the venue,” Michael said.

They are also applying that knowledge to Penn State’s new Pegula Ice Arena.

“We have made part of their Hospitality operations zero waste while also reducing waste created in the entire arena,” said Michael.

The research team has also been working with the Pocono Raceway and NASCAR Green to help them become more sustainable.

“We started out with fan surveys (showing that racing fans really do care about environmental issues) and then started to tackle their operations by doing waste audits and changing the waste management process,” Michael said.

“Today Pocono has an excellent system in place to donate leftover foods while composting other materials like post-consumer food and compostable foodservice items.”

Michael believes that it would ordinarily take 2-3 years for sports venues to have a “comprehensive sustainability plan” in place. In some cases, however, it could take less time to reach zero waste.

“Some sports venues could be close to achieving zero waste in at least part of their operations within the first year, but this would take a lot of planning and dedication by leadership and staff,” he said.

To succeed, zero waste programs in sports venues must educate and motivate fans.

“Motivating fans is one of the most difficult challenges to achieving zero waste in a sports venue,” said Michael.

“First, the venues have to make recycling or composting easy and convenient, and we also need to make it part of the local culture. This culture change has proven easier in locations like Seattle or Portland, OR, but more difficult in other parts of the country.”

The easiest way to reduce waste would be to limit what’s allowed in a venue.

“One key factor to making these systems work is that nothing is allowed in the venue unless it can be recycled or composted,” he said.

“This is fairly easy for closed venues like a basketball arena, but very difficult in places where there is tailgating or where fans can bring in their own coolers.”

Sports venues generate a tremendous amount of waste. It is critical therefore that they become more environmentally friendly.

Michael feels positive about the direction sports venues are taking.

“The whole ‘green sports’ world has really taken off in the last few years,” he said.

“This presents a fantastic opportunity to not only reduce the environmental footprint of these operations, but also to use the vast reach of sports to educate fans about the importance of sustainability.”