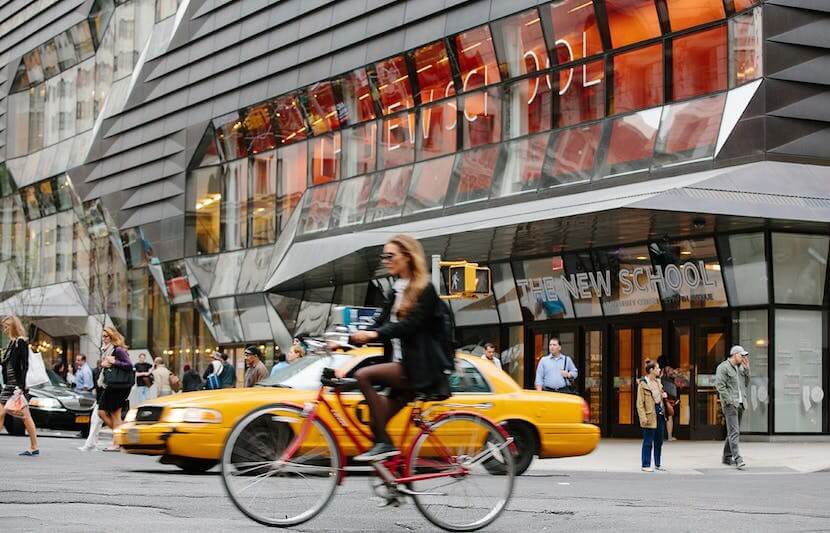 The New School, located in the heart of Manhattan, is taking groundbreaking steps to advance environmental sustainability efforts in New York City.

The university has constructed a 16-story LEED Gold certified University Center, served as the only college or university participant in the first ever NYC Zero Waste Challenge, and divested entirely from fossil fuels.

The University Center (UC), which opened in January 2014, is one of the most environmentally friendly university buildings in the country. It perfectly portrays The New School’s dedication to environmental sustainability.

Located at Fifth Avenue and 14th Street, the UC has a total floor space of 360,000 square feet. It holds classrooms, an 800-seat auditorium, a cafeteria, a cafe, and serves as a residence hall for up to 600 students. Its green roof, cogeneration plant, and smart lighting and climate systems help save energy, water, and waste.

Because the building is located in the midst of busy Manhattan, it lacks a typical grassy quad like most colleges have. But, in an effort to create a similar space where teachers and students can interact, the university implemented “community stairs.” The open stairs sweep through communal areas in the building so peers and colleagues can easily conversate. While there are elevators that are programmed to maximize efficiency, the open stairs are meant as the primary means of circulation within the building for those who are able to do so.

Connected to the stairs are circulation paths that weave throughout the building. The paths eventually open up into “sky quads-interactive spaces,” which are also intended to initiate  conversation between students and faculty. The interactive spaces are comprised of study centers, student resource centers with meeting rooms, cafés, student lounge areas, and pin-up spaces for design studios.

The building also has bike storage rooms and showers to facilitate biking, walking and running between the home and the school for those who commute.

In February 2016, The New School was invited by the NYC Mayor’s Office of Sustainability to participate in the Zero Waste Challenge. The Challenge, which was created as part of the city’s aim to send zero waste to landfills by 2030, asked the participating institutions to aim for at least 50 percent waste diversion from landfills.

The New School contributed to the city’s Challenge by submitting data and giving feedback regarding the realities that the university faced being a multi-building campus with irregular patterns in the building’s waste streams, said Johnson.

“We found that collecting data on randomly selected days as suggested was not producing an accurate estimation of our total waste because we had ebbs and flows in the types and amounts of recycling versus compost versus landfill waste coming out of each building on different days of the week,” said Johnson. “Sharing our observations and experience with the Mayor’s Office gave them information that will help them improve their methods of tracking data as the city moves toward sending zero waste to landfill.”

Currently, the university is contributing to NYC’s zero waste goal in a number of ways. The New School has changed the signage on the campus waste bins so passersby can more easily distinguish between where to put recyclable objects, compost, landfill waste, and batteries.

The university also started a program called Good As New to reuse school supplies by giving them to incoming students for free.

More universities and colleges in the area are beginning to think green. Professors from Parsons School of Design are starting to incorporate zero waste practices in their design courses, said Johnson.

In May 2018, the Tishman Environment and Design Center at The New School is partnering with the Global Alliance for Incinerator Alternatives to host a Design, Justice, and Zero Waste Conference and Research Collaborative aimed at addressing the impact of production, consumption and waste on environmental justice communities, workers and vulnerable populations.

“At the conference, we will collectively create a Circular Action Plan and Research Collaborative for long-term partnerships and information sharing,” said Johnson.

Environmental sustainability practices are not unfamiliar to The New School. In January 2015, President David Van Zandt called for the university to eliminate all fossil fuel usage.

“The New School has a long history of engaging in and offering creative solutions to society’s most pressing issues,” Van Zandt said in a statement. “Climate change, the effects of which are already being felt by our most vulnerable populations, is one of the greatest challenges we we [sic] face in the 21 century. With our formidable talents in design and the social sciences, this new plan sets the course for our leadership in the field.”

To do this, The New School had to get rid of all unethical stocks, bonds and investment funds related to fossil fuels.

“When The New School’s Board of Trustees approved the motion to divest from all fossil fuels in 2015, that decision also came with a mandate for the Tishman Environment and Design Center to lead an initiative to incorporate sustainability learning outcomes that account for the social, political, and economic dimensions of environmental issues into the academic experience of all New School students,” said Johnson.

“We will not take a single, cookie-cutter, approach to teaching and learning about sustainability for all of our roughly 10,000 students, but we will be working with the various colleges and programs to devise the best approach for each area of the university,” said Johnson.