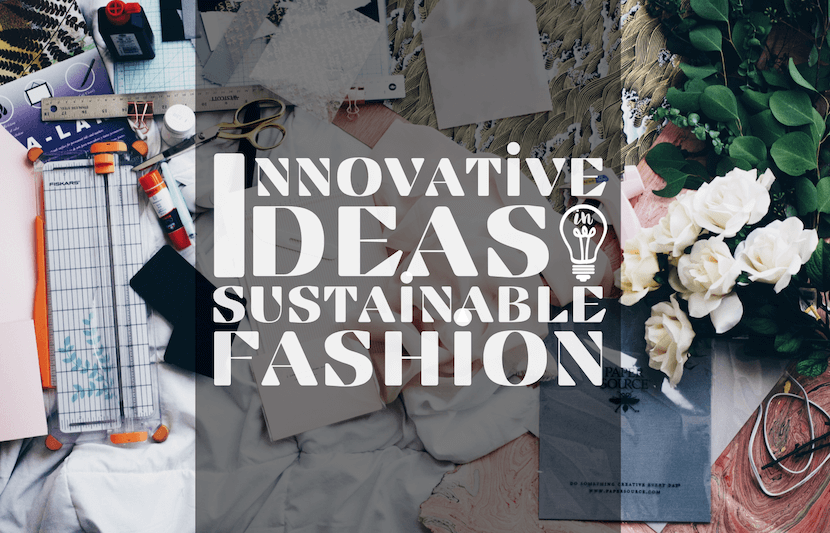 According to the U.S. Environmental Protection Agency, more than 65 percent of all types of textiles generated in 2015 ended up in landfills, meaning they were unable to be composted or recycled among humans.

Think of it like this — if your room were the Earth, your entire floor would be piled with trash that just cannot be vacuumed, mopped or thrown away.

In an effort to fix this problem from the ground up, university researchers and textile companies are tapping into unconventional sources — from marine debris to food waste — to develop sustainable fiber materials and processes that won’t harm the Earth.

“Fashion, to most people, is an ephemeral expression of culture, art and technology manifesting itself in form,” said Young-A Lee, an associate professor in Auburn University’s College of Human Sciences and lead researcher of a team that used green tea byproduct to develop biodegradable alternative to leather.

“Fashion companies keep producing new materials and clothing, from season to season, year-to-year, to fulfill consumers’ desires and needs. This is really the time to think about where these items eventually go.”

Out of sight, but still here

Starting from the mid-2000s, fast fashion has made huge profits by watering down the trendiest styles from luxury brands’ runways to fit both the taste and budget of general consumers.

In fast fashion, because the output (the clothes) is low-priced, the input (the material) also has to be cheap.

Made of plastic, polyester is not sustainable — aside from other environmental consequences, polyester uses up more than 342 million barrels of oil in manufacturing each year and takes over 200 years to decompose, according to the Ellen MacArther Foundation report.

Plus, even natural fibers that are widely used in the industry, such as cotton and leather, can be extremely damaging to the environment.

For example, as the second most widely consumed fiber after polyester — about 21 percent worldwide — cotton is highly water-intensive to cultivate and process, requiring up to 20,000 liters of water to make a single t-shirt.

And about 800 tons of waste from leather production is generated annually worldwide. Usually, this waste is sent to landfill and leather takes about up to 40 years to decompose.

But, of course, for a regular consumer buying a $20 dress from H&M to wear for one night at an end-of-year party, sustainability is generally not the first thing that comes to mind.

According to a 2017 report by the Ellen MacArthur Foundation, we now buy twice as many clothes than we did 15 years ago and we wear each item 20 percent less than before.

The $20 dress is very easily discarded after a few wears, another cheap dress is bought and this vicious habit continues for countless other customers all around the world.

There remains a way out

But the most important fact remains and it’s sure to give us hope. Both the interest in and use of sustainable materials are growing slowly, but steadily.

According to Textile Exchange’s 2018 Preferred Fiber and Materials Market report, compared to 2017, not only did the number of fashion companies participating in sustainable practices increase by 17 percent, but also the amount of sustainable fibers used, including recycled polyester, either increased or remained steady.

And a rising number of fashion companies and researchers are willing to invest in the positive promises of sustainable fashion.

At Auburn, inspired by the cradle-to-cradle design, a design concept that aims to create a continuous cycle of reuse and regeneration, Lee and her research team used green tea byproduct to develop a completely biodegradable alternative to leather.

“Inspired by cradle-to-cradle design framework, I was curious about turning food waste into fashion system … During that time, we had a chance to watch Suzanne Lee’s TED talk about her work using Kombucha,” said Lee.

After a few days, a gel-like film that started out as bubbles, formed and floated on top of the jars. Instead of putting the SCOBY film into another jar of green tea to make kombucha tea, Lee and her team harvested and dried these SCOBY films, which proved to have similar properties as those of leather.

According to Lee, their next step is to further develop to solve water absorbency issue. They hope to partner with an apparel or footwear company to bring their material to the market.

Co-founded by Tammy Hsu, a doctoral researcher at the University of California, Berkeley, Tinctorium uses engineered bacteria to produce the world’s most sustainably dyed jeans.

“My background is in bioengineering and synthetic biology, so I was always interested in making natural molecules using bacteria,” said Hsu. “Since indigo is a plant-based product, it was a good candidate for biosynthesis in bacteria. It seemed like an opportunity where we were well suited to provide a unique solution to this big problem in denim production.”

The “big problem” Hsu alluded to is the environmental toll from using toxic and corrosive chemicals to produce indigo and dye denim.

Hsu and her team used E.coli bacteria to create indican, which is water soluble and is later converted into indigo that dyes the yarn. In this process, they don’t need to use multistep chemical synthesis that is harmful to both the environment and human skin.

According to Hsu, since they have proved that the process works at the lab scale, their next step is to develop their bacteria and fermentation process to work at larger volumes.

“We are still doing some research and development to improve our dye production, and our next step is to engineer our bacteria to produce dye more efficiently so that our process can be cost-competitive when we scale up,” said Hsu.

Already widely used in the medical field, biofabrication offers so many new opportunities for the fashion industry. Using living organisms, such as bacteria and yeast, biofabrication allows materials to be grown and then dyed without the toxic chemical processes commonly used in both synthetic and natural fibers.

Modern Meadow’s Zoa technology takes the DNA of yeast to produce collagen protein, ferments the protein and edits the DNA to customize both the structural and aesthetic properties of the final fiber.

The company is currently working on scaling the material for eventual commercial production and product launch.

The company’s efforts are in direct support of all of the United Nations’ 17 Sustainable Development Goals.

A Spanish clothing brand started in 2009, Ecoalf uses wasted resources, such as plastic bottles, fishing nets and used tyres, as a raw material to make coats, jackets, flip flops and more. The company has recycled 200 million plastic bottles into clothing so far.

“The concept of the brand came after the birth of my son, Alfredo (the company is named after him) when I was reflecting upon the world we would leave to the next generation and my frustration with the excessive use of the world’s natural resources,” Javier Goyeneche, the president and founder of Ecoalf, explained on the company’s history page.

Started in 2015 in Spain and Thailand, Upcycling the Oceans is one of Ecoalf’s sustainable projects that works with local fishermen to collect marine debris and upcycle it into top quality threads and then into garments.

While some may think of recycled materials as low in quality, PrimaLoft fights off this stereotype as groundless.

While used by leading outdoor brands, such as the North Face, Adidas and Patagonia, and offering one of the highest performing insulation materials in the market, PrimaLoft developed its first fabric out of recycled polyester in 2016.

Recently, PrimaLoft  launched a 100-percent recycled and biodegradable polyester fabric that is expected to be available in the market by fall 2020.

This fiber is not only environmentally friendly, but it also eliminates odor, protects the wearer from ultraviolet rays and is waterproof. Today, the company sells fabric to leading brands, such as the North Face, Adidas, Victoria’s Secret and American Eagle.

When all is said and done, everything comes down to us, the consumers. Fortunately, studies show that young consumers in their 20s and 30s are more likely to buy sustainable products or demand that brands use more sustainable practices than the general consumers.

“College students, young consumers, often have limited budget/finance, which often lead them to buy cheap fast fashion items. This does not mean that they are not conscious about the sustainability movement in our society but the sustainable products are not affordable to them.” said Lee.

While brands have a part to play in further developing their technology to be cost-competitive, consumers also have a responsibility to break themselves free from their wasteful habits.

“I think it’s really a change in mindset — we are used to thinking of clothing as inexpensive and almost disposable, but this is really an unsustainable practice,” said Hsu. “If we want to take care of our natural resources, we need slower, more thoughtfully-made clothes that we wear and treasure for longer.”

And students can do their part to help out.

“Students can show support for sustainable fashion by buying secondhand or thrifted clothes, or by buying from fashion brands that use ethical and sustainable practices,” said Hsu. “If we show the fashion industry that consumers will choose the sustainable option, then they will make it a priority in their practices.”