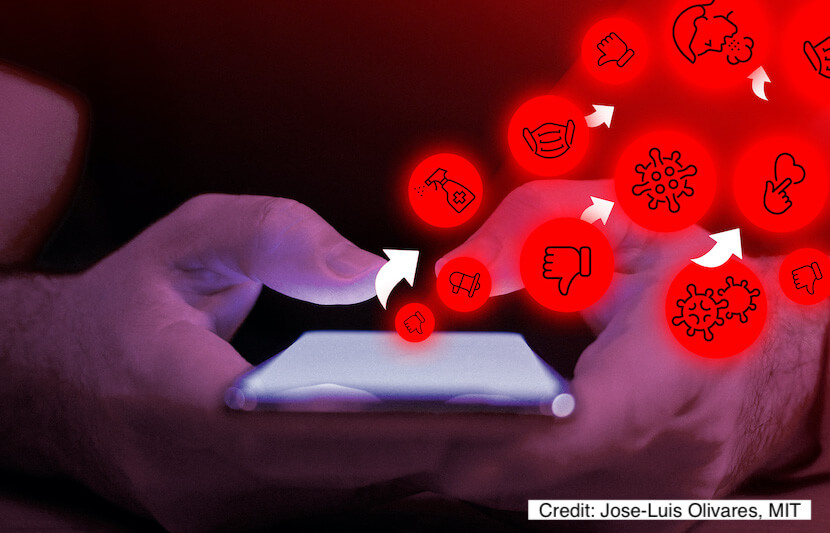 Researchers from MIT and the University of Regina have determined a way to keep social media users from sharing fake news stories about COVID-19. Social media companies could use the researchers’ findings to limit the spread of false information on their platforms.

Through a number of tests on social media users, the researchers found that, most often, people share false information about COVID-19 simply because they fail to think sufficiently about the accuracy of content before sharing it.

The researchers claim that, by design, social media platforms encourage rapid browsing of news headlines, elevate hot-topic news items and reward users who share and post eye-catching content by giving them likes, followers and shares, even if the information they share happens to be untrue.

A slight “accuracy nudge,” however, could remind social media users to consider the concept of accuracy while they’re scrolling and sharing on the platforms, the researchers suggest.

“The idea is, if you nudge them about accuracy at the outset, people are more likely to be thinking about the concept of accuracy when they later choose what to share. So then they take accuracy into account more when they make their sharing decisions,” MIT professor David Rand, a co-author of a new paper detailing the findings, said in a news release.

Social media platforms could administer “accuracy nudges” in many ways. One suggestion the researchers brought up in the paper is the idea of periodically surveying users by asking them to rate the accuracy of randomly sampled news headlines.

“Our treatment translates directly into a suite of real-world interventions that social media companies could easily deploy by periodically asking users to rate the accuracy of randomly sampled headlines,” the authors wrote in the paper.

To come to their conclusions, the researchers conducted two online experiments on a total of about 1,700 U.S. participants, who reflected the age, gender, ethnicity and geographic region diversities present in the country.

The first experiment included 853 participants and used 15 true and 15 false news headlines about COVID-19 in the style of Facebook posts, with a headline, photo and initial sentence.

The participants were split up into two groups. The first group was asked if they thought the headlines were accurate, and the second group was not asked about accuracy but instead about if they would consider sharing the posts on platforms such as Facebook and Twitter.

The first group correctly judged accuracy about two-thirds of the time.

For the second group, though, accuracy didn’t seem to play a big role on how likely the posts were to be shared. The participants in the second group shared about half of the true stories and just under half of the false stories, so “their judgment about which stories to share was almost random in regard to accuracy,” according to the news release.

The second experiment, which included 856 other participants, used the same group of headlines and also split participants into two groups.

The first group was simply asked to look at the headlines and decide whether or not they would share them on social media.

In fact, the “discernment” score of the second group, which is “the gap between the number of accurate and inaccurate stories they share,” was nearly three times larger than that of the first group.

The researchers also evaluated other factors that might impact the participants’ response tendencies. They gave every participant a six-item Cognitive Reflection Test (CRT), evaluated how much scientific knowledge each participant had and considered whether the participants were located close to COVID-19 outbreaks, among other things. Overall, they noticed that those who scored higher on the CRT and had vaster knowledge about science-rated headlines more accurately and shared fewer false headlines.

The researchers interpret these findings to suggest that the way people assess news stories has more to do with broader cognitive habits and less to do with political partisanship.

“A lot of people have a very cynical take on social media and our moment in history, that we’re post-truth and no one cares about the truth any more,” Gordon Pennycook, a co-author of the study and assistant professor of behavioral science at the University of Regina, said in the release. “Our evidence suggests it’s not that people don’t care; it’s more that they’re distracted.”

Unfortunately, the life-and-death stakes attached to COVID-19 don’t make people suddenly put more effort into determining accuracy before sharing articles, Jackson G. Lu, a co-author of the study and the Mitsui Career Development Assistant Professor at MIT Sloan School of Management and the Department of Brain and Cognitive Sciences, noted in the release.

And Rand added that he believes the severity of COVID-19 might interfere with readers’ ability to analyze news about it.

“Part of the issue with health and this pandemic is that it’s very anxiety-inducing,” Rand said in the release. “Being emotionally aroused is another thing that makes you less likely to stop and think carefully.”