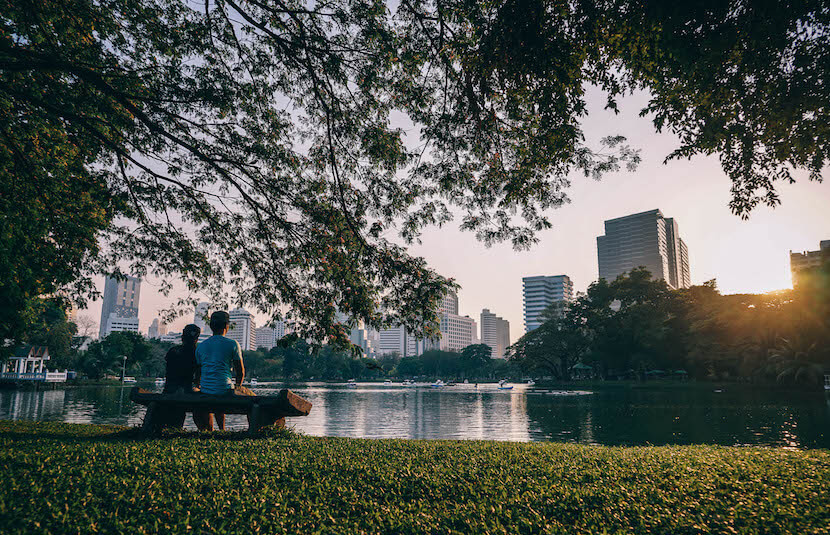 A team of researchers led by King’s College London, UK, has found that exposure to nature in cities increases the levels of a person’s mental wellbeing. In the study, the researchers used a smartphone app they developed to measure a person’s experience of city living in the moment.

The study is published in BioScience.

Researchers are now looking to find a set of hard data supporting which specific features of urban living lead city dwellers to a higher risk of developing mental disorders.

“At present we know very little about the mechanisms that underlie this effect; for example, we do not know which aspects of the urban environment increase risk of illness,” said Dr. Andrea Mechelli, one of the study’s lead researchers and a PhD candidate at the Institute of Psychiatry, Psychology and Neuroscience at King’s College London.

To address this gap in the study, the researchers developed Urban Mind, a smartphone-based app that examines how exposure to natural features in cities affects a person’s mental wellbeing.

“The motivation for developing the Urban Mind app is to try and understand the interplay between urban living and mental illness,” Mechelli said.

Urban Mind monitored 108 users who collectively completed 3,013 assessments over a one-week period. GPS-based geotagging was used to monitor their exact location. In each assessment, users answered several questions about their current environment and momentary mental wellbeing.

Questions referring to the physical features of urban environment run along the lines of:

Q: Is there a comfortable place to sit?

Questions referring to the social features of urban environment include:

Q: Do you feel the people around you share the same values as you?

Q: Do you feel safe here?

Q: Do you feel you have enough personal space right now?

“This study represents a successful example of how smartphone technologies can be employed as a tool for citizen science,” Michael Smythe, an artist and action-based researcher at Nomad Projects, said in a statement. “It also demonstrates the value of academic and non-academic researchers coming together to carry out truly cross-disciplinary work with tangible real-world implications.”

The programmers were also interested in whether the beneficial effects of nature might vary from one individual to another, depending on their risk of developing poor mental health.

To assess this, each user was rated on “trait impulsivity,” a psychological measure of one’s tendency to behave without considering appropriate consequences. Trait impulsivity is often used as a predictor of higher risk of developing unhealthy mental conditions, such as addictive disorders and antisocial personality disorders.

The results showed that higher exposure to nature was associated with higher levels of mental wellbeing. These associations were significant, immediate and time-lagged, which means the effects were still evident several hours after the exposure to trees, the sky and birdsong had taken place.

“Using the Urban Mind app made me more aware of my surroundings and how these affect my state of mind,” Lucia Robertson, an Urban Mind user, said in a statement. “It encouraged me to think hard about what kind of city I want to live in.”

Additionally, users with higher trait impulsivity, who are at greater risk of mental health issues, most effectively showed the beneficial effects of being in contact with nature.

“The interaction of this effect with trait impulsivity is intriguing, as it suggests that nature could be especially beneficial to those individuals who are at risk of poor mental health,” Mechelli said in a statement. “From a clinical perspective, we hope this line of research will lead to the development of low-cost scalable interventions aimed at promoting mental health in urban populations.”

No longer just a conventional wisdom

With Urban Mind, urban planning centered around the conventional saying that nature leads to mental wellbeing is now supported by a set of hard data.

“There is urgent need for such hard data, as decisions about urban planning and design are often based on ‘conventional wisdom’ due to lack of robust evidence base,” Mechelli said. “Our project will generate information on detrimental as well as beneficial aspects of the urban environment, as both are important for designing healthy cities.”

Johanna Gibbons and Neil Davidson, landscape architects at J & L Gibbons, said in a statement that they hope the study’s results will influence future investments and policies in terms of urban planning and design and help build healthier cities.

In the near future, researchers hope to address the limitations of the current version of Urban Mind.

For example, by recruiting more users from diverse demographic and socioeconomic backgrounds, they hope to address their current sample of very restricted group of users, smartphone users with higher than average level of education, and an average age of just 31.1 years.

Launching in March 2018, an updated version of the Urban Mind will include translations in multiple languages and be used for a large-scale international study in healthy participants and clinical populations.