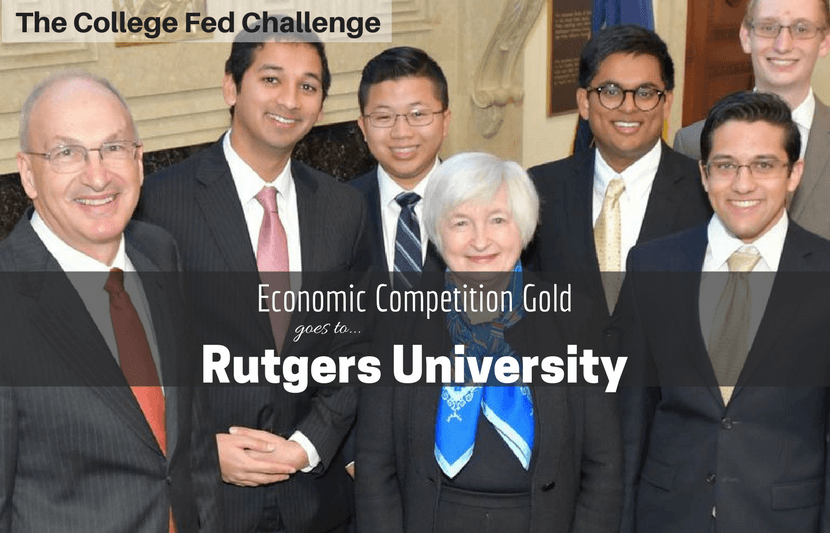 Every winter, as college football and basketball players are preparing to face off against each other on ESPN, other students are focusing on a very different sort of competition.

The only uniforms you’ll see them sporting are business suits. These teams may be small, consisting of 3-5 players, but they are mighty, as demonstrated by their fierce intellect and dedication to their field of study. This field is economics, and it would appear as though they are outstanding in it. Their stadium is an important bank.

The College Fed Challenge is a yearly three-day competition hosted by the Federal Reserve Bank of New York.

It is described as “an unforgettable experience in economic analysis, monetary policy decision-making, public speaking and teamwork.”

That certainly seems to be true.

The students competing are seeking real world economic experience and this challenge offers exactly that. Teams not only observe what central bankers do on a daily basis, but they step into their shoes and try their hand at the challenging monetary policymaking work that the bankers do. This involves making recommendations for a new monetary policy course and analyzing economic trends and conditions.

Aside from giving students great experience in the field, the competition also serves to help promote the discipline of economics as both a course of study and as a career for college students everywhere.

The competing teams face off after being placed in two divisions. These divisions are known as Liberty Street and Maiden Lane, and the placement of team depends on the economic courses the students on each team have taken.

The Fed helps student prepare by hosting orientation meetings as well as a bootcamp.

Students from any school in the Second District of the Federal Reserve may form a team and compete.

Competition is fierce, though. The 2016 competition saw 41 teams square off in the first round while only 11 advanced to the semi-finals.

The team had prepared extensively, almost memorizing their presentations, but no matter how hard they worked, they knew that there would be unexpected challenges ahead.

According to Bloomberg Businessweek, they had spent their entire Fall semester spending 15 hours every week reading economic news reports, extensive papers written by academics in the field, and the blog of Federal Reserve Chairman Ben Bernanke, never skipping its footnotes.

From the looks of it, all their hard work certainly paid off, resulting in an accomplishment that they can be proud of.