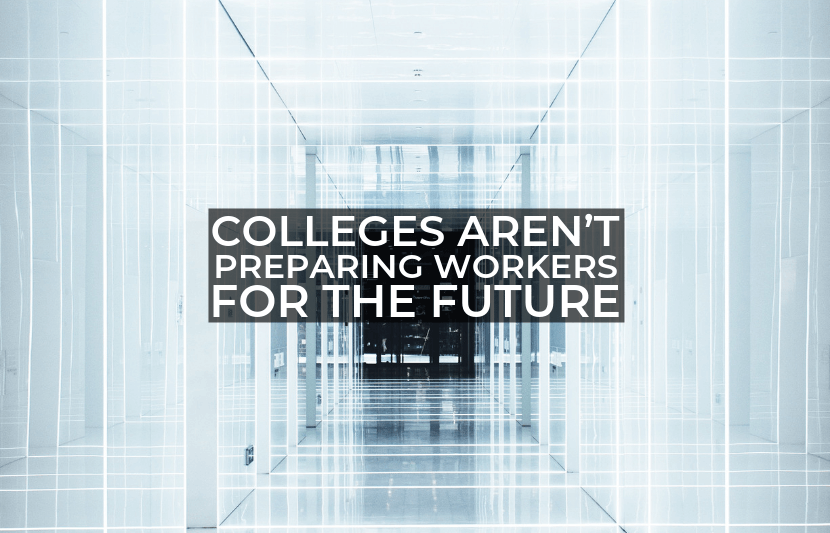 As artificial intelligence increasingly threatens employment, few people believe higher education is effectively preparing current or future workers for the workforce, according to a poll conducted by Gallup and Northeastern University.

The poll included the opinions of 10,000 adults living in the United States, the UK and Canada.

Overall, Americans proved to be the most pessimistic, with only 22 percent saying colleges and universities are doing a “good job preparing students for future jobs involving technology.” In comparison, 48 percent of Canadians and 38 percent of adults from the UK said the same.

And if someone needs more training in response to AI, they rarely consider going back to college. Specifically, only 26 percent of Americans, 32 percent of adults from the UK, and 38 percent of Canadians said they have considered doing so.

Instead, they prefer on-the-job training offered by an employer as a way to bring their education up to par if AI renders their skills out-of-date.

“People like to learn in the way that they might interact with social media. They want short, bite-sized learning. They want learning that’s in the moment and now,” a chief human resources officer for a large UK financial services group told the authors of the report.

To prevent displacement by AI, workers need to be able to learn new skills quickly and efficiently at any point in their career. And traditional higher education programs, which typically take years to complete and come with high price tags, are not always conducive to this type of learning.

Some companies, such as IBM and Standard Chartered Bank, are already cutting out the need for higher education by training their employees on the spot.

Fifteen percent of IBM’s U.S. hires are now individuals without a four-year college degree, Diane Gherson, the company’s chief human resources officer, told the authors of the report. To train these workers, IBM launched apprenticeships in software development, blockchain, cybersecurity, and design, which are registered with the U.S. Department of Labor.

“We have had great experience with folks coming right out of high school and community college or from another occupation,” Gherson continued. “They have contemporary tech skills and come from diverse backgrounds. After their first year, they’re often outperforming people with college degrees.”

And at Standard Chartered Bank, traditionally, “entry into the organization meant you had to have a degree,” Tanuj Kapilashrami, the company’s group head of human resources, told the authors of the report.

But recently, that has changed “significantly.”

“We are creating opportunities for people without degrees to join the bank through internships, apprenticeship programs and work experiences,” Kapilashrami continued.

Clearly, companies and individuals are beginning to rethink the value of four-year colleges and universities. According to the report, only 35 percent of Americans, 26 percent of adults from the UK, and 46 percent of Canadians believe a degree from a college or university is more valuable now than it was a decade ago.

So in these times of trouble, higher education institutions need to adapt.

According to the authors, “Partnering with governments and businesses to provide affordable, relevant, bite-sized, lifelong education to workers in all three countries could restore confidence, not just for higher education, but for the other institutions as well.”

Some partnerships have already emerged.

In January of 2018, Google created an eight-month-long online certificate program to train individuals interested in IT support roles. And in September, Northeastern and 25 community colleges signed on to offer the program.

And in a similar light, a greater Washington, D.C.-based group called the Capital CoLAB (Collaborative of Leaders in Academia and Business) recently emerged, in part, to increase the “quantity and quality” of digital-technology workers coming from undergraduate programs. University partners include George Mason University, Johns Hopkins University, Virginia Tech, and others. Corporate members include Capital One, JP Morgan Chase & Co., Medimmune, and more.