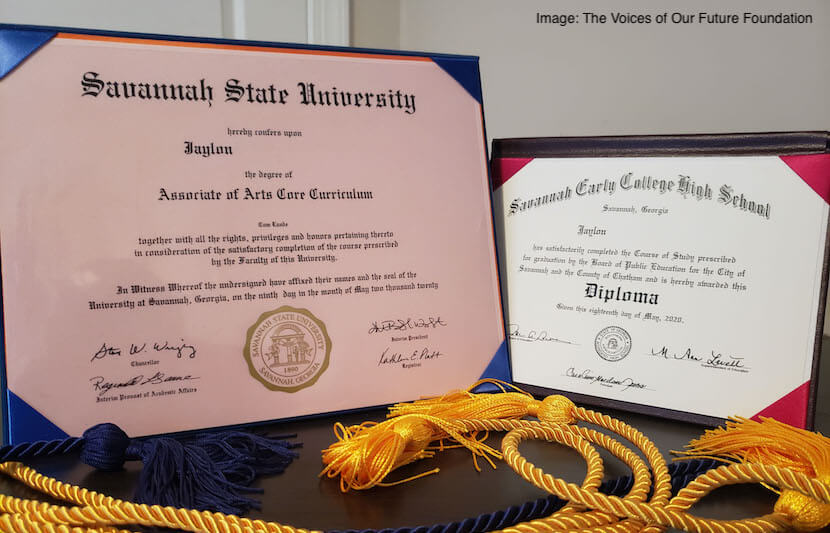 A group of grassroots activists in Savannah, Georgia, is raising awareness of a bill signed into law by Gov. Brian Kemp that upended the state’s popular Dual Enrollment program, which allows high school students to earn college credits for free. The group is calling for elected Georgia officials to reinstate the program at its full capacity.

For years, Georgia’s Dual Enrollment program has served as a stepping stone to college for, primarily, underserved Black and Latinx youths. The way it is set up is, the state pays a fixed amount for tuition, fees and books so that public high school students can take college classes for free. In 2019, more than 50,000 students in Georgia participated in the program, many of whom were able to graduate from high school with an associate degree or 60 hours of college credit to apply towards a bachelor’s degree.

However, the new changes, which are outlined in House Bill 444, cap the number of free college credits that a high school student can earn at 30, the equivalent of one year of college. The new law also limits dual enrollment opportunities to high school juniors and seniors, with a few exceptions. Sophomores are allowed to take technical college courses, but they must have scored above a 1,200 on the SAT or a 26 on the ACT to take core academic courses like English, math, science, social studies and foreign language.

“What they took away from the youth here was an opportunity to earn an associate degree before graduating from high school,” said Tim Salley, president of The Voices of Our Future Foundation, a nonprofit group calling for the program’s reinstatement.

“It was a really lucrative thing,” Salley added. “It was a promising thing. It was something that we were really taking advantage of, and it came to an abrupt halt.”

While these changes affect all public high school students in Georgia, those most impacted are students who attend one of Georgia’s 10 Early Colleges, whose goal is to familiarize traditionally underserved students with higher education by prioritizing and taking full advantage of Georgia’s Dual Enrollment program.

Many of Georgia’s Early Colleges lack sports teams, pep rallies and other staples of the quintessential high school experience. The students who opt to attend Early Colleges do so for the opportunity to earn college credits and degrees without having to pay for them.

“I am sacrificing traditional high school experiences,” explained a junior attending Savannah Early College Academy. “I have made the conscious decision to sacrifice football games, basketball games, homecoming, and many other things that I would have loved to enjoy just to find out, a year later, that I am being robbed of an opportunity.”

Georgia has operated its Dual Enrollment program in various forms since the early 1990s. The program was significantly revamped in 2016, largely because the state was trailing most of the country in student dual enrollment participation rates.

Following the revamp, more and more students began to participate in the program. As a result, the cost of the program increased significantly from $49 million in 2016 to $105 million in 2019. The program was expected to cost about $123 million for the fiscal year 2021. House Bill 444, however, is predicted to keep the program’s costs around $100.8 million, according to the Georgia Budget and Policy Institute.

Because of the new changes, students’ parents will have to foot the bill if students want to take more than 30 credit hours. For many students, that means that a college degree is no longer an option.

“Students feel defeated,” said Salley. “You have to understand the backstory. This was an out for young men and women to rise above (poverty). It is the saddest thing ever. I would have much rather they not introduce this program to these kids than give it to them and snatch it away from them mid-stride. They’re crushing a lot of dreams. They’re killing a community.”

Salley and his fellow members of The Voices of Our Future Foundation have sent emails and written letters to local politicians, members of the Georgia Board of Education and even Gov. Kemp asking that they reconsider the budget cuts. However, they have yet to receive a response.

“I turn on the 6:00 p.m. news and see the crime, the healthcare disparities and social inequalities,” said Salley. “Where does the priority in fixing these issues fall? If you, in the middle of all of this going on, take away from a program as promising as the Early College program, how do you explain that? How do you justify that?”

There are widely known correlations between access to education and quality of life. Education leads to financial and emotional stability, which helps to limit crime and inequalities present in a community.

For many Georgia high schoolers, particularly Black and Latinx students, the Dual Enrollment program was a ticket to increased financial and emotional security. Now, those opportunities are being curtailed.

“I worked hard throughout middle school to have the special honor of being able to attend Savannah Early College,” a freshman wrote in a letter sent to state politicians.

“I wanted to attend this school so that I could move towards my dreams at a faster rate,” the student added. “But, because of House Bill 444, my dreams have been cut in half. This bill has ruined my dream of getting my associate degree before leaving high school and is leading my life down a more difficult path to my hopes and dreams. This bill has affected many people who wanted to start paving a way for their goals early.”