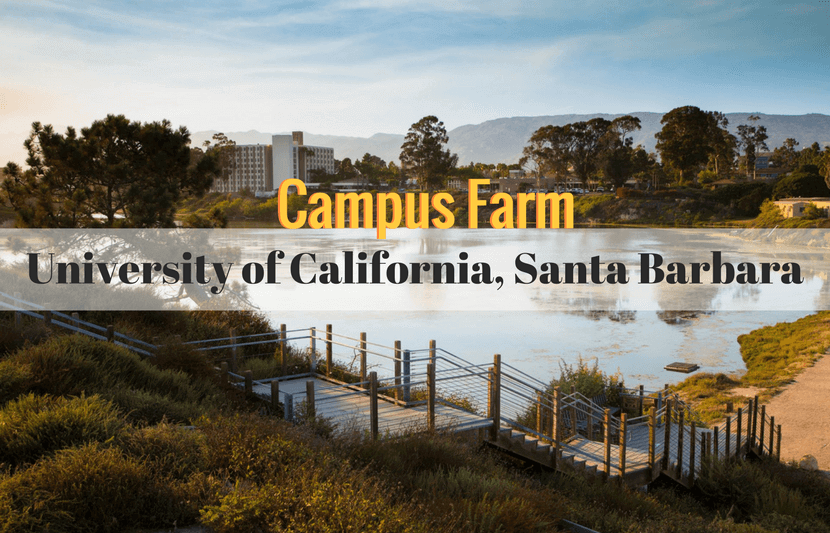 When we think of The University of California, Santa Barbra, we don’t typically picture anything to do with farming. Located on the sun-kissed coast of Southern California, this beautiful campus is known for everything from beach parties to beach volleyball tournaments. Indeed, fruit tree orchards and vegetable gardens seem to be about as far removed from the oceanside campus as you can get it. Recent reports, however, indicate that the university and its students are turning over a new leaf in more ways than one.

Anyone walking around the UCSB campus these days will likely notice an abundance of new orange trees that have recently been planted. Plans are well underway for the campus farm that sources indicate will officially open in the fall of 2017. It will have everything a traditional modern farm features, including “raised beds, fruit trees, trellis structures, and hydroponic vertical gardens,” and a large pergola. This project is the baby of the Associated Students Food Bank and the Department of Public Worms, who have teamed up with the goal of helping the campus create a sustainable food production system as well as cut down on its collective waste. This type of system has been described as a “closed loop cycle” by those leading the movement. Above all, though, this campus farm will provide students a hands on opportunity to learn the principles of modern farming and sustainable food production.

The learning opportunities will not be exclusive to the students of the university, though. When the farm officially opens to the public, it will be complete with special learning areas where children of the university’s faculty, staff, and students will be able to visit and participate in farming and sustainability related activities. Other students, though, will be able to take part in lectures and workshops given by experts from outside the university who will be instructing them on topics related farming, sustainability, and other areas of agriculture.

UCSB officials first began taking notice of their campus’ need for a sustainable food system when it was brought to their attention that more and more students were giving up meals and other food related expenses in order to subsidize the ever rising costs of text books and tuition. The Department of Public Worms, who had long been pushing for colleges to grow food on their campuses, was in a perfect position to help. The movement also caught the eye of alumni couple Jack and Kim Johnson, who made it possible for the committee to start planing citrus trees on the campus. Citrus trees were the first food producing plant to be debuted on the campus and there are plans to spread them all over’s grounds. If all goes according to plan, these trees will produce up to 400-600 lbs of fruit each year when fully grown.

The Edible Campus Project, as it has come to be known, has gained an impressive following through the campus and community and has been met with resounding support. Last May, the Green Initiative Fund awarded the project $38,000, wanting to see students enlightened in matters relating to agricultural technology and techniques and sustainability resources. When the project was first designed, those in charge envisioned that it would produce 12,000 lbs of food each year for the Food Bank, but with the ever growing support and resources of the campus and community, there is reason to believe that it is now possible for the campus farm to produce up to 25,000 every year. This garden is certainly growing in more ways than one.

University students seem quite happy with this new development on their campus, and who can blame them? Growing their own healthy food seems like a wonderful alternative to giving up meals in order to buy textbooks and if they are able to learn a valuable new skill in the process, so much the better. It is wonderful to see fellow millennials taking an interest in the sustainability movement that is so vital to the changing world around us, as it helps us produce great, healthy food, thus enabling us to take of both our bodies and our planet. Let us all hope that the movement started by the Edible Campus Project continues to spread and reaches other campuses across the country.