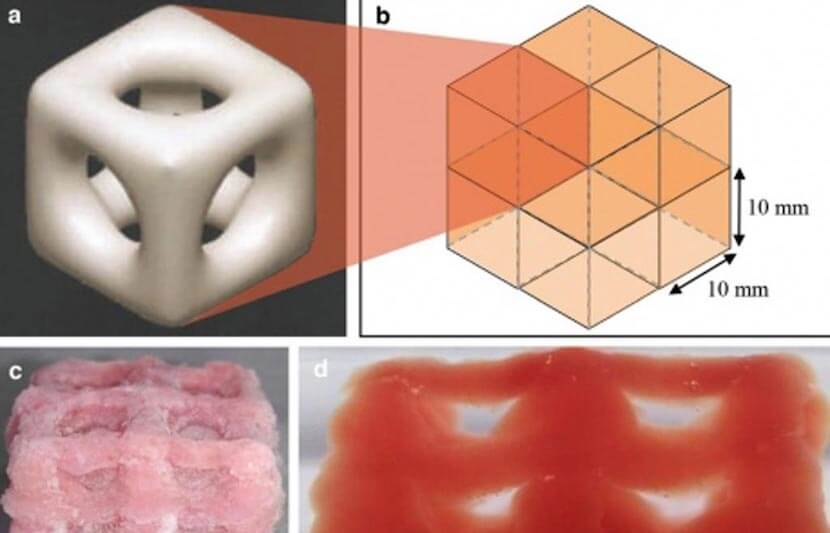 A team of researchers from Imperial College London and King’s College London has developed a new technique for creating 3D structures that can be used to replicate tissues and biological organs.

The study is published in Scientific Reports.

The 3D printing techniques allow for the construction of a particular organ structure layer-by-layer to form a cell scaffold, which is the key component to forming new viable tissues. Scaffolds act as a template for tissue regeneration, where damaged tissues are encouraged to regrow.

Currently, in clinics, organs that are flat, such as the skin, or hollow, such as the bladder, have been successfully printed and implemented. Scientists are working on ways to construct more complex organs, such as the brain and the heart.

The researchers in this study are the first to create 3D structures that are soft enough to replicate the mechanical properties of organs such as the brain and lungs.

“We needed to mimic the complex geometry of the brain and the best way to achieve an accurate geometry was to 3D print it,” said Zhengchu Tan, one of the lead researchers from the Department of Mechanical Engineering at Imperial College London.

“Thus, we developed the technique that can print stable, yet super soft when thawed, brain-like material.”

This technique uses a method called cryogenics (in other words, freezing), in which solid carbon dioxide (dry ice) is used to rapidly cool a hydrogel ink as it is extruded from a 3D printer. This instant cooling allows further layers to be built up on the previous layers, building a hydrogel matrix.

So, after being warmed up, unlike in similar techniques previously tested and failed, the gel form of hydrogel ink becomes as soft as body tissues, but doesn’t collapse under its own weight.

“It (3D structure) is able to hold its shape because cross-links have been created to form a hydrogel matrix that keeps the structure together,” Tan said. “However, it should be pointed out that since it is as soft as brain, it does deform under gravity just like brain does.”

The researchers tested the 3D-printed structures by seeding them with dermal fibroblast cells, which generate connective tissue in the skin, and found that there was successful attachment and survival.

“At the moment we have created structures a few centimetres in size, but ideally we’d like to create a replica of a whole organ using this technique,” Tan said in a statement.

With cryogenics, scientists can use these 3D structures to replace body tissues in medical procedures to form scaffolds. By “seeding” porous scaffolds with cells and encouraging them to grow, scientists can regenerate damaged tissues and allow the body to heal without having to face issues that typically affect tissue-replacing transplant procedures, such as rejection by the body.

This new technique could lead to further possibilities around the growth of stem cells, which is the key to medical revolution because of its ability to change into different types of cells.

Additionally, this technique could be used to create replica body parts or even entire organs. These could allow scientists to carry out types of experiments, which are not possible on live subjects. And these replica body parts and organs can be used to help with medical training by replacing the need to practice surgeries on animals.

According to Tan, the team is currently using cryogenics to print soft 3D structures, on which they can seed cells to study the effect of substrate stiffness on cell viability.

As part of the larger effort to develop a 3D structure of a brain, the team hopes to extend the printing size so as to print an entire brain.