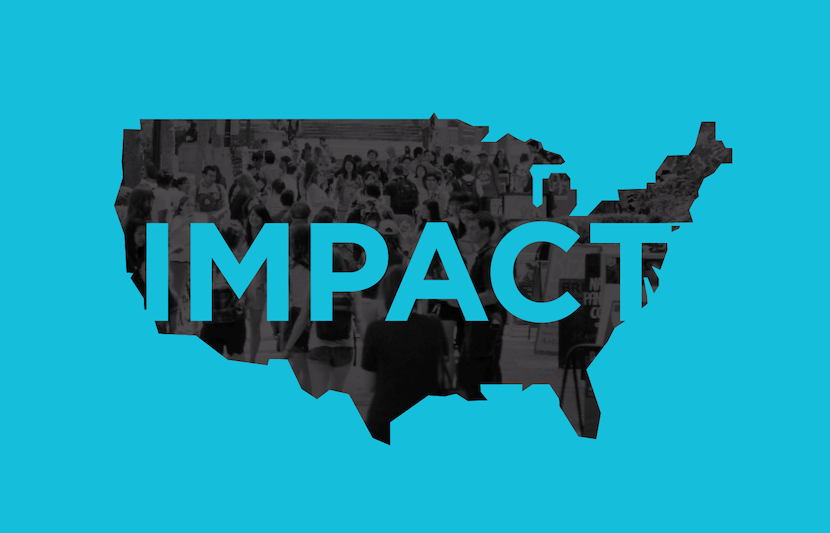 A nationwide alliance of more than 100 leading colleges and universities has covered significant ground in opening up opportunities for low- to moderate-income students, according to a report by the American Talent Initiative (ATI).

Since the 2015-16 school year, ATI members have sent 7,291 more students who receive Pell grants to the nation’s top colleges and universities. By 2025, the group plans to increase enrollment of low- and moderate-income students to 50,000.

ATI is a Bloomberg Philanthropies-supported collaboration between the Aspen Institute’s College Excellence Program, Ithaka S+R and 108 colleges and universities with graduation rates over 70 percent. It is also supported by the Gray Foundation.

Together, these organizations are putting less financially-fortunate students on track to earn a college degree.

“Thousands of talented, lower-income students are qualified to attend our country’s top colleges, but too many never get the chance,” Michael Bloomberg said in a statement. “We are changing that, because America is strongest when the doors of opportunity are open to all — no matter how much is in their bank account.”

Why the initiative is so important

Degrees in higher education pave the way for opportunity, and the evidence is clear.

On average, Americans with a bachelor’s degrees earn 66 percent more than those whose  education stopped after high school.

But it isn’t just about money. A higher education degree is a requirement for the majority of jobs.

Out of the 55 million job openings expected through 2020, only 36 percent of them can be earned with solely a high school diploma.

Although the government and academic institutions have already developed programs to help low-income students afford college, the aid isn’t enough.

Currently, more than half of the students enrolled in the college and universities with the highest graduation rates come from families in the top 20 percent of the national income distribution.

There is some truth to the old saying “you need money to make money,” and ATI is trying to change that.

ATI encourages higher education institutions to prioritize expanding opportunities to students who, otherwise, may not be able to attend college.

Since it started in December 2016, ATI has grown from 30 founding members to 108 diverse universities and colleges in 31 states across the country. This includes 79, private, not-for-profit institutions, 29 public institutions, including every member of the Ivy League, many flagship state universities and liberal arts colleges.

There is one caveat, however. To qualify for ATI, colleges and universities must have a six-year graduation rate at or above 70 percent.

This, presumably, is to ensure that students have a high success rate and a high probability to graduate from the college or university this program enables them to enroll in. A high graduation rate is also generally an indication of a top university.

To reach its goal of increasing enrollment of low- to moderate-income students to 50,000 by 2025, ATI plans to encourage the remaining 188 eligible institutions to hop on board.

This initiative has already been extremely successful.

Before ATI, however, many of the partner colleges and universities were struggling with Pell enrollment and, between 2012-13 and 2015-16, had experienced declines.

But the initiative reversed that downward trend.

Collaboration is the key, said Emily Schwartz, a senior analyst at Ithaka and co-author of the ATI report.

“ATI members recognize that they can make more progress toward meaningful, nationwide change by working collectively, and schools that infrequently partner – public and private, large and small – are coming together to share best practices and strategies to enroll and support more lower-income students,” she continued.

The report highlights five foundational strategies that ATI members have used to increase access and opportunity over the past two years.

These include “institutionalizing commitments to socioeconomic diversity through presidential leadership and board engagement, increasing the size of the student body, forging new pipelines for nontraditional students, prioritizing need-based financial aid, and reducing gaps in retention and graduation rates,” Schwartz said.

ATI relies on college and university presidents to develop and vocalize strategies, allocate funds and make the difficult decisions that ultimately expand opportunities for lower-income students.

Presidents are encouraged to prioritize commitments to socioeconomic diversity, and to lead board members, faculty, staff and students to do the same.

“At Princeton we believe in socioeconomic diversity because we know that to achieve excellence as a University and as a nation we must draw talent from every sector of society,” he said. “If we want to heal the divisions that inequality has produced in this country, we must ensure that students from low-income backgrounds receive the educations they need to develop their abilities and contribute to our society.”

Board members and trustees at some colleges and universities, such as Amherst College, have a history of prioritizing diversity. Amherst’s Board of Trustees first publicized its commitment to diversity in 1996. In January of 2018, the Board revamped its commitment to reflect “the broadest and deepest possible range of talents that people of all backgrounds can bring to us.”

One of the most effective ways to develop an economically diverse student body has been to increase total student enrollment.

Sixty-nine percent of the schools that were able to increase Pell enrollment over the past two years did so by increasing the size of the student body, according to the report.

While the study’s authors note that this enrollment strategy is more useful for public schools, some private members of ATI also have plans to employ it.

Yale University intends to increase undergraduate enrollment from 5,400 to 6,200 over the next four years. Over that time span, Yale plans to enroll an additional 225 Pell students, which should be easy, considering the university has already added 216 Pell students since 2015-16.

In addition, ATI has also made it a priority to create new pipelines for “nontraditional” student populations.

At the high school level, Rutgers University, for example, has developed a Future Scholars program in which over 2,000 New Jersey high school students, who receive free- or reduced-price lunch and would be first-generation college students, receive academic preparation courses, tutoring, mentoring and more.

Since the 2012-13 school year, UC Irvine has added 2,323 Pell students, which is more than any other college or university partnering with ATI. And nearly half of the Pell students at UC Irvine enrolled as transfer students.

Considering the bar set by UC Irvine, many of ATI’s college and university partners plan to put more of a priority into enrolling community college transfer students.

To achieve the 50,000-by-2025 goal, college and universities also need to focus on developing pipelines for veterans.

ATI members also have plans to address the problem at the source. According to the report, in recent years, college tuition prices have outpaced inflation, making it increasingly difficult for low-income students to afford a degree.

Some universities have made it a priority to reduce the cost of attendance for students who can’t afford it. Williams College, for example, plans to raise and allocate $150 million towards admission and financial aid for lower-income students, according to the report. Ohio State is set to raise an ambitious $100 million by 2020 to increase opportunity for students from low- and moderate-income families.

And, despite North Carolina’s government reducing per-student state funding, UNC Chapel Hill was able to reduce average net price for lower-income students from $6,750 to $4,920 between 2012-13 and 2015-16, according to the report.

Lastly, ATI encourages members to focus on retaining students and making sure they graduate.

Some member schools, including the University of Dayton, UNC Chapel Hill and Wake Forest University have developed plans to raise graduation rates by 10 or more percentage points.

At Spelman College, a historically black all-women’s college, 48 percent of students receive Pell grants, and 77 percent graduate within 6 years, according to the report.

At 48 percent, Spelman enrolls more students on Pell grants than any other private university in ATI.

“Spelman has consistently educated large percentages of Pell students for a long time,” Mary Schmidt Campbell, the president of Spelman, said in a statement at an ATI presidential summit that is quoted in the report.

“Our goal now is to make it possible for every enrolled student to graduate and to graduate with a competitive edge,” she continued. “We are making our goal a whole college effort that gives everyone on campus a role in developing student success and college completion strategies and the possibility of a lifetime of productive work for each graduating senior.”

What can students do?

As institutions make strides to expand opportunity for those from lower-income families, students also have a responsibility to speak up.

“Speaking out about the importance of socioeconomic diversity on campus can remind administrators that this issue is important,” she continued. “Students can share insights about the needs of students and can connect with prospective applicants for support, having recently gone through the admissions process.”

Peer support is essential, and it can make students feel safe and secure throughout the college process.

“Colleges and universities are deeply committed to increasing socioeconomic diversity, but there is certainly more work to be done to increase access and success for the many high-achieving, lower-income students across the country,” Schwartz said. “Student engagement can help bring ATI closer to its goal.”