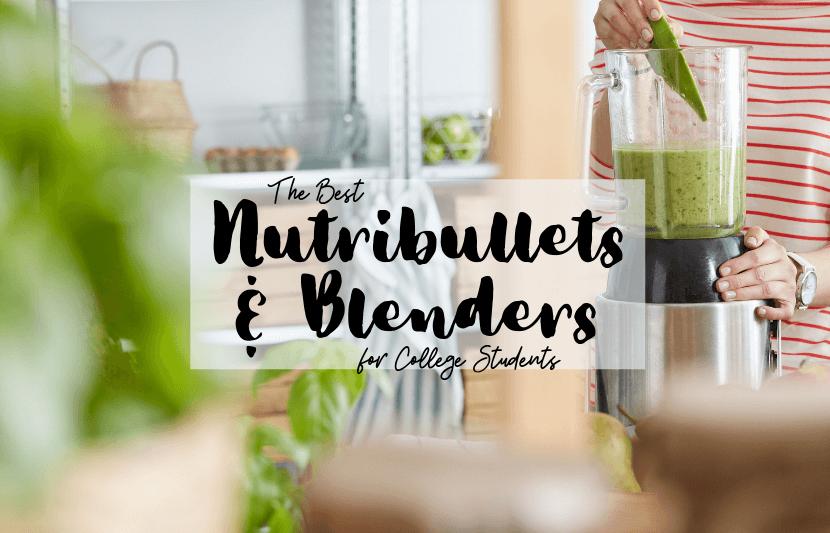 There are some things you would never think to bring to college until you do, at which point you question how you had ever gone without one. A NutriBullet is one of those things. We’ve all seen them in daytime TV infomercials and on the shelf at Walmart. Maybe you’ve even used one before to make a sick protein shake. They’re everywhere, but they aren’t one of those items you’ll see on back-to-school checklists. Yet NutriBullets, as well as other brands of personal blenders, are a very handy appliance for any college student living in a dorm or an apartment. Personal blenders can be used to make smoothies, purees, homemade peanut butter, sorbet, soup, salad dressing, and so much more.

If you want a personal blender to bring to college but are struggling to choose which brand and model to opt for, we at TUN have put together a helpful buying guide catered specifically to college students, so you can choose the model and make that works best for you. We’ll cover the most popular personal blender models, including our favorite NutriBullet models, the Nutri Ninja, and others.

Things to Consider When Shopping for NutriBullets And Personal Blenders

A personal blender should be a pretty easy purchase, but there are still a few considerations you’ll want to take into account before you put the money down.

When most people think personal blenders, they think smoothies. While they are undoubtedly typically used to make smoothies, many personal blenders can be used for much more. Some even dice veggies to be used in salads or other meals. If you just want a smoothie-maker, don’t fret about extra features. But if you’re looking for a multi-faceted kitchen appliance, look for a personal blender with variable blade attachments or multiple speeds.

As a rule of thumb, more power means a better, thicker smoothie and a more versatile blender. But more power typically also means more money and a bigger appliance. The best blenders have 600 watts or more, which will easily blend anything you need in moments, including thicker recipes such as nut butter. With under 600 watts, you can make smoothies, but you may have to add more liquid, which will result in a thinner smoothie. The minimum for making any kind of smoothie is 250 watts. With a 100-watt blender, you’ll be able to make juices, but that’s about it.

Whether you’re living in an off-campus apartment or a dorm room, space isn’t always easy to come by in college. Most people will want to look for something compact and simple, without too many different parts that take up much-needed space.

Durability is a key consideration with any appliance. A personal blender should last you years, so look for a product from a well-known manufacturer with a good reputation for quality control. Try to get a product with a warranty that lasts at least six months, so that if anything goes wrong or you happen to receive a faulty product you’ll be able to get your money back.

Price is always a major consideration, especially when you’re on a tight college budget. High-end NutriBullets and personal blenders can cost over $100. While they might offer some flashy features and super-high blending power, we think that any blender that expensive is unnecessary for college living.

Our Favorite NutriBullet and Personal Blenders

The original NutriBullet is our favorite personal blender for most students. With 600 watts of power, it is capable of handling most ingredients you’ll throw at it. It’ll blend smoothies excellently, and can be used to make a number of more power-intensive recipes such as nut butter. It doesn’t have the power of the souped-up NutriBullet Pro 900 (described below), but it is a little smaller and cheaper, ultimately making it a more sensible option for students in our mind. The original Nutribullet comes with two blades — a blending blade and a milling blade that can be used to chop up nuts, grains, and herbs. While we don’t find the milling blade necessary for most users, its inclusion is a nice perk. It also comes with a pair of lids, a regular lip ring, and a handled lip ring.
Recommended for: The average student who is interested in juicing and making smoothies but isn’t a devotee just yet.

The NutriBullet Pro 900 is the first step up from the original NutriBullet. The wattage of the power base increases from 600 to 900. To the layman, this might sound like a minimal difference, but it actually does result in a better smoothie with fewer fruit chunks. The extra power also means that it can handle larger fruit chunks, meaning less prep time and effort. While the Pro 900 doesn’t come with a milling blade, it does come with a pair of flip top lids so you can drink straight out of the blender jar. All that for a still-affordable $80 price tag.
Recommended for: Juice and smoothie aficionados and workout pros who expect to be using their NutriBullet on a near-daily basis.

From the same manufacturer as the NutriBullet, the Magic Bullet is a cheaper and weaker machine. The Magic Bullet has a 250-watt motor that’s great for making dips like guacamole or salsa and capable of making light smoothies and juices. You shouldn’t expect it to replicate the performance of a NutriBullet, however. The motor is weak in comparison and will burn out if you try to overwork it. Still, it is a solid budget NutriBullet alternative.
Recommended for: Students looking for the classic NutriBullet design and function at a cheaper price.

If the Magic Bullet is our favorite budget NutriBullet alternative, the Nutri Ninja Pro is our favorite NutriBullet Pro 900 alternative. The Nutri Ninja Pro costs a little more than half the price of the NutriBullet Pro 900, but still delivers 900 watts of power. It produces a smoother blend than the original NutriBullet, but doesn’t handle heavy or fibrous ingredients like kale or large chunks of fruit quite as well as the Pro 900. The cheaper price comes at the expense of build quality. Nutri Ninjas have a reputation for being a little less durable than more expensive blenders. We recommend investing a small amount in a multi-year protection plan, so if anything goes wrong, you’ll be able to get a new one.

Recommended for: Students looking for hardcore blending power at a cheaper price.

This unique personal blender from Oster uses a travel sport bottle as its blender jar, so you can remove it and immediately have a convenient container for your smoothie or juice blend. Other blenders have similar features, but the 20 ounce BPA-free sport bottle that comes with the Oster is more portable and natural to hold. Compare, for example, the bulky to-go container that comes with the NutriBullet to Oster’s slim bottle, which fits easily in most car cup holders. It is super affordable as well (under $11.99 on Amazon). But it doesn’t come without drawbacks. Its build quality doesn’t match up to that of more expensive blenders, so it is more prone to break in a short period of time. Additionally, it has 400 watts of power, but only 250 watts of blending power. Still, that’s enough power to handle ice, frozen fruits, and soft foods with no problem.

Recommended for: Students on a budget who want a basic blender for light smoothies and juices to take on the go.

This compact personal blender from BZSeed is portable and rechargeable, so you can not only bring smoothies on the go, but actually make them on the go. The base charges via a standard USB port, so it can be charged easily via a car, laptop, or portable power bank. This portability makes it a handy tool for camping, road tripping or, say, going to a music festival. This is one of a number of portable, rechargeable blenders available through Amazon and other online retailers. BZSeed’s blender is our favorite because of the size and build-quality of the detachable glass blender jar. It also comes with a handy brush for cleaning. However, it is not very powerful and is mostly suited for making juices and light smoothies from frozen fruits and crushed ice.

Recommended for: Frequent travelers who want a secondary blender or something small to bring on camping and road trips.