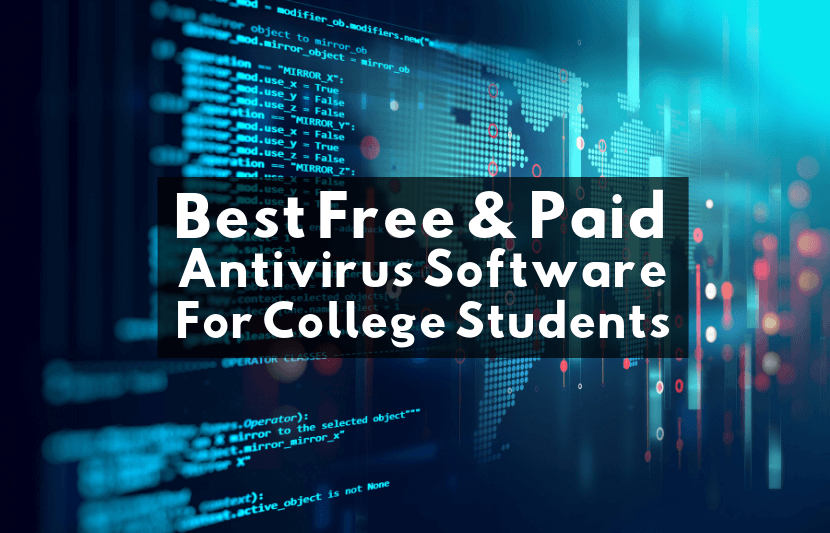 Anybody who owns a PC should think long and hard about getting antivirus protection. That includes you too, Mac owners. Though Macs have fewer vulnerabilities and are targeted less frequently than PCs, they are still at risk for infection by malware. A good antivirus software will help fight off viruses, Trojans, malware, and adware. If you’re getting a new laptop for college (you can check out our laptop recommendations for students here), it’s something you’re definitely going to want to shield your computer and protect your private information.

What to Look for

What does it protect?

Scammers and hackers have been tirelessly working on new kinds of malware, such that traditional antivirus protection simply isn’t enough to fight off the most threatening kinds of malware. A thorough computer security system should be able to prevent all of the following threats:

That said, not everybody needs such thorough protection. The average person might need only a basic security package. Which brings us to the next point …

What kind of protection do you need?

When looking for computer security software, you’ll need to decide whether to go with a free version or if you need to invest in a paid package. Truthfully, a free program should offer enough protection for most people, as long as you avoid downloading untrustworthy files and stay away from suspicious websites. The best free packages offer accurate malware scans and are updated regularly.

Paid packages offer more comprehensive security protections and extra tools, all in one suite. They may include a variety of security features, like ransomware protection, a two-way firewall, an anti-spam filter, a file shredder, an anti-phishing tool, a VPN (Virtual Private Network), and more. Those features are excellent, but are they necessary? If you’re running a small business or are a risky browser, then yes, you probably should invest in some extra security. If not, then you may not need it, but remember, there’s no such thing as being too prepared.

The standard antivirus software includes a malware detector that allows you to run a full scan of your computer. This is typically what you will get in a free antivirus package. But if you’re particularly concerned about computer security, you’ll want to get more than just antivirus scans. If you’re willing to invest in a paid package, you can get a host of extra features to protect from all kinds of threats. Here’s a checklist of common features to look for:

Antivirus software is notorious for slowing down systems. However, over the years, antivirus software has advanced such that many operate with no noticeable impact on system performance. Look for an option known for having a minimal effect on CPU operation.

Kaspersky consistently grades as one of the best-performing security systems, and is capable of detecting 100% of malware. The most impressive aspect of Kaspersky’s software is the wealth of extra features included. For example, it comes with phishing protection, privacy protection features, a VPN service, a safe banking feature, a firewall, and more. All that, and it runs faster than many other programs. However, it should be noted that Kaspersky, a Russian company, has been accused of using its services to spy on its users for Russian intelligence services. There is no conclusive evidence that these accusations are true, but they still may encourage some users — particularly those who regularly deal with sensitive information, such as government workers and bankers — to look elsewhere.

If the Kaspersky spying accusations freak you out, Bitdefender is a just-as-capable alternative that offers most of the same services. The Bitdefender full-protection suite offers a host of protective services and fights off ransomware, webcam hacks, and phishing. Like Kaspersky, it comes with a safe banking feature, a password manager, and a limited VPN. Independent tests have also found that Bitdefender is capable of 100% malware detection. It is known for being a bit of a resource hog, however, and may slow down your CPU a little more than the alternatives. That’s a small price to pay for great protection.

Malwarebytes Premium is used in the tech community as the go-to malware fighter when all else fails. Tech support will often use it to clean out particularly tough malware when other programs prove unable to completely fight it off. With the premium edition, Malwarebytes offers real-time detection, automatic updates, and protection against adware and unwanted applications. It doesn’t, however, offer some of the extra features offered by software like Kaspersky or Bitdefender, even though they are similarly priced. Whereas those programs come with phishing protection and even a limited VPN, Malwarebytes is more stripped-down. It is also more efficient and less resource-demanding as a result. Its quick scans, which look only for active malware, take only moments. We believe that Malwarebytes offers a good barrier of protection for most users, though we recognize that some people might feel wary about paying for malware protection that doesn’t include features like phishing protection. If you opt for it, you should probably also add protective browser extensions to fight off threats online.

Avast Free Security is the cream of the crop when it comes to free antivirus software. Just as effective as many subscription antivirus programs are, Avast will perform full-system malware scans and comb through email threads, attachments, web pages, and downloads for malicious software. In security lab tests, it was able to detect 100% of Windows malware and 99.9% of malware targeting Macs. The free version doesn’t come with many of the features that paid programs, including Avast’s premium version, offer — things like a firewall, a ransomware shield, a WiFi inspector, and more. That said, the free version of Avast is pretty feature-rich. It comes equipped with web and email protection and a secure browser alongside the standard on-demand and real-time virus scan. In short, this free program offers enough protection for most people’s computer security needs.

Like its premium version, Malwarebytes Free is known for its ability to knock out hard-to-eliminate malware that snuck past your usual defenses. But it is also not a traditional antivirus software in that it doesn’t provide real-time protection. It is also designed to only pick up active malware, so it may bypass dormant or non-threatening malware. So as a primary form of antivirus protection, Malwarebytes Free isn’t really a viable option. However, it is still a useful tool if and when you do happen to get infected. Think of Malwarebytes as the hired gun of the antivirus world — the specialist mercenary you bring in when law enforcement has failed to deliver justice. Do you want it as your only line of defense? No. But it’s nice to have in your back pocket, just in case.

One of the best paid antivirus programs is also one of the best free ones. Bitdefender Antivirus Free essentially offers the antivirus detection section of the full version without the extra add-ons. If your main priority is effective antivirus scanning, look no further, as Bitdefender is among the most effective out there. Scans are quick and effective. Bitdefender claims a detection rate of 100%, and independent tests have found between 98% and 100% effectiveness. However, the free version doesn’t add much else, so if you’re looking for extra features, you’ll probably need to look elsewhere or consider paying for premium.