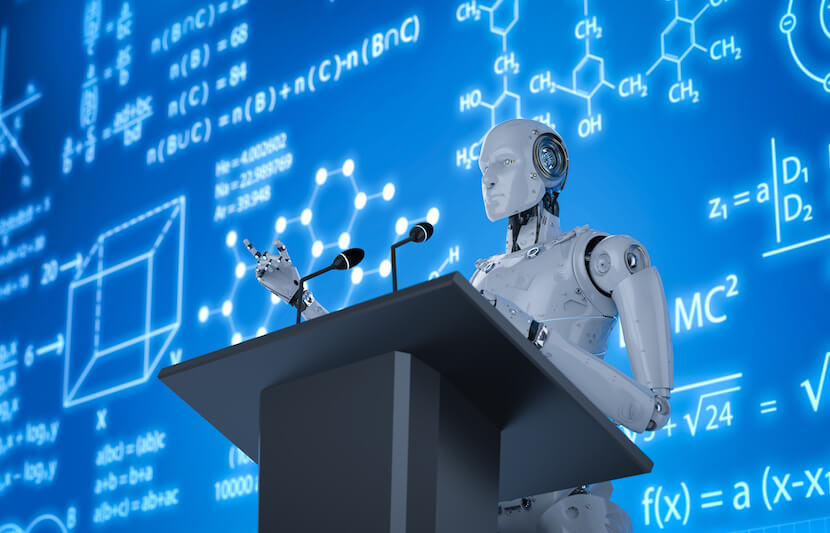 The number of robots around the world is increasing rapidly. And it’s said that automation will threatening more than 800m jobs worldwide by 2030. In the UK, it’s claimed robots will replace 3.6m workers by this date, which means one in five British jobs would be performed by an intelligent machine.

Artificial intelligence is set to have a significant impact. And not just on teaching and learning, but also on the whole student experience – innovation infused with traditional academic processes. This will change the classroom experience and how universities communicate with students, with lectures and marking potentially done by robots.

For academics, this rise in artificial intelligence, robotics and intelligent tutoring systems, may well mean that having the required experience and teaching skills are no longer enough. And the already apparent lack of digital skills among some academics may make it easier for universities to look to robots as an alternative.

“Yuki”, the first robot lecturer, was introduced in Germany in 2019 and has already started delivering lectures to university students at The Philipps University of Marburg. The robot acts as a teaching assistant during lectures. He can get a sense of how students are doing academically, and what kind of support they need. He can also have them take tests. Some students have found Yuki useful – despite the fact he still requires some significant improvements to be fully functional.

Robots, combined with artificial intelligence, are expected to improve teaching by providing greater levels of individualised learning, objective and timely grading, as well as having the ability to identify areas of improvements in degree programmes. This may very well leave less room for actual humans to carry out the job – and will no doubt have a major impact on the job description of academics in universities.

It may also mean that when the robots move in, conducting research and contributing to knowledge creation might be the only way for academics to sustain their jobs and increase the chances of employability, retention and career development.

Research of the future

According to the latest Research Futures report from Elsevier and Ipsos MORI, the research ecosystem will have significant changes in the future thanks to new technologies – in terms of open access publishing, funding opportunities and links to the technology industry. The report also suggests that Eastern countries such as China will have an increased focus on research and development.

The speed and volume of research will also change massively. Big data analytics and artificial intelligence will be able to present large amount of findings directly to researchers at a very fast pace. And it is predicted there will also be a move towards a more open system in terms of funding, data collection and publishing open access articles.

So for academics, it may well be that a move towards knowledge creation through research rather than teaching might be the best way for job sustainability in higher education in the near future. This could mean that for academics, it will become more important than ever to focus on research. And while this could free academics up to use their expertise for the benefit of society, it remains to be seen whether robots can inspire the next generation in the same way.

Nisreen Ameen, a lecturer in information technology management at Queen Mary University of London, previously published this article in The Conversation, a nonprofit news organization bringing knowledge from academia to the wider public. Articles are written by scholars who are experts on issues of public interest, assisted by editors who help unlock the knowledge.