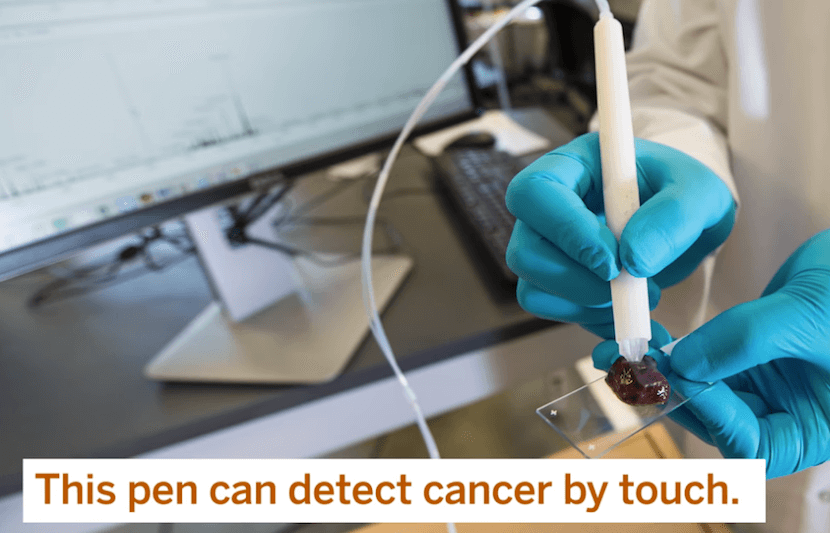 A team of scientists and engineers at The University of Texas (UT) at Austin has invented a pen device capable of accurately identifying cancerous tissue in just 10 seconds. The MasSpec Pen will help surgeons pinpoint cancerous tissue during surgery, so they know where to cut or preserve.

“One of the real problems in cancer surgery is establishing the margins of where to cut,” said Thomas Milner, project collaborator and professor of biomedical engineering at UT Austin. “They don’t want to remove too much tissue, but they want to make sure to get the cancer out. So, the implication of technology is that it can better establish the tumor margins for removal of cancer tissue.”

The research is published in Science Translational Medicine.

The current method for diagnosing cancer and identifying cancerous regions during surgery takes 30 minutes and is sometimes inaccurate.

“To make an absolute determination if a tissue is cancerous, the procedure is to take a small portion of the tissue, a biopsy, out of the region of interest and to send the tissue to the pathology lab where the tissue is processed, cut into pieces and put on slides,” Milner said.

This procedure increases the patient’s risk of infection and negative effects from anesthesia. For some types of cancer, this method has been proven inefficient and has shown unreliable results in 10 to 20 percent of cases.

In contrast, the MasSpec Pen takes just 10 seconds and has proven reliability. In 253 tests on human cancer patients, the pen quickly identified cancer with 96 percent accuracy.

The MacSpec Pen is also noninvasive. It works by simply touching the tip to the questioned tissue and pressing a foot pedal to send the molecular information gathered by the pen to be evaluated by software called a statistical classifier.

When the test is complete, the words “Normal” or “Cancer” will quickly appear on the computer screen. And for some cancers with varying types, such as lung cancer, the name of the subtype may also appear.

To train the software to process the tissue touched by the pen, the team gathered 253 human tissue samples. These samples include both healthy and cancerous tissue from infected breasts, lungs, thyroids, and ovaries.

Once the pen touches the tissue area, it releases a drop of water. Then, small molecules move from the tissue into the water. That water sample is driven into a device called a mass spectrometer, which generates a grouping of thousands of molecules called a molecular fingerprint. That fingerprint is then tested to specify the cancerous region.

“Because the metabolites in cancer and normal cells are so different, we extract and analyze them with the MasSpec Pen to obtain a molecular fingerprint of the tissue,” Livia Schiavinato Eberlin, assistant professor of chemistry at UT Austin and designer of the study, said in a statement. “What is incredible is that through this simple and gentle chemical process, the MasSpec Pen rapidly provides diagnostic molecular information without causing tissue damage.”

Cancer removal surgery is a delicate process. While it is crucial to remove all of the cancer, it can also be very harmful to the patient if too much healthy tissue is removed. In the case of breast cancer patients, for example, excess tissue removal can cause tremendous pain and possible nerve damage. For thyroid cancer patients, a removal of too much healthy tissue could result in loss of speech or the ability to regulate the body’s calcium levels, which are crucial for efficient muscle and nerve function.

It is natural therefore that the research group should take tissue damage into consideration in designing the pen device.

“When designing the MasSpec Pen, we made sure the tissue remains intact by coming into contact only with water and the plastic tip of the MasSpec Pen during the procedure,” Jialing Zhang, research associate at the Eberlin Lab at UT Austin, said in a statement. “The result is a biocompatible and automated medical device that we are so excited to translate to the clinic very soon.”

The MacSpec Pen, which is disposable, will vary in size and shape depending on the type of cancer, but Milner doesn’t see any major technical hurdles prohibiting mass production of the device.

The team and UT Austin have filed U.S. patent applications to protect their technology and are also looking to do the same around the world.