Physicians at the University of Calgary, Canada, in partnership with researchers at the Hotchkiss Brain Institute, have successfully performed nine brain surgeries on patients with essential tremor movement disorder without cutting the skin or drilling into the skull.

Using magnetic resonance guided focused ultrasound (MRgFUS) technology, the physicians are able to see the brain with real-time imaging and target a beam of high intensity ultrasound to the brain region responsible for tremor.

Focused ultrasound technology has been around for a few decades, though it has previously been unable to work through dense substances such as a skull.

In the past 10 years, new developments have been achieved to allow the technology to safely pass through bone and tissue to focus on a single point deep inside the brain, using very high power.

Physicians can now use the focused ultrasound inside an MRI to image patients and target specific areas of the brain. 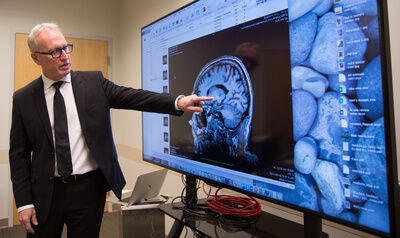 In the case of essential tremor, the most common movement disorder, the MRgFUS technology can be used to perform the same treatment as traditional, invasive surgery, but without breaking the skin.

“The conventional surgery that’s been done for quite a while now, called a Thalamotomy, targets a small area inside the thalamus,” said Pike. “The normal approach is to drill a hole in the skull and insert a probe that passes through the healthy brain tissue all the way down to the thalamus to ultimately heat and destroy the part of the thalamus that is affected. With the focused ultrasound we’re essentially doing the same procedure without having to drill a hole in the skull.”

Eighty-five-year-old Elias Pharaon volunteered to undergo treatment for his essential tremor with the MRgFUS technology, and is now able to write his name successfully for the first time in five years.

“I couldn’t believe the tremor in my right hand was gone,” Pharaon said in a statement. “I didn’t feel anything during the procedure. I was so happy. It’s changed my life. I feel like I can go out in public again.”

All of the nine patients treated so far have experienced success in dramatically reducing their essential tremor.

The research team believes the MRgFUS technology can be used for more than just treating this movement disorder.

The team believes that the technology’s use can be extended to treatment of Parkinson’s disease, dementia, epilepsy, and brain tumours.

“There are plans to extend to other conditions,” Pike said. “More generally, this focused ultrasound technology has additional application beyond just functional neurosurgery. There’s research going on looking at how it can be used to enhance drug delivery to brain tumors, for example.”