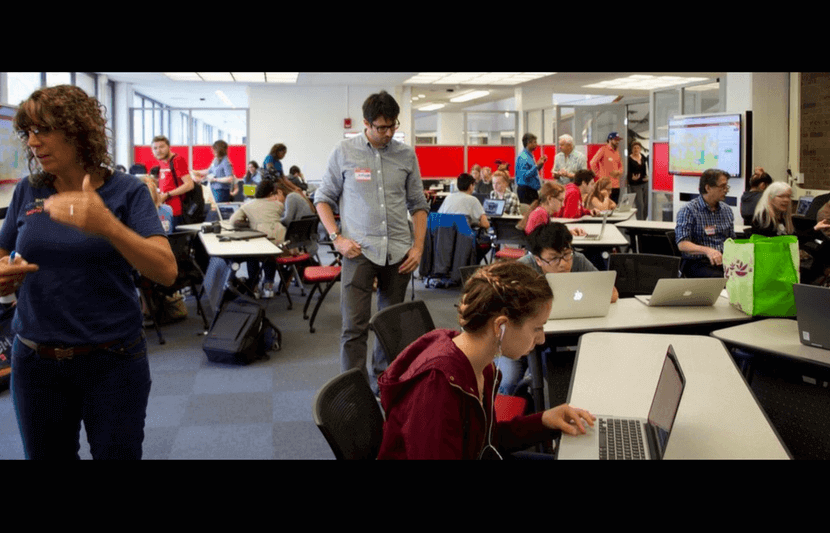 The library was abuzz with the sound of students tapping away on their laptops as they edited maps online.

Was this a class in cartography that filled the North Reading Room at Stony Brook University’s Frank Melville Jr. Memorial Library? No. It was a “Mapathon,” and similar mapathons have been taking place at universities across the U.S. in a collaborative effort to help recovery efforts in Puerto Rico.

Many places like Puerto Rico do not have accurately detailed maps. Sure, the main highways and high-traffic tourist areas have detailed maps, but the rural villages, where many people actually live, don’t make it to the map, and even when these areas do, the maps get updated infrequently and are often missing local roads and newly-erected structures.

Having up-to-date maps is crucial for rescue and recovery efforts. So, how do you get accurately detailed maps to the rescue workers quickly? With a large army of volunteers around the world working from their laptops, updating and validating the maps online while comparing recent satellite images. That’s how you heat up recovery efforts. And that is precisely what the Humanitarian OpenStreetMap Team (HOT) does.

HOT is a nonprofit organization based in Washington, D.C. HOT began its humanitarian crowdsourcing map-editing efforts during rescue efforts in Haiti after the devastating 2010 earthquake. Working from satellite images, the team began filling in the blank spaces where villages, buildings and roads existed but weren’t depicted on the avaliable online maps.

When a major disaster strikes, HOT rallies its network of volunteer “mappers” to create, edit and validate the maps that enable responders to reach those in need.

The volunteer mappers work with OpenStreetMap, an open-source mapping platform that is used by Four Square and others. It is also used by the American Red Cross, Doctors Without Borders and FEMA in Puerto Rico because they know that they have a team of volunteer mappers at universities, offices and living rooms around the world, updating the data from recent satellite images.

The baseline data for OpenStreetMap is collected from surveys, GPS devices, aerial photography, and other free sources. And because it is a crowd-sourced platform, volunteer mappers are constantly updating the maps to make them more accurate.

It’s getting HOT on campus

“Students have a strong desire to help out with the Puerto Rico Recovery efforts and these mapathons give them a concrete way to do so,” said Chris Sellers, professor of history at Stony Brook, in an interview with The University Network (TUN). Sellers further noted that “crowdsourcing humanitarian efforts like this afford students a meaningful outlet to help.”

Over 100 mappers at Stony Brook focused on the upper northeast corner of Puerto Rico, picking up where students at Columbia University left off last weekend. They focused on validating the earlier mappers’ efforts, as well as discovering new structures and roads that were yet to be mapped.

The mapathon at Stony Brook was very easy to initiate. Eric Beverley, associate professor of history at Stony Brook, had attended the Columbia mapathon effort over the past weekend. On Monday, he and Sellers pitched the idea of hosting a similar one at Stony Brook with administrators. Two days later, over 100 student and faculty mappers were busy helping recovery efforts 1,615 miles away in Puerto Rico.

“The efforts to map Puerto Rico are going great,” said Russell Deffner, co-lead of activation working group at HOT. “We have an average of about 250 mappers digitizing about 35,000 buildings every day. If we can keep up this rate, which is in large part thanks to all the mapathon organizers out there, we expect to have a complete buildings and roads dataset for the American Red Cross and FEMA sometime next week.”

How you can help

HOT is always looking for more mappers and has made the process very easy for universities to get involved. Students or faculty members interested in holding a mapathon at their university can get acquainted with HOT here. Because there are so many recent disasters, there is even a multiple disasters page that details each of the most recent disaster mapping projects and provides links to more information on their urgency and current progress.

A project’s priority can change quickly as needs arise, so mappers need to stay on top of the fluid situation. “The mapping goes so fast and sometimes priority shifts rapidly, the best bet is to start at tasks.hotosm.org and sort by priority; there are currently Urgent projects for Puerto Rico, Mexico and Bangladesh – all need crowd support to finish in order to get the data into the hands of first responders and aid organizations as quickly as possible,” said Deffner.

What if mapping in not your thing? You can still help. HOT has many other ways — from communications to fundraising — for you to get involved.