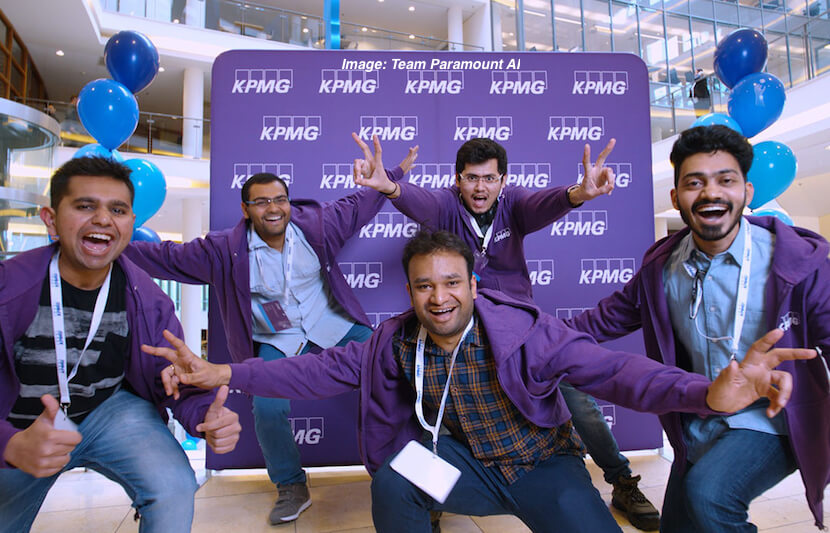 In a garbage-strewn wasteland that our earth has become, a rickety old machine goes around, hauls trash into its small square body, vibrates intensely, and plops the trash back out in a compacted form, shaped just like its own body.

Yes, I’m talking about Wall-E from the movie ”Wall-E,” and he is beyond adorable. But, knowing the setting of the movie, no one would want to live in a world where Wall-E, a trash compacting robot, is needed. That would mean our earth has become unlivable.

While we would never want the setting of “Wall-E” to be the reality, how about the robot Wall-E?

Team Paramount AI, made up of five graduate students from the University of Toronto, has an answer. The team — winner of this year’s KPMG Ideation Challenge — used artificial intelligence to develop RoboBin, a real-life Wall-E but with a different purpose.

Instead of having to crush a bunch of trash on a wasted earth, RoboBin helps users recycle properly by telling them where each trash belongs, fighting off rising landfills and recycling contamination while humans still have time on earth to save it.

“Our objective is to redefine the way one throws the waste. With this vision ahead, we felt that RoboBin is not a dream anymore but can be a viable reality,” team member Nikunj Viramgama told The University Network (TUN).

Urbanization, population growth and economic development all contribute to the global problem of rising waste generation.

According to research by Verisk Maplecroft, a global risk consulting firm, we, as a global community, generate over 2.1 billion tonnes (or 2.3 billion tons) of municipal solid waste (MSW), meaning everyday trash, every year. This single-year load is enough to fill 822,000 Olympic-size swimming pools, which would span 41,000 kilometers (25476 miles) if laid out end-to-end. But only 16 percent of this yearly load is recycled properly.

“When we analyzed the data, we realized that the problem was even bigger. Due to the recycling waste contamination, most of the waste winds up in the landfill,” said Viramgama.

The problem seems even more disproportionately bigger in our own backyard.

Of all the waste generated in the United States, Americans recycle only 35 percent of their MSW, leading to recycling contamination.

And there’s a cost to throwing trash away. In 2019, the average national cost of disposing of waste in a landfill is $55.36 per ton.

And this is where RoboBin comes in, using AI to solve the problem of rising landfills by segregating waste properly at the very source, a trash bin in your house or next to your local library.

Team Paramount AI’s idea started with an everyday dilemma that every team member experienced at one point of his life. Is the entire water bottle, including its cap, plastic? Do you have to wash plastic containers before throwing them into recycling?

How in the world do you recycle properly?

For those who have the same exact questions, here comes RoboBin to the rescue.

You place a piece of waste into RoboBin and push a button. RoboBin scans the item, cross-references it with a library of over 35,000 images of waste, varying from garbage, recyclables and organics, and finally determines in which bin the item belongs.

“So what it is doing is basically analyzing each and every pixel separately and then [RoboBin] finds out what’s the best description for the content,” team member Vaibhav Gupta told CBC News.

To save the cost of setting up, the team built RoboBin as an accessory that you can simply put on top of public waste bins that already exist.

“We were adamant about making something that saves time, cuts cost, improves the environment and builds better communities with a real visible commitment to sustainability,” Viramgama told TUN.

As they plowed through building a prototype for their idea, there were problems.

First, since RoboBin needed to be an accessory to already existing public trash bins, the device needed to withstand the elements of varying nature and human abuse.

“The system needs to be very robust and reliable, as any major downtimes would defeat the purpose of the bin altogether,” said Viramgama.

Second, since the kinds of waste thrown out in every city or region vary, RoboBin needed to be trained with a highly comprehensive library of images of different types of trash.

After winning the KPMG challenge, the team has further improved their model by adding more options, such as compactors, solar panel power source, and IoT-based sensors for condition-based monitoring on their prospective clients’ requirements.

An idea with legs

For team Paramount AI, the best way to overcome the challenges blocking their creative idea was to be practical.

Before pitching their idea at the KPMG challenge, the students conducted a thorough research of the current waste management market, collected a comprehensive list of publications and press lists, and found the most feasible business model.

For example, in their final presentation, they used the amount of waste generated in an actual theme park as a micro version of how and where in real life they would apply RoboBin.

“This team in particular brought to life the business case for their idea … This idea has legs. They’re in discussions with some organizations about taking it further,” Anthony Coops, KPMG partner and Ideation Challenge judge, told CBC News.

The students are planning to test out RoboBin in their local neighborhood first.

“Our initial step would be to launch RoboBin in a local scale in our neighbourhood in order to gain consumer feedback, user experience data and test the feasibility and scalability,” said Viramgama.

With the results and appropriate upgrades, they will then pitch the idea to the city of Toronto.

After launching with the city of Toronto, they are hoping to expand gradually into the private sector, such as theme parks, restaurants, airports and business spaces.

Setting all their accomplishments aside, the students’ biggest goal is to hone the future of AI in an ethical, multicultural and unbiased way to solve global problems.

Despite a common belief, boosted with media scare, of technology advancing at the cost of loss of ethics and invasion of privacy, the students hope RoboBin can show the world how AI, when put into good use, can be ethical.

For example, they programmed RoboBin to capture only an image of the object that is thrown in a trash bin but not the image of the person throwing the object in the bin.

“With the development of technology, people think that it comes with the cost of increase in bias and loss of ethics. That is not true always,” said Viramgama. “In our product, we also considered ethics while we designed the AI solution for waste segregation.”