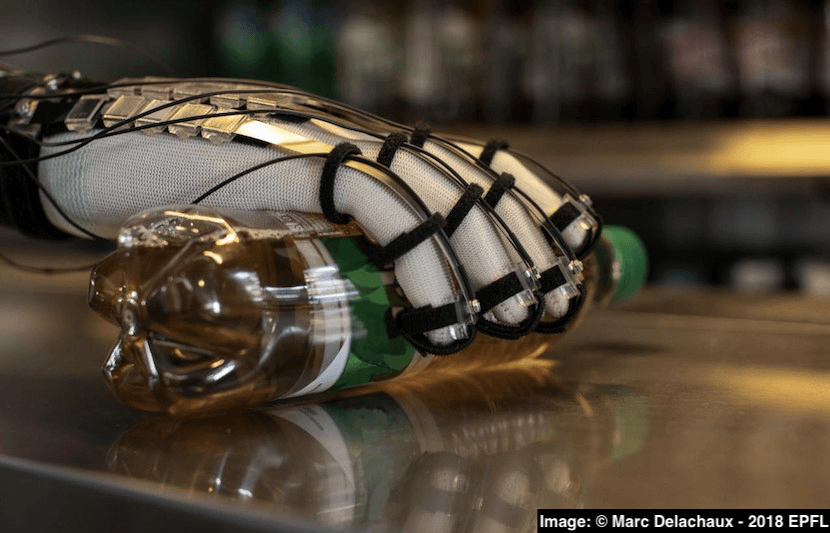 Researchers from the Swiss Federal Institute of Technology in Lausanne (EPFL) and ETH Zurich have jointly developed a lightweight haptic glove that allows users to touch, feel and manipulate objects in virtual reality as if they were actually there.

The glove, named DextrES by the researchers, recreates a highly realistic sensation of touch, and can be programmed to simulate both hard objects, like a wooden desk, and soft objects, like a sponge.

“We wanted to develop a lightweight device that — unlike existing virtual-reality gloves — doesn’t require a bulky exoskeleton, pumps or very thick cables,” Herbert Shea, a full professor at EPFL who heads its Soft Transducers Laboratory, said in a statement.

The glove weighs under 8 grams per finger, making it far lighter than existing technology.

It also requires only 200 Volts and a few milliWatts of electricity to generate up to 40 Newtons of holding force on each finger.

Add to that the potential for use with a small battery and its slim dimension — only 2 millimetres thick — and the glove will allow for higher precision and greater freedom of movement.

The glove is composed of nylon, with flexible, electrically-charged metal strips running over the fingers and a thin electrical insulator between them.

To simulate a virtual object, a voltage difference is applied to the metal strips, which causes them to stick together, which in turn restricts users from moving their fingers past a certain point. This braking force creates a highly realistic sensation of touch.

When the voltage is removed, the metal strips once again move freely, allowing users to move their fingers with no resistance.

DextrES allows users to interact with a virtual environment. In tests of the technology, users were asked to perform virtual reality manipulation and grasping tasks. The participants moved objects around the virtual environment with ease and precision.

“Users reported feeling very accurate sensations of touching objects and were very accurate in the tasks they were assigned,” Shea said in a short video describing the technology.

While the glove currently is powered by a thin electrical cable, its lower power requirement means that it could be powered by a small battery in the future, making the gloves highly portable.

“The system’s low power requirement is due to the fact that it doesn’t create a movement, but blocks one,” Shea said in a statement.

In contrast, existing virtual reality glove technology often requires a complex system of wires and pumps to recreate the sensation of touch.

More tests need to be conducted to ensure users have a realistic experience, according to the researchers.

Otmar Hilliges, an assistant professor of computer science at ETH Zurich who heads its Advanced Interactive Technologies Lab, emphasized the challenges of trying to simulate something as complex as the human sense of touch.

“The human sensory system is highly developed and highly complex,” he said in a statement. “We have many different kinds of receptors at a very high density in the joints of our fingers and embedded in the skin.”

“As a result, rendering realistic feedback when interacting with virtual objects is a very demanding problem and is currently unsolved. Our work goes one step in this direction, focusing particularly on kinesthetic feedback,” he continued.

The researchers plan on ultimately developing a full body suit using this technology.

“With further improvements, we plan eventually to develop a complete suit for virtual reality environments,” Shea said in the video.

Scaled up, a full body suit could be used to create games in which a user can navigate a full virtual environment.

In a statement, Shea suggested that there are many other uses that one can envision. It could be used to help train surgeons by creating a realistic and reactive simulation of surgery. It could likewise be used in augmented reality.