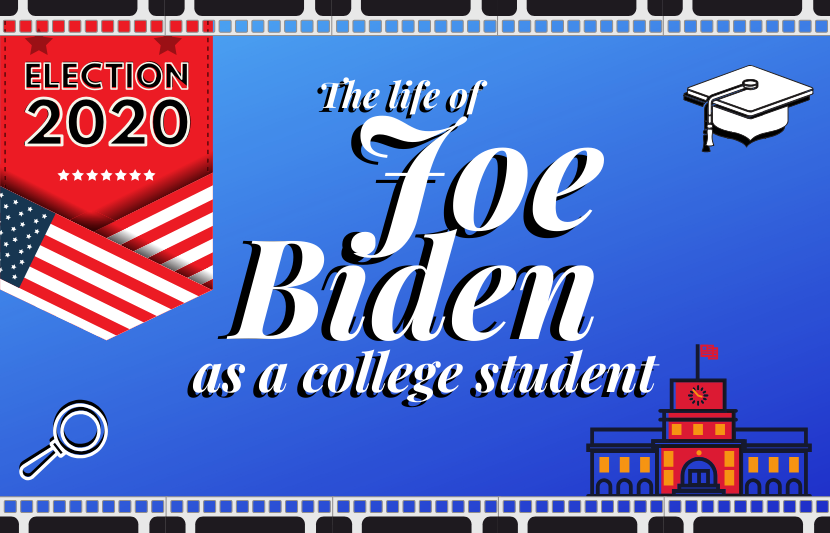 Joe Biden’s higher education story is quintessential. After graduating from the exclusive Archmere Academy, a private school in his hometown of Claymont, Delaware, the former vice president and current Democratic presidential candidate pushed his way through undergraduate and eventually law school, meeting his first wife along the way.

At Archmere, Biden was a standout student and leader amongst his peers. He was elected class president both his junior and senior years.

And on the athletic field, Biden was equally, if not more, impressive. As a three-sport athlete and star halfback, he led Archmere’s football team to an undefeated season his senior year.

“Blessed with boyish charm, athletic agility, a dazzling smile, and the quick and overflowing gift of gab, young Joe tap danced through an elite Catholic prep school,” Jules Witcover, a long-time political journalist wrote in his biography “Joe Biden, A Life of Trial and Redemption.”

Biden’s high school friends remember him as a trailblazer, frequently speaking of environmental issues and condemning the embedded racism of the late fifties and early sixties.

“He was an early environmentalist, and in high school in the sixties, he was more concerned about desegregation in Delaware than I was,” David Walsh, Biden’s best friend in high school, told Witcover for Biden’s biography. “I for one was mindless about it, but he led some protests,” Walsh added. “Joe would talk about it. At the Charcoal Pit, a hangout for everybody else, blacks weren’t allowed. He noticed; I never did.”

Upon graduating from Archmere, Biden carried his boyhood charm, smarts, athleticism and forward-looking political beliefs to the University of Delaware (UD), where he double-majored in political science and history, played on the freshman football team, and became the president of his freshman class.

Although most of his teammates on the football team were members of the Theta Chi fraternity, Biden never joined. He would go to fraternity parties to socialize, as he has always loved to do, but he never smoked or drank.

Biden has a history of substance abuse in his family, which left a permanent stain on his perception of things like alcohol and cigarettes. At times, he even had trouble tolerating others using them around him.

Witcover writes about this in Biden’s biography. He describes an instance where Biden, who was known to be a bit of a lady’s man in college, was on a date with a woman he had recently met. As soon as she lit up a cigarette, he gave her an ultimatum: throw it out the window, or the date would be over. “I knew the relationship wasn’t going to go very far,” she later said.

Biden, with a Catholic school background and aspirations to go to law school and eventually enter politics, always dressed in professional attire. His typical daily garb that he’d wear to class and around campus included a pair of penny loafers, a sweater, a nice shirt and occasionally a sport coat.

From a young age, he would often tell people that it was his goal to reach the U.S. Senate and eventually become president.

But despite his high ambitions and outfit to match, Biden struggled academically at UD, particularly early on. In his autobiography “Promises to Keep: On Life and Politics,” he’d blame this on being a “little too interested in football and meeting new girls.”

Whatever the reason, after seeing his first semester grades, Biden’s parents told him he wouldn’t be playing spring football.

“The first two years, I just didn’t buckle down,” Biden wrote in his autobiography. “I was even put on probation for hosing down an RA with a fire extinguisher. I spent a lot of time in the lounge with my friends, where I could always find a good argument.”

By the beginning of Biden’s junior year, he was worried that his slip-ups early on would keep him from being able to talk his way into a good law school. So, he turned to a young political science professor, David Ingersoll, for advice. Ingersoll set him straight, telling him to buckle down or he’d have no shot.

“Once I made the commitment, I did,” Biden wrote in his autobiography. “I carried 37 hours the next two semesters with decent grades, even while taking another run at the football team. I hadn’t played for two years, but I surprised the coaches by moving up the depth chart fast.”

Once spring came around, Biden, with resurging confidence, went down to Fort Lauderdale, Florida, with some of his friends for spring break. But Biden, who didn’t drink, quickly became bored with the spring break culture. So, he and his friend Fred Sears put what little money they had, most of which came from their recent tax returns, towards a plane ticket to Paradise Island in Nassau, Bahamas. The trip, for Biden, would be life-changing.

On Paradise Island, Biden would meet his first wife, Neilia Hunter. After spotting her sitting poolside, he rushed over to say a word or two.

“Basically, I fell ass over tin cup in love — at first sight,” Biden wrote in his autobiography. “And she was so easy to talk to. She was in school at Syracuse University, right down the road from her hometown, Skaneateles, New York. She was just two months from graduation and hoped she’d be teaching at a junior high school in Syracuse that September.”

Upon their return to the United States, Biden and Hunter continued to see each other. Biden, blinded by love, quit the football team once more and structured his next semester of classes so that he would have Fridays free, allowing him to go visit Hunter in Syracuse every weekend.

It became clear where Biden would apply to law school.

“With Neilia part of my future, I was even more focused; I took my schoolwork more seriously than ever,” Biden wrote in his autobiography. “And I wrote my senior thesis on a congressman from the Hunters’ district in New York State. I felt it was prudent to get to know the political landscape in upstate New York in case Neilia really wanted to stay home.”

Biden’s hard work paid off. In March of 1965, a letter of acceptance to Syracuse University Law School arrived at his parents’ house. And with a bit of financial aid from Syracuse and the state of Delaware, Biden was able to afford his $3,600 annual tuition.

Early on, Biden had a good time at Syracuse. He joined an intramural football team, got a job as an RA, and, most importantly, was able to spend time with Hunter.

But, just like at UD, Biden saw his grades slip.

“Joe Biden wasn’t hitting the library on very many Saturday nights,” Biden wrote in his autobiography. “To me, law school was just like college; all I had to do was get through to graduation, and I could get moving on real life. The work didn’t seem so hard, just boring, and I was a dangerous combination of arrogant and sloppy. I’m not sure I even bought all the books I was supposed to have first semester. And I was a less-than frequent visitor to class. Once a week, I’d ride home with Clayton Hale, and he’d hand me his notes to copy.”

About six weeks into his first term, Biden was accused of plagiarizing a portion of one of his papers. His plagiarism was not intentional; he just had improperly cited a passage. So, the deans and professors didn’t ask him to leave, but he did have to retake the course.

“The truth was, I hadn’t been to class enough to know how to do citations in a legal brief,” Biden wrote in his autobiography.

Several weeks after graduating, Biden received a letter in the mail from William Prickett, senior partner of Prickett, Ward, Burt & Sanders, extending a job offer. Despite typically hiring from Georgetown, Harvard and Yale, Prickett decided to take a chance on Biden, who self-described as “a guy from Syracuse with lousy marks.”

It was the start of Biden’s professional career.

In 1970, at age 28, Biden would win his first political election to become a member of the New Castle County Council. And in 1972, Biden would be elected as one of Delaware’s U.S. Senators, beating an incumbent Republican. He became the sixth youngest senator in U.S. history.