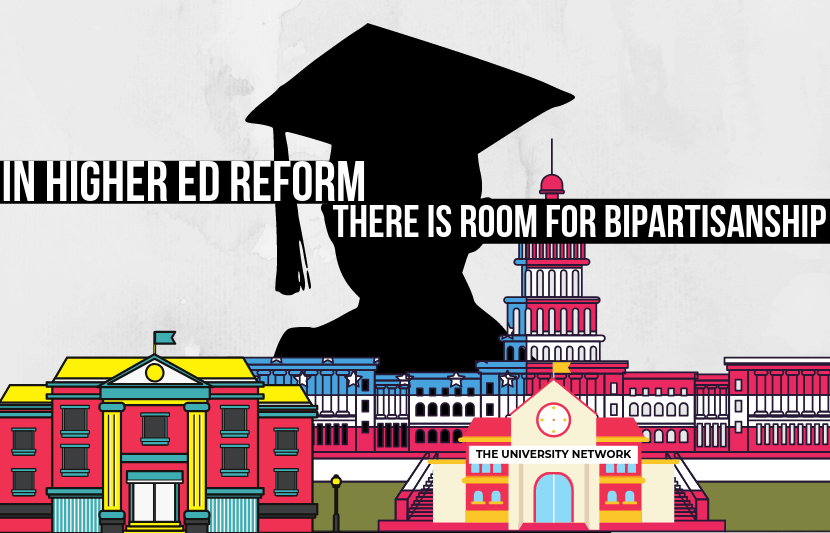 As it does with nearly every political topic, U.S. mainstream media has attached partisanship to higher education.

Recently, the overwhelming narrative surrounding higher ed has been that Democrats champion free college above everything, and Republicans refuse government involvement no matter the issue.

However, results from a new national survey conducted by Third Way, a center-left-leaning think tank, suggests free college isn’t Democratic voters’ main concern, and when it comes to the most pressing issues in higher education, Democrats and Republicans are more like-minded than they’re given credit for.

“Voters have a lot more nuance than the national media likes to play up,” said Tamara Hiler, the deputy director of education at Third Way and co-author of the survey.

However, both sides of the aisle still recognize the need for change. Largely, they want to see implementation of stronger “federal guardrails” to the higher education system to guarantee that students are on track to graduate and earn a job.

Notably, 85 percent of Democrats and 74 percent of Republicans included in the survey said the federal government should stop subsidizing institutions that aren’t adequately preparing students for graduation and for well-paying jobs. The authors of the survey note that there are many higher education institutions with graduation rates under 10 percent that are currently accepting government grants.

“(Voters) believe that institutions can and should do more to provide value to the students they are supposed to serve — not just enroll them and cash their checks, but get them to graduation and equip them with the skills they need to get a good-paying job and pay off their loans,” Hiler and her fellow co-author Lanae Erickson, Third Way’s senior vice president for the social policy and politics program, wrote in their report.

“That’s why, as this poll shows, there is widespread bipartisan support for implementing stronger federal guardrails across the entire system to make sure that both students and taxpayers are getting a real return on their huge investment in higher ed,” they continued.

Although it may be hard to believe, college and university administrators tend to agree. Many of them would also like to see institutions being held accountable for their outcomes, Hiler explained.

Findings from a previous Third Way survey back up this claim. The survey found that seven in 10 higher education leaders agree the federal government should put up guardrails to prevent students from taking out loans at “predatory institutions” that will leave them in a worse place than they were when they first enrolled.

“Institutions also want to make sure that the bad actors aren’t giving all institutions a bad name,” said Hiler. “Especially if there is pervasive narrative that college isn’t worth it anymore, I think that institutions really want to do right by their students, and there is room for those improvements.”

However, when it comes to Democratic voter priorities, free college is not all that high on the list, according to the survey.

In regards to addressing the overwhelming cost of college, Democrats showed more support for ideas like increasing Pell Grants, creating new grant programs for low-income students and students of color, and allowing students to trade a year of public service for a year of tuition, than they did for free four-year college.

And what’s potentially more surprising is that Democrats even prioritized issues such as accreditation reform and increasing student data transparency over free four-year college.

“At the end of the day, Democrats understand that regardless of what students pay or borrow to attend college, it won’t fix the problems in our higher ed system if the institutions they attend fail to make them better off than if they hadn’t attended in the first place,” Hiler and Erickson wrote in the report.

For some time, Republicans have been recognized by the mainstream media for wanting to restrict government oversight in education, but in this survey, it’s clear that they support accountability policies that would require handing more power to the federal government.

Seventy-eight percent of Republicans in the survey said they would support the government restricting federal aid to institutions with a graduation rate below 15 percent.

What’s also noteworthy is that 73 percent of the surveyed Republicans said  they would support measures to increase Pell Grants to address high tuition costs, and 72 percent said they would support the federal government withholding resources from higher education institutions that don’t spend at least a third of a student’s tuition on teaching.

What should be done?

The findings from this survey suggest that, when it comes to higher education, there is room for bipartisanship.

Both Democrats and Republicans largely agree that crippling tuition costs and poor student ROIs (return of investment) are two of the primary issues plaguing higher education.

Therefore, there is a tremendous opportunity for beneficial change that would appease people on both sides of the political spectrum.

“This makes (it) clear that the building (of) a higher education system that is more accountable for the success of its students (is) not only the right thing to do, but a winning political strategy, too,” Hiler and Erickson wrote in the report.