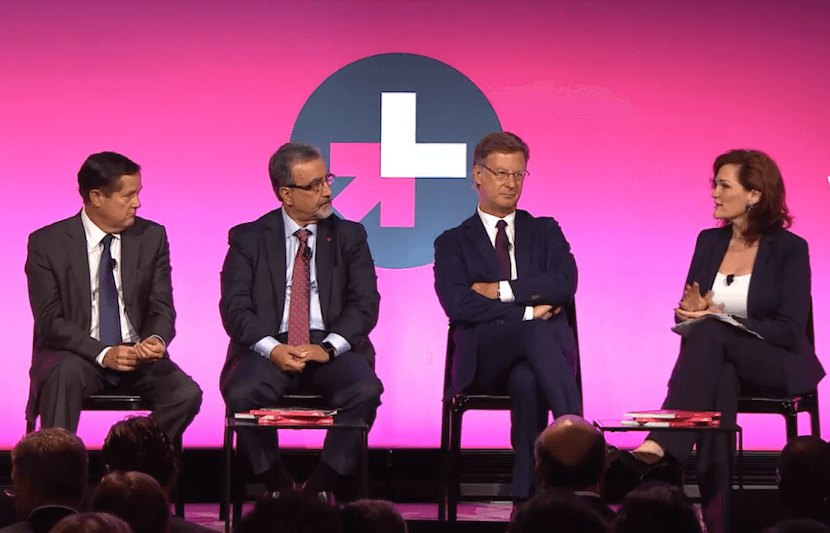 Today marks the third anniversary of the launch of the HeForShe movement, which was created by UN Women, the UN entity for gender equality and empowerment of women.

The movement takes a unique approach in that it specifically includes men and boys as partners in women’s fight for gender equality around the world, motivating them to become agents of change and acknowledge that they, too, have something to gain when gender equality is achieved.

It is therefore fitting that the 30 global leaders who had embraced the movement — all men — should  meet today at the HeForShe IMPACT 10x10x10 Parity Report Launch event in New York City to share their progress in advancing gender equality.

The HeForShe movement launched IMPACT 10X10X10, a program calling on 30 global university, business and government IMPACT champions to bring about real change from top-down. Each sector has 10 leaders who serve as visible champions for change and commit to bring progress within their own organization.

The IMPACT champions were selected based on their reputation for strong ethical practices, their demonstrated excellence in public service, their global reach and relevance, and their willingness to use their full footprint and influence to drive and inspire change across their sector.

Today’s event was attended by all IMPACT university champions other than Kenyatta University.

Five heads of state were present: the presidents of Malawi, Romania, Rwanda and Finland and the Prime Minister of Japan.

Several IMPACT champions shared their stories today — the progress they’ve made, the hurdles they’ve faced, the solutions they’ve found, and their plans for pushing gender equality forward in their organization.

President of Malawi Arthur Peter Mutharika shared a touching story of what it took to end child marriage in his country, which allowed over 1500 girls to return to education. In a statement issued prior to the meeting, he noted:

While the stories vary, the underlying message is the same. Gender equality is crucial, and the key is to drive change from the top of each organization, whether it’s the head of state, CEOs of corporations, or presidents of universities.

The universal theme is that true change will only happen when men and boys embrace the message. It’s only through working together that we can, for example, eradicate the practice of child marriage that’s still prevalent in some countries, put an end to sexual-based violence, and banish unequal pay, and achieve gender equality.

“I always said if Lehman Brothers had been Lehman Brothers and Sisters, the collapse would not have happened,” Shinzo Abe, Prime Minister of Japan, said during his presentation today.

Andrew Wilson, CEO of Electronic Arts, echoed the sentiment when it was his turn to share his company’s contributions.

“When all of us commit to equality, regardless of gender identity, real change is possible,” he said.

Each of the IMPACT university champions shared his experience on the road to promote gender equality and common themes emerged.

“Stony Brook University engages students from the day they arrive on our campus,” Stanley told The University Network (TUN).

Stanley has made gender equality at Stony Brook University a priority since he became an IMPACT champion. His goal is to bring real change by focusing on three key areas for improvement:

A key topic discussed today was gender-based violence, which the panelists agreed is a serious concern for students around the world. There was a consensus among the university champions that raising awareness by way of workshops, training sessions, and outreach programs is key to combatting sexual violence.

“All of our efforts as an Impact Champion in the HeForShe movement are bringing us closer to a campus community that eliminates the scourge of inequality and gender-based violence,” Stanley told TUN.

Similarly, John DeGioia, President of Georgetown University, noted in a statement issued prior to today’s event:

“For me, the university is a privileged place, where education is a powerful instrument to develop long-term transformative changes of behaviors to address social issues such as violence against women and all types of discriminations.”

Each of the IMPACT champions has promised to encourage other universities to take up the cause.

“It is our hope that you take the ideas discussed here and bring them back to your campuses to stimulate further discussion,” Stanley told the attendees that day. “The work you do today is extraordinarily important, not just for Stony Brook and SUNY, but for all of America and the world.”

“Gender equality is not a women’s issue,” Wilson said during his presentation. “It is a human right.”

It is clear that each IMPACT champion believes this, and is committed to drive gender equality.

“The results announced in today’s IMPACT 10x10x10 Parity Report are inspirational,” Mlambo-Ngcuka said in a statement.

“In 2015, I challenged the Champions to ‘think big’ and commit to creative approaches that tackled the greatest barriers. We know that incremental steps do not bring us the benefits that we so urgently need. As leaders in their fields the Champions hold the key to breaking norms and making game-changing progress for both women and men. The report shares strategies, roadblocks and successes so others can follow suit.”