A group of students at Creighton University in Omaha, Nebraska, has successfully built a second EnergiPlant — a photovoltaic system and USB charging station where students can power their devices and socialize on campus.

This new EnergiPlant looks like a 12-foot tall metal flower, and was the culmination of the group’s coursework for the university’s Energy Technology Program, which is touted as “a very unique program exploring the critical field of energy in a collaborative, hands-on environment.”

Each bloom on the flower doubles as a wind turbine, and the four metal leaves are embedded with solar panels that together produce about 300 watts of power.

The “plant” is positioned near a major walkway on campus and between two benches lined with six USB ports for students to stop and charge their electronic devices.

“This second ‘plant’ serves as a beacon of sustainability on our campus for students, staff, faculty and the community,” said Andrew Baruth, associate professor of physics, who teaches the Energy 131 course. “As a device charging station, along with seating, it invites students to choose an outdoor location for studies and gathering with no loss of access to energy. At the same time, signage on the EnergiPlant works to promote education of sustainable energy production.” 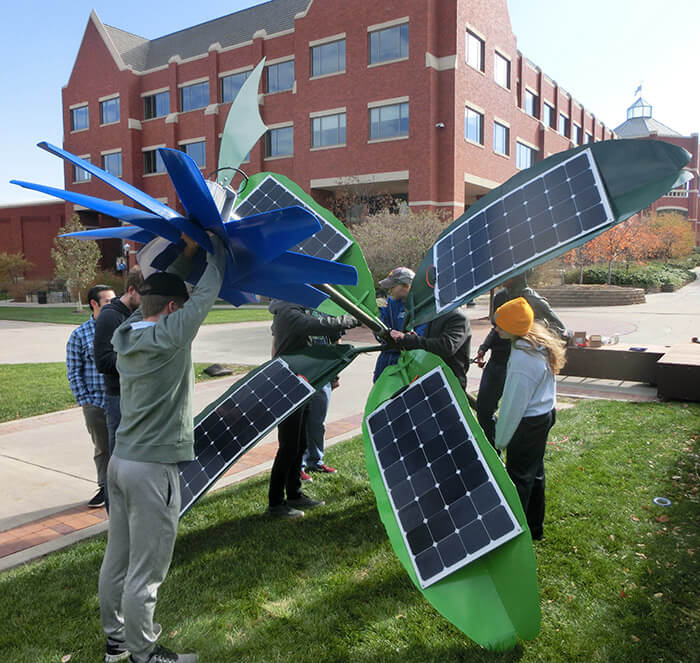 The project was created as the major assignment in the Energy 131 course, which is the first course freshmen students encounter within the Energy Technology Program.

The course begins with a weeklong retreat that takes place before freshman year and continues for a few weekends in the first semester as part of the major construction project.

The retreat consists of hands-on electronics education, including: building circuits that include photovoltaics, working on an 85 kW solar array, inspecting wiring, measuring production, and repairing any identified issues.

After this year’s retreat, students came together to start construction on the final project — the EnergiPlant — which was sponsored by the Omaha Public Power District, and used components parts supplied by PrimoWind, a company based in California.

“Students do all of the siting, as well as the assembly and wiring of the parts, which are manufactured by PrimoWind,” said Baruth. “In working with PrimoWind, I identified all assembly components that would be academically advantageous to my students and ensure those components remain ‘un-wired’ or un-assembled upon delivery. The final construction took approximately 16 hours.”

Energy 131 has incorporated a major project for the past six years, identifying renewable energy technology that will be both interesting to students and academically challenging.

The first EnergiPlant was built on campus as the construction project by Energy 131 students last fall.

Both the retreat and the project provide an integral and practical exercise for students to see solar and wind power at work, said Baruth in a statement.

“It’s probably been the most rewarding class I’ve taken at Creighton so far, and that’s saying a lot because we are challenged and given practical applications here,” Adams said in a statement.

“Talking to potential employers about internships, I’m able to talk not simply about what I’ve learned in classrooms or read in books, but about the working knowledge I’ve acquired and the practical application of that knowledge,” he said in a statement. “That’s what has made this project so rewarding for all of us.”