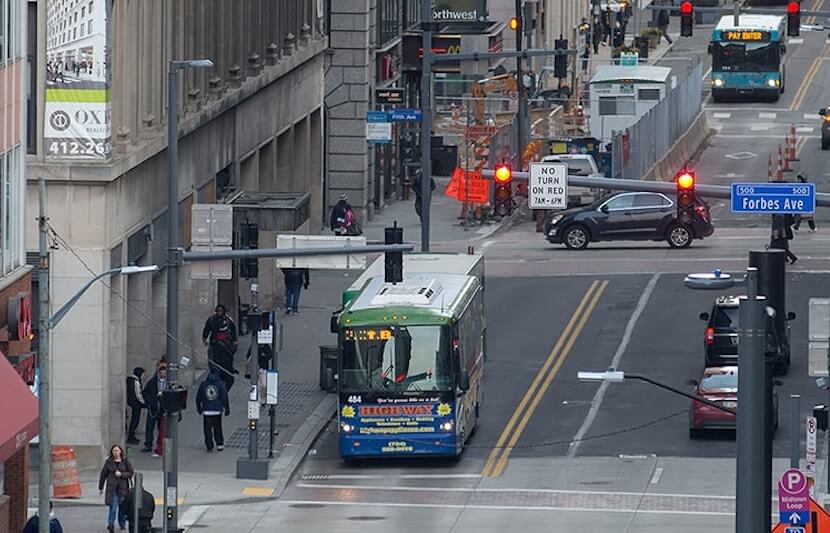 Scientists at Carnegie Mellon University (CMU) have installed smart traffic signals to monitor and conduct traffic lights at select intersections in a pilot area in Pittsburgh. The technology uses existing cameras and radar systems to track traffic in real time. Then, an artificial intelligence (AI) uses algorithms to determine the best way to move the cars through. The traffic plans are recalculated every few seconds by the computer installed at each intersection. What’s more, each computer feeds information about incoming traffic flows to its neighbors at surrounding intersections.

Stephen Smith, professor of computer science at CMU, is the creator of this traffic-conducting software — Surtrac (Scalable Urban Traffic Control) — that combines AI and traffic theory.

In June this year, Smith won an international award, the Le Monde Smart Cities Global Innovation Award, for Surtrac. He has since licensed the technology and launched a spinoff company, Rapid Flow Technologies, with the support of CMU.

Smith has demonstrated that his system decreases travel times by 25 percent, reduces idling time by 40 percent, and decreases vehicle stops by 30 to 40 percent. The system also helps improve the environment, as it lowers emissions by over 20 percent.

Smith was inspired to focus his efforts on reducing traffic congestion when Henry Hillman, an entrepreneur and philanthropist local to the Pittsburgh area, gave seed money to CMU in 2009 to finance Traffic 21, a traffic optimization project using AI.

“My research group had been working for many years in the area of multi-agent planning, and felt that this sort of approach would provide a strong basis for real-time adaptive signal control,” Smith said.

The project’s location was an added incentive for Smith. “For me personally, I have lived in Pittsburgh for the past 35 years, and it was a great opportunity to do something that would have a direct positive impact on the place where I live.”

The project started with the installation of Surtrac in just nine intersections in 2012. Now 100 intersections use the system, and the project is expected to cover more intersections with the award of $10.8 million grant received by the city from the U.S. Department of Transportation.

Smith and his team are currently taking a 2-pronged approach to further improve the flow of traffic.

First, they are “integrating [their] signal control system with connected vehicle technology and using vehicle-to-infrastructure (V2I) communication to enhance mobility,” Smith said. Basically, this involves connecting the on-board computers in vehicles to the stoplight control system as an added data source for AI to make decision about traffic flows.

Second, they are focusing on “safe and efficient management of pedestrian traffic flows,” Smith said. The team, he explained, has “just started a project within the Federal Highway Administration’s Accessible Transportation Technology Research Initiative (ATTRI) aimed at developing a mobile app that will allow pedestrians with disabilities to communicate directly with the intersection and actively influence signal control decisions.”

Having an app that helps pedestrians cope with traffic would certainly be helpful, but how would it work?

Smith explained that the app will learn individual’s intersection-crossing speed and communicate with the computer running the intersection in order to ensure that pedestrians have enough time to make it safely across. The app will also monitor pedestrian’s progress and adjust the timing of the lights as necessary to increase traffic safety.

He believes that smartphone technology and its relative ubiquity will be a massive resource for people-to-infrastructure (P2I) communication, such as the app mentioned above, or the detection of road damage via cell phone images. The main focus going forward for him and his team at CMU is the integration of smartphones with traffic infrastructure to maximize the data sources available to the AI responsible for making the decisions regarding traffic flows.

Smith and his team will march forward guided by the “broader idea of using smartphone technology and P2I communication to provide a robust, economical solution to the pedestrian detection problem.”