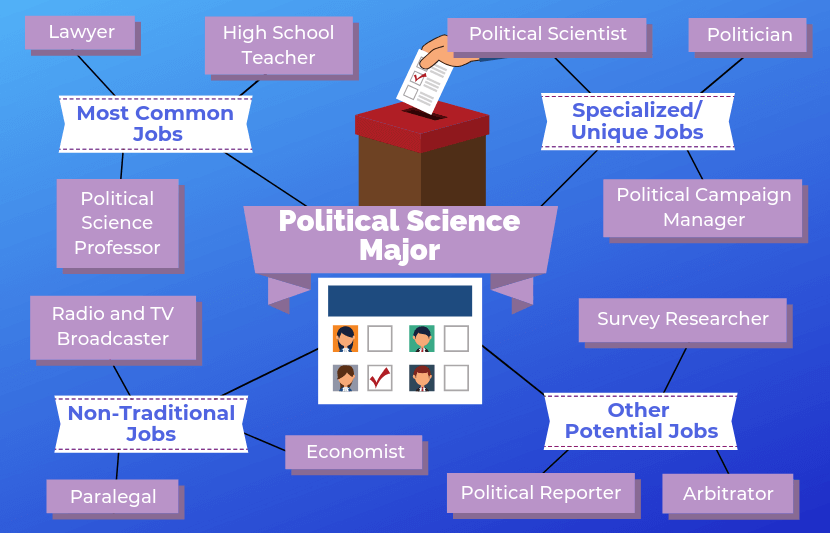 Here is a list of 12 possible jobs for political science majors:

After earning a bachelor’s degree, those who aspire to teach in high schools have to complete an internship in a school classroom, pass the state-required test for teachers and receive a teaching certificate/license.

If you are dead set on being a teacher, the best advice would be to major in education. But if you’re still uncertain about what you want to do, a degree in political science could ultimately help you land a job teaching government and/or history. As long as your degree is in a related field to the classes you aspire to teach, you will be okay.

Likelihood that robots will take your job: 1%

Patience, communication, organization and enthusiasm are some of the most important characteristics of a good college professor. To earn a job teaching at the post-secondary level, a master’s degree (and sometimes a doctorate degree), is required. In addition to teaching, some college professors also conduct research and write scholarly articles.

Likelihood that robots will take your job: 3%

Political science is connected to law, so many political science majors go on to become lawyers, but, to do so, completing a bachelor’s degree program is just the first step. If you want to become a lawyer, you will also have to pass the Law School Admissions Test (LSAT), apply to law school, earn a Juris Doctor degree and pass the Bar examination — all before you can begin to practice law. Generally, it takes 3 years to graduate from law school, so the entire process takes 7-8 years. If you’re interested in earning your master’s degree in political science while working towards your Juris Doctor degree, some universities, including Duke University, offer joint programs.

Likelihood that robots will take your job: 4%

Political scientists’ day-to-day responsibilities vary depending on where they work. But more broadly, they analyze the origins and changes in political systems. They also can be tasked with developing political ideas and strategies, which can be passed on to politicians. Political scientists can work for the government, non-profits, think tanks and more. Some institutions will hire staffers right after they finish their political science bachelor’s degree, but a master’s degree, along with work experience through an internship or campaign, will open up better job opportunities.

Likelihood that robots will take your job: 4%

Technically, anyone could consider themselves as a politician, but to have a legitimate career in politics, there are many preparatory steps. The first is developing an understanding of the Constitution and the governmental system through pursuing a bachelor’s degree in political science. But after that, aspiring politicians will often have to network, volunteer on other people’s campaigns and develop their own political passions and strategies all before running for even small, local positions. Running for office takes time, money and commitment. But once you’ve earned a position and have developed a name for yourself, you can gradually start running for more prestigious roles in state and national government.

Likelihood that robots will take your job: N/A

While it is important for campaign managers to have a background in political science, they also need to be skilled marketers, organizers and communicators. They are responsible for managing a staff of people whose primary goal is to have their candidate voted into office. They often are in charge of creating events, leading fundraising, allocating spendings and running media relations, among other tasks. If the politician they represent wins office, sometimes they are invited to join his or her staff, but campaign managers and staffers are often left without a job after election, win or lose.

Likelihood that robots will take your job: N/A

Radio and TV broadcasters have to be fun, clever and interesting enough to attract listeners and viewers. This job pairs well with political science majors, for much of broadcast news is centered around reporting politics. A background in political science will help broadcasters formulate rational, logical opinions instead of just regurgitating information.

Like many other occupations, broadcasting isn’t something you can just jump into. To get a sense of the industry, people interested in broadcasting should apply for internships. There is much more that goes into broadcasting than what the public sees on TV or hears on the radio.

Likelihood that robots will take your job: 7%

Before, or instead of, attending law school, some political science majors work as a paralegal. Typically, paralegals work at law firms and help lawyers by researching, drafting and organizing legal documents. They are also sometimes referred to as legal assistants. Aspiring paralegals need to have at least an associate’s degree and, in some cases, a paralegal certificate to earn a job.

Likelihood that robots will take your job: 94%

Economists are employed by a variety of institutions, including governments, universities, think tanks, corporations and private research firms, to evaluate economic issues. They spend their days conducting qualitative and quantitative research for organizations in an attempt to solve economic issues or better understand the function of the economy. Depending on their employer, an economist’s duties and role might vary. For example, an economist working in government might formulate policy proposals, while an economist working for a private corporation might help the company understand how the economy might affect its business or develop strategies that will help it perform better. Advancement in the field requires a master’s degree or a doctorate, but there are entry-level positions available for candidates with only a bachelor’s degree.

Likelihood that robots will take your job: 43%

Arbitrators help two opposing parties settle a dispute outside of court. The meetings that they are responsible for leading are often private, confidential and more laid back than a formal trial in court. While they aren’t always necessary, a master’s degree and/or a Juris Doctor degree will help aspiring arbitrators receive respected positions within their field. However, to receive an arbitrator license, some states require that you have a law degree. Additionally, arbitrators usually have an expertise, such as construction, labor or employment that might require further, more specific education. Professional arbitrators can be found and selected for services on the American Arbitration Association (AAA) website, among other places.

Likelihood that robots will take your job: 6%

Technically, there is no required degree to become a reporter, but you will have a hard time finding a job without one. Skilled reporters are master storytellers with strong writing and grammar skills. To learn the essential skills, most aspiring reporters study journalism in college. However, political reporting is one of the most important and popular fields of journalism. A degree in political science can equip people with the knowledge they need to write in-depth, accurate political articles.

Likelihood that robots will take your job: 11%

In politics, there is a high demand for all types of data on voting trends, demographics, political opinions and more. Survey researchers are the ones responsible for developing methods to collect that data. While a degree in political science can help survey researchers analyze and process information, additional education in statistics or mathematics may be necessary to earn a job.

Likelihood that robots will take your job: 23% 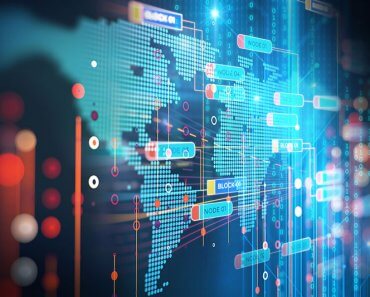